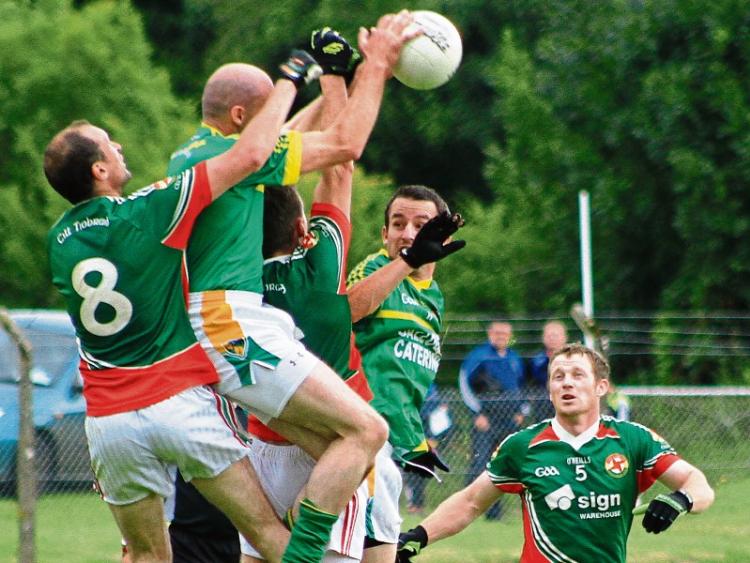 A tale of two halves, a tale of two teams mixing the brilliant and the awful and at the end of it all, Drumreilly emerged with an absolutely crucial one point victory in Cloone.

Kiltubrid trailed by eight points at halftime and were lucky to be that close as Drumreilly gave an exhibition of long range scoring that was simply staggering to witness.

But a recommitted Kiltubrid increased the physical battle in the second half and took the game to Drumreilly in a contest that many predict is for third place in a very tough group. And if it was, it was a game played with the real fervour and intensity of knockout football.

That fervour spilled over at the end when Kiltubrid’s James Gill received a red card for throwing the ball after a free went against him while Declan Maxwell, in the process of helping injured former county team-mate Shane Foley, was struck by a water bottle flung by an incensed Kiltubrid man once the final whistle sounded.

It was a bitter end to a hard fought encounter, one that doesn't do justice to the efforts of both teams, but on the balance of play, Drumreilly just about deserved their victory as only a case of the yips in the second half saw their excellent accuracy desert them.

The long range kicking of Drumreilly was a joy to watch in the first half and if they can replicate it again in other matches, then watch out as Drumreilly have the ability to score from everywhere.

And it wasn't just one player as Raymond and Brian Fee, Conor Gaffney, Dylan Mimna and Donal McCabe all scored wonder points.

Kiltubrid too deserve a lot of credit - they were absolutely nowhere near the pace in the first half, second best everywhere to an amazing Drumreilly who really should have had two goals in that half.

The first of those goal chances came after just a minute when Conor Gaffney blazed high over the bar when he got in behind the Kiltubrid defence in the first minute with only the keeper to beat.

Brian Fee and Graham Taylor immediately added monster long range points in the next two minutes and the tone of the first half was set. Emmet Mahon converted a free for Kiltubrid but Donal McCabe thumped a 45 yard shot over the bar in reply.

Patrick Whitlow played a one-two to burst through but his blistering shot glanced off the crossbar and went over. Raymond Fee then hit three unanswered points, one free and two finishing off great passing moves with long serving veteran Olly Maguire providing the final pass.

Gaffney got in behind the defence again but with only the keeper to beat, blazed his shot well wide but Drumreilly kept the scoreboard ticking over with points from Raymond Fee, Frank Holohan and Dylan Mimna.

Emmet Mahon put over a well worked score in injury time to leave Kiltubrid trailing 0-11 to 0-3 at halftime. Judging from the noise of the halftime team-talk, a lot of hard truths were spelled out in the Kiltubrid dressing room and they came out a more physical and fired-up team in the second half. James Gill (free) and James Holohan swapped points before Gill put over another free.

Kiltubrid dramatically got themselves back in the game when Stephen McLoughlin cut in along the endline and blasted a great shot to the back of the net on 10 minutes.

Both sides missed good chances and Drumreilly looked to have weathered the storm when Gaffney put over two points in the space of four minutes to leave them six clear with less than 11 minutes to go.

But Kiltubrid had the bit between their teeth and three bad Drumreilly wides coupled with two Emmet Mahon frees started to increase the pressure. Conor Prior, taken off in the first half but brought back on, kicked a lovely point to leave the gap at three points.

The scores weren’t coming quickly for Kiltubrid and just before the 30 minutes elapsed, Emmet Mahon scored a huge effort from the wing to cut the gap to two points.

One minute of added time was announced but when that 60 seconds elapsed, Mahon put over another free to leave the minimum between the teams.

Kiltubrid tried to engineer one more chance but when they were penalised for a heavy challenge on Conor Gaffney as he came out of defence, James Gill reacted badly and received a red card from referee Cyril McKeon over two minutes into added time.

When the free was taken, the final whistle sounded, prompting a furious reaction from the Kiltubrid bench before order was restored on the field.