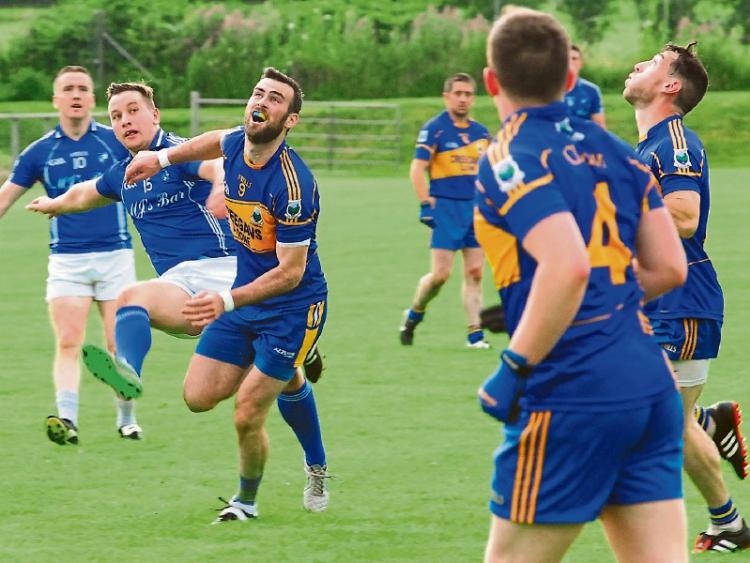 The opening round of championship fixtures can be full of nerves given what is at stake meaning Carrigallen will care little that their victory over Cloone in Ballinamore last Saturday evening was low on quality.

The opening stages of the encounter proved to be very cagey and full of mistakes as both Cloone and Carrigallen failed to seize the early initiative.

Carrigallen were arguably the better team during the opening, disjointed, 10 minutes but they were unable to reflect that superiority on the scoreboard and it was Cloone who opened the scoring with a fine score courtesy of Eoin Keegan.

Carrigallen had a chance to equalise three minutes later but Gerald Percival saw his effort sail wide of the Cloone goal. Fortunately for Carrigallen referee Kevin Mallon play was brought back for an infringement by a Cloone defender and Percival slotted the resulting free over the bar.

Cloone regained the lead in the 19th minute of what was up until that point at least, a dull and inspiring contest, when Gavin Reynolds converted a free. Reynolds' free, struck from the 45 metre line was precision personified but it was the run from Declan Tiernan before he was fouled that was particularly eyecatching.

After a drab opening 20 minutes, the final 10 minutes of the half saw a significant improvement in the quality and entertainment levels. Carrigallen got back on level terms in the 20th minute when some excellent, fast and precise passing involving Tiernan O'Rourke, Daniel Lyons and Sean McCabe resulted in Gerald Percival scoring his and Carrigallen's second point of the game.

Carrigallen then took the lead for the first time when Marc Dolan pointed after winning the ball in midfield and then exchanging passes with Tiernan O'Rourke.

Carrigallen were now on a roll and they extended their lead with points from Ciaran Reilly and Gerald Percival before Cloone's Gavin Reynolds completed the first half scoring with a 26th minute point.

Trailing 0-5 to 0-3, Cloone looked a dangerous attacking force in the opening stages of the second half and levelled matters with two converted frees from Gavin Reynolds.

The importance of a win for both sides meant the game became quite cagey once more with only two more points - from Carrigallen's Ciaran Reilly and Cloone's Gavin Reynolds (free) arriving in the next 12 minutes.

The closing stages saw an increase in the tempo as both sides looked to find an extra gear that would set them up for an opening day victory.

Carrigallen edged back in front when Percival converted another free with nine minutes to go and three minutes later he scored another free to put his side on course for victory.

Cloone kept persevering but other than the free taking of Gavin Reynolds, they had few threats that seriously worried the Carrigallen rearguard.

Injury time saw the reliable Gavin Reynolds and Gerald Percival convert frees for their respective sides but it was Carrigallen who emerged with a two point margin of victory.