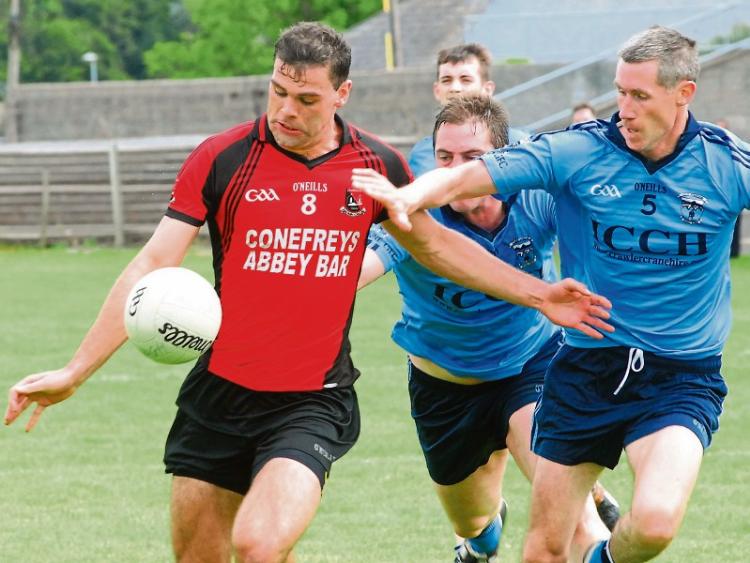 Fenagh made their championship ambitions clear when they hammered neighbours Eslin by 17 points in Sunday’s Group 2 game in Páirc Seán.

Eslin drew first blood when Jamie Stenson put over a free within 36 seconds of the throw-in. But that proved to be the only time when Eslin led as three minutes later Ryan O’Rourke hit back with a Fenagh free.

Fenagh struck for an eighth minute goal when Richard Heaney gave keeper Eanna Turbitt no chance. Fenagh continued to set the agenda with Martin Doonan firing over a pair of points with Tomas Beirne replying with a 12th minute point for Eslin.

But Fenagh increased their lead by eight points over the following eight minutes as Ryan O’Rourke added four unanswered points, one from a free. Eslin reduced the deficit by two points by the 23rd minute when Tomas Beirne soloed 30 yards to score while Jamie Stenson whipped over a 45 metre free.

Fenagh’s Michael Doonan and Eslin’s Scott Hunter kept the scoreboard ticking over with a point apiece but after beating three defenders a minute later, Ryan O’Rourke fired home a goal that put Fenagh firmly in command.

The goal rush continued with Michael Doonan hitting the back of the net in the 29th minute after a rebound when keeper Enda Turbitt made a stop from Donal Wrynn.

Adrian McCaffrey provided a small ray of hope for Eslin within a minute when he shot his side’s only goal before Martin Doonan and Jamie Stenson (free) swapped points, leaving Fenagh leading by 3-9 to 1-6 at halftime.

Fenagh continued to dominate with Darragh McHugh and Ryan O’Rourke whipping over points each by the 35th minute while Eslin keeper Eanna Turbitt had to make a smart save to deny a Donal Wrynn goal chance in this period.

Eslin’s Ronan Reynolds answered these scores three minutes later with a point from a ‘45’ conversion. But Fenagh ensured by the end of the third quarter that there would be no way for Eslin after Michael Doonan rammed home a fourth goal and Ryan O’Rourke added two points.

At the beginning of the final quarter Eslin experienced a slight resurgence when they scored four unanswered points after Jamie Stenson (free), Shane Beirne, Thomas Beirne and Scott Hunter all pointed.

Fenagh finished with a flourish in the final ten minutes when they added six unanswered points in the remainder of the action. In this spell Richard Heaney and Ryan O’Rourke shot two Fenagh points each while Donal Wrynn put over a ‘45’ and Aaron McLoughlin added a point.