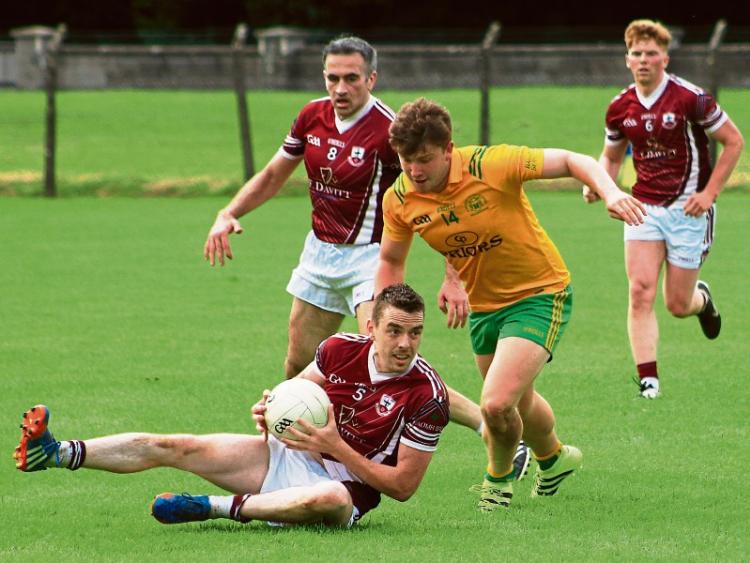 Already installed as favourites, Sean O’Heslin’s delivered a comprehensive case for just that as they demolished Drumkeerin in Cloone in impressive fashion last Saturday.

Driven on by the excellent McGovern brothers and the outstanding Shane Moran, a well balanced and focussed Sean O’Heslin’s recovered from a slow start and bossed this game right to the finish.

After losing the last two Intermediate Finals, it will take a side full of fitness and ability to stop Ballinamore such is the potent mix of weapons available to the Ballinamore men.

Shane Moran took a heavy knock in an accidental collision. That meant manager Paul Prior moved the county man into the full-forward line and that unfortunate knock paid unexpected dividends.

Moran bossed everything in the full-forward line, pounced for a goal and was involved in a succession of scores. The switch also paid off for Dean McGovern who dominated in the middle of the field and gave O’Heslin’s a huge platform.

Mark McGrory impressed with huge work-rate and no little skill, full-back Oisin McCaffrey looks as if he is born to a problem position while Donal Feely and Keelan McHugh really stood out.

Drumkeerin started off like trains and in Cathal McCauley, they have a forward with huge threat, the only one to cause the defence real problems. The north Leitrim men battled but they lacked the strength in depth and O’Heslin’s Division One pedigree showed in their pace and organisation.

Drumkeerin got off to a blistering start with three points inside two minutes, Colin Clarke, Cathal McCauley and Aidan Dolan all scoring wonderful points. But a great Donal Feely point under pressure on five minutes settled O’Heslin’s.

Peter Reynolds had a nice point and despite a couple of wides, Ballinamore took control when Shane Moran fielded a long free, held off his man, turned and fired low to the left corner on 10 minutes.

Drumkeerin failed to score for the rest of the half as Ballinamore fired over eight unanswered points from Mark McGrory (2), Shane McWeeney (three frees), Niall and Dean McGovern & Keelan McHugh.

O’Heslin’s should have had a second goal only for Peter Reynolds and Niall McGovern to both hit the woodwork while Kevin Forde made a great save to deny Reynolds a second time.

O’Heslin’s led 1-10 to 0-3 at halftime but Drumkeerin hit three points in the first 10 minutes of the second half from Jamie Langan (free), James Gallagher and Patrick McHugh but two Niall McGovern points kept the winners in control.

Cathal McCauley briefly raised hopes with a ferocious goal on 13 minutes but despite a point from the Drumkeerin man, O’Heslin’s killed off the game with points from Shane McWeeney, Shane Moran, Dean McGovern and Luke Murphy (free).

McCauley finished Drumkeerin’s scoring with a great point but Ballinamore finished with points from Reynolds (2) and Luke Murphy to complete a facile win.