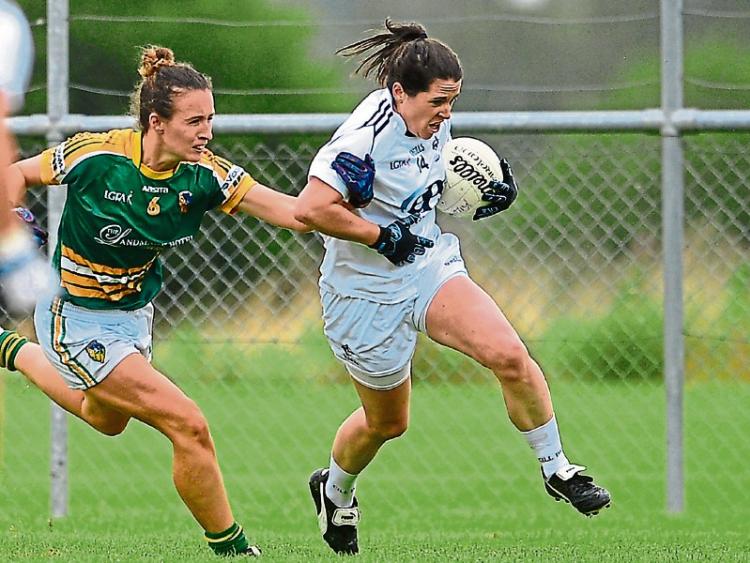 Leitrim's hopes of glory in the TG4 All-Ireland Ladies Intermediate Championship came to an end on Saturday last at the quarter-final stage against Kildare on Sunday afternoon last in Kinnegad.

After a slow start Leitrim came roaring back as they brought the game to the Lillywhites and enjoyed a two point lead at the interval.

However, Kildare started the second half with renewed purpose and opened up a seven point lead before Leitrim laid siege to the Kildare goal in the closing stages in a vain attempt to salvage something from the game.

Straight from the throw-in Leitrim looked to take the game to their opponents. Aine Tighe won the throw-in and quickly released the ball to Lorraine Brennan who in turn found Michelle Guckian who dissected the uprights with a composed finish.

Leitrim failed to build on that bright start as Kildare hit back and took the lead with pointed frees in quick succession from Ellen Dowling and Roisin Byrne.

During the early stages, Leitrim had difficulty securing possession from their own kick-outs and that led to Kildare's third point of the game as Erika Burke won possession and then the ball was worked forward by Eadaoin Connolly and the finishing touch was applied by Noelle Earley.

It was to get even worse for Leitrim as Kildare struck for the game's opening goal in the fourth minute. Aisling Holton picked out Eadaoin Connolly whose speculative shot looped over Leitrim goalkeeper Michelle Monaghan and just under the crossbar.

Despite their slow start, Leitrim showed no signs of panic and immediately set about the task of getting themselves back into contention.

Aine Tighe's searching free was kept in by Michelle Guckian who then played a dangerous ball across the face of the Kildare goal. The slightest of touches from a Leitrim player would have resulted in a goal but Kildare's Shauna Kendrick cleared the danger.

A minute later, Leitrim were presented with another sight of goal but uncharacteristically with only Kildare goalkeeper Mary Hulgraine to beat, Aine Tighe's shot hit the post and went wide.

Those two misses could have seen Leitrim heads drop but instead they seemed to grow in confidence from the fact that they were enjoying more possession and asking real questions of the Kildare defence.

With the game still just 10 minutes old, Leitrim struck for a goal that signalled their arrival in the contest. Michelle Monaghan's kickout was fielded by Ailish O'Dowd and worked forward to Aine Tighe and then on to Michelle Guckian who finished emphatically to the Kildare goal.

Leitrim were now playing with more confidence and they reduced the deficit to three points when Aine Tighe converted a free and it was to get better from a Leitrim point of view in the 17th minute when the Green & Gold pounced for a second goal.

Roisin Fowley did very well to make herself available and having won possession she showed great awareness to deliver the ball long to Michelle Guckian who then sidestepped her way past the Kildare goalkeeper and slotted the ball into the unguarded goal.

After Kildare's early dominance, Leitrim took the lead in the 18th minute when Aine Tighe pointed but Kildare, who had gone 11 minutes without a score replied with two points from Ellen Dowling (one free) either side of a Noelle Earley point to give the Lillywhites a two point advantage with seven minutes of the half remaining.

Michelle Guckian and Maria Moolick exchanged points in quick succession before Leitrim regained the lead with their third goal of the half. Michelle Guckian and Anna Conlan combined well with a clever exchange of passes allowing Guckian the space to get a shot away. She was very unlucky to see her shot crash off the Kildare crossbar but the quickest to react was Aine Tighe who dispatched the rebound to the net.

The first half scoring was completed by Michelle Heslin, with Anna Conlan once again heavily involved before Heslin pointed to give Leitrim a 3-5 to 1-9 lead at the break.

Having finished the first half so strongly, it was hoped Leitrim would be able to begin the second half in a similar fashion but it was Kildare who were quickest out of the blocks after the break with three unanswered points inside the first four minutes from Eadaoin Connolly (two) and Roisin Byrne.

Such was Kildare's start to the second half they should have been further ahead but made amends for a number of bad wides in the 11th minute of the second half when they struck for their second goal with Maria Moolick scoring from close range.

Leitrim's fightback began with a Roisin Fowley point and was followed up with an excellent point from Aine Heslin but Leitrim's chances of reclaiming the lead were dealt a real blow when Aine Tighe was sin-binned with 14 minutes remaining.

Pointed frees from Kildare's Roisin Byrne and Michelle Guckian for Leitrim meant there was just two points between the teams but in the final minute of the sin-bin Kildare struck for a further 1-2 to open up a seven point advantage just four minutes left.

To their credit, Leitrim refused to throw in the towel and laid siege to the Kildare goal, with full-back Mary Farrell's forward runs typifying the urgency within the team.

Kildare goalkeeper Mary Hulgraine saved a late Michelle Guckian penalty after a foul on Aine Tighe but Roisin Fowley was on hand to score from the rebound.

Unfortunately, Leitrim were to run out of time as they sought to further close the gap as Kildare saw the game out to claim their place in the semi-final.