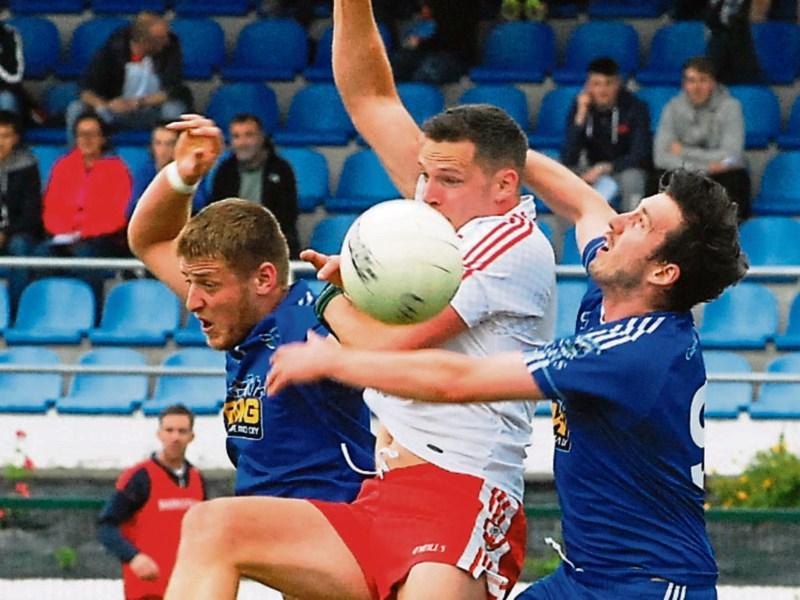 Melvin Gaels comfortably booked their place in the last eight of the Connacht Gold Leitrim Senior Championship on Saturday evening last in Drumshanbo when they proved much too strong for a disappointing Dromahair.

With both sides having won their opening games, a victory for either side would have guaranteed a place in the quarter-finals but from very early on it only ever looked it would be the Kinlough side who would emerge victorious.

All over the pitch Melvin Gaels were simply too good for Dromahair as they played with an intensity that Dromahair couldn’t match.

Melvin Gaels almost made the perfect start to proceedings but were denied a second minute goal when Dromahair goalkeeper Stephen O’Hara did very well to flick the ball free from the grasp of Darragh Rooney who was on the verge of sidestepping the netminder only to see the ball disappear from him as he was readying himself to shoot.

Rooney’s confidence wasn’t affected by that miss as he opened the scoring moments later when he converted a free and he doubled his side’s advantage with an excellent point from 35 metres.

After a lacklustre start Dromahair opened their account in the seventh minute when Robbie Cunningham’s diagonal ball released Gary Fowley who worked the ball on to his favoured left boot and applied a fine finish.

However, Melvin Gaels were having a field day in midfield where Dromahair were missing the presence of the injured Rory Kelly and they re-established their two point lead when the midfield partnership of Conor Sheridan and Jesse McGuinness combined to find Thomas Lipsett who scored his side’s third point.

A Matthew Cleary pointed free opened up a three point lead for Melvin Gaels before Dromahair enjoyed their best spell of the game.

Kevin Conlan converted a free after Gary Fowley was fouled and in the twelfth minute the deficit was down to the bare minimum when Conlan pointed again after good work from Paddy McGowan.

Conor Sheridan and Kevin Conlan (free) exchanged points midway through the half but that was to be as close as Dromahair would get to their north Leitrim rivals as Melvin Gaels entirely dominated the remainder of the contest.

After Liam Ryan bombed forward from wing-back to put two between the sides Melvin Gaels upped the intensity and 13 minutes before the break scored the game's opening goal with Jesse McGuinness on target after a well timed pass from Fabian McMorrow.

A black card for Shane Ryan was the only negative for the Gaels but Dromahair were struggling to gel as an attacking unit and were looking vulnerable in defence. A Gary Fowley free increased their tally but already the game appeared to be gone from them.

In the final minute of the half Melvin Gaels put the result beyond doubt when Darragh Rooney scored his side's second goal and in injury time he added another point to give his side a commanding 2-11 to 0-5 lead.

The second half proved to be a straight forward affair with Melvin Gaels in the favourable position of being able to introduce the experienced duo of Stephen McGurran and David McSharry from the bench and a black card for James Bredin had no bearing on the final outcome.

Paddy McGowan opened the second half scoring for Dromahair after a Jamie Conlon pass but Melvin Gaels quickly hit back with points from Darragh Rooney (free) and David McSharry.

Paddy McGowan helped the Dromahair supporters raise a cheer when he found the Melvin Gaels net with a piledriver of a shot from 20 metres but it never looked like having any bearing on the final outcome.

Melvin Gaels were finding scores much easier to come by and added to their lead with points from Matthew Cleary and David McSharry, with Jamie Conlon replying with a solitary score for Dromahair.

Stephen McGurran got in on the scoring act with a 47th minute point which was cancelled out by a Gerard Kelly point before Melvin Gaels pushed on once more and scored three unanswered points courtesy of two from Matthew Cleary (one free), and Jonathan Connolly.

Dromahair completed their scoring with a fine effort from the talented Gary Fowley but Melvin Gaels were not yet finished and they linked up very well when Matthew Cleary scored their third goal of the game with four minutes left to complete a comprehensive victory.