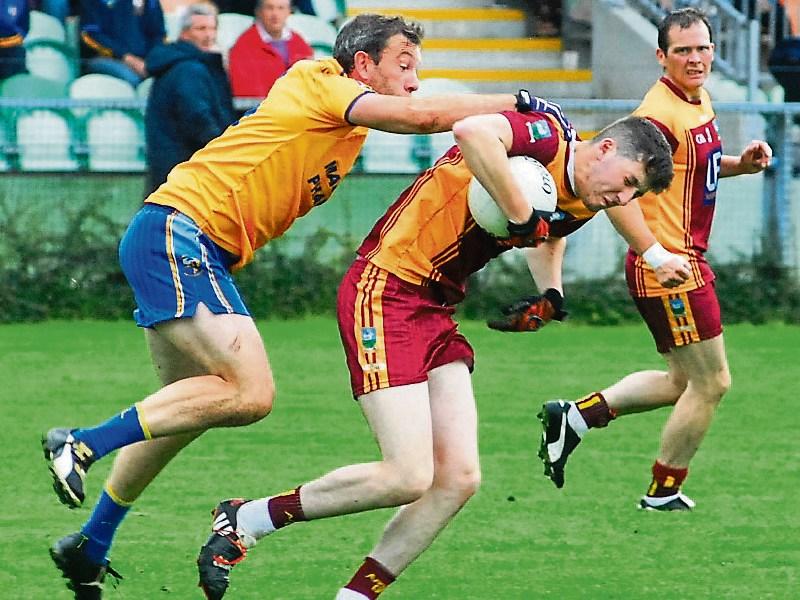 Recording a second championship win, Glencar/Manorhamilton survived to claim a narrow victory against a thirteen man Annaduff side in Saturday’s competitive tie in Ballinamore.

Annaduff, who led for almost all of the third quarter, gave the North Leitrim something of a fright. Perhaps if Annaduff had not been reduced to 14 players in last quarter the final outcome might have been different for them.

Glencar/Manor got off to the better start with Anthony McDonald putting over a point just 32 seconds after the throw-in while James Glancy and Conor Dolan (from a free) added a point piece within the next two and half minutes.

But Annaduff reduced the deficit to the minimum by the 7th minute after Sean McNabola and Ray Cox both shot over from play. Over the next nine minutes Brian McDonald for Glencar/Manor from play and Joe Cox from a free traded points at opposite ends.

Aaron Hickey, after getting a ball from a quickly taken James Glancy free, shot over from 45 metres to edge Glencar/Manor into 18th minute O – 2 lead. But a minute later Sean McNabola made it a one point game with an Annaduff point from play.

Joe Cox levelled the proceedings when he converted a 22nd minute Annaduff free. Over the next two minutes Glencar/Manor managed to restore their 0 – 2 advantage once again when Conor Dolan tapped over a free and Anthony McDonald shot over from play.

Glencar/Manor’s Ronan Flynn received a 26th minute yellow card. A swapping of points at opposite ends occurred during the next two minutes of action with Annaduff’s Joe Cox and Glencar/Manor’s Anthony McDonald (with a goal chance) exchanging scores.

Before halftime Annaduff lifted their game and got back on level terms with free conversions by Joe Cox and Sean McNabola. Then a resurgent Annaduff took the lead for the first time in the game when McNabola shot over from play to give his side a 0-9 to 0-8 interval advantage.

The Annaduff men doubled their lead within four minutes of the restart when Sean McNabola’s well hit 40 metre free split the Glencar/Manor uprights. Four minutes later Conor Dolan reduced the deficit to the minimum for Glencar/Manor when he shot a point from a placed ball.

A Sean McNabola 40th minute free restored Annaduff’s two point advantage before Glencar/Manor’s Killian McGriskin was sent for an early shower when he was black carded and replaced by Gerry Hickey.

After that Glencar/Manor responded determinedly by upping their game and got back on level terms by the 44th minute with Aaron Hickey and Conor Dolan in turn hitting the target from play for the North Leitrim men.

Another Conor Dolan point from play a minute later put Glencar/Manor back in front for the first time in sixteen minutes. Annaduff were reduced to 14 players when Nigel Cox saw red, following an off the ball 47th minute incident.

This perhaps was the turning point in the game as Glencar/Manor forged ahead over the next nine minutes with unanswered points by Conor Dolan, James Glancy and sub Niall Brady, who fisted over his effort in this sequence.

However Brady’s point proved to be Glencar/Manor’s final score with Annaduff raising their game in the final minutes of the action and halving the North Leitrim sides lead thanks to two Sean McNabola free conversions.

Referee Brendan Sammon was busy on the disciplinary front before end of the game when he issued Glencar/Manor’s Shane Loughlin and James Rooney with yellow cards while he reduced Annaduff to 13 players when he straight red carded David Duignan.