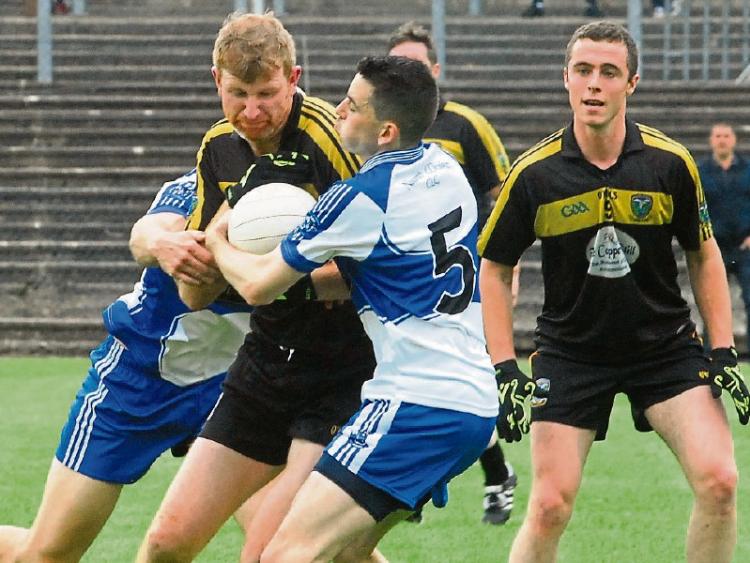 In what attained the status of a must win game, St. Mary's Kiltoghert prevailed but not without a major scare from Bornacoola.

Bornacoola would have looked better placed after a narrow loss to Dromahair but St. Mary's put a poor display against Melvin Gaels behind them as they battled and scrapped for every inch in what was generally a poor encounter.

Bornacoola had some outstanding performers in Gary McCloskey, Damien Moran & Trevor Howard but they looked off the pace in too many sectors of the field and couldn't deal with the speed and running power of the Carrick men.

It is, however, a performance unlikely to scare too many of the top contenders as St. Mary's looked vulnerable in defence and missed a succession of chances that they should have put away.

But what they do have is pace and the potential to score and the victory on Saturday sets St. Mary's up for a clash with Dromahair where a point will guarantee them a place in the last eight.

The game got off to a bad start for St. Mary’s with a game ending injury for Gary O’Daly and three bad misses and Bornacoola made them pay with two Trevor Howard points in their first two attacks.

St. Mary’s replied with points from Ray Mulvey and Daire Farrell but as both sides missed chances, Damien Moran scored a great point on the turn from 40 yards to put Bornacoola in front but an Alan Doherty free tied the scores once more after 19 minutes.

The Carrick men continued to miss chances, one shot short, two hitting woodwork and one wide before Moran repeated his Bornacoola heroics with a huge point to put his team back in front.

The lead, however, was spectacularly wiped out when Ray Mulvey broke in behind a scattered Bornacoola defence, striding through unopposed before brilliantly side-footing the ball from about 15 yards to the far right corner, giving the keeper no hope at all.

Bornacoola, to their credit, refused to lie down and a Trevor Howard free along with another Moran point left the sides level at halftime, 1-3 to 0-6, as St. Mary’s continued to waste some good chances.

However, Mary’s went back in front less than half a minute after the restart when Mulvey scored a fine point but that lead was spectacularly wiped out three minutes in when Damien Moran made a huge catch and drove past James Glancy.

His pass found Trevor Moran free in front of goal and he planted a great shot low to the left hand corner of the net. St. Mary’s wasted two good chances to tie the scores and Bornacoola looked in control when Howard put over a free.

But St. Mary’s started to fight back with Robbie Lowe scoring a huge point under pressure and Brian O’Donnell scoring a neat effort after a one-two with Farrell. St. Mary’s went back in front with a great deal of luck when Daire Farrell’s shot spilled out of the hands of Gerry Gearty and crossed the line.

Despite that cruel setback, Bornacoola fought back with Howard swapping scores from placed balls with James McGrail before Howard put over a great effort from play and another free as St. Mary’s continued to miss chances.

That left the teams level with less than eight minutes to go but St. Mary’s hit back almost instantly, a long ball finding Daire Farrell who scored from a tight angle. Barely a minute later, a poor kickout was fielded by Robbie Lowe who fed Michael Corrigan for a huge point.

Ray Mulvey then scored a lovely point on the break with less than four minutes remaining and as Bornacoola started to visibly tire, Alan Doherty hit two good frees to stretch the lead out to five points before Farrell scored a wonderful point from a tight angle in injury time.