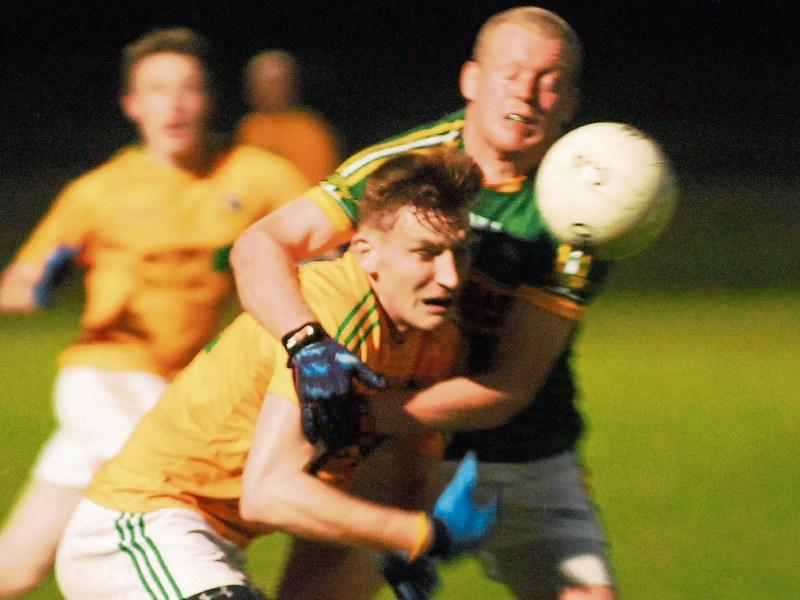 Gortletteragh may have gone home on Friday night ruing missed chances but Mohill demonstrated again just why they are the champions.

Hit by a huge injury list and absent players, Mohill booked their place in the Quarter-Finals with a hard fought but comprehensive win over their neighbours Gortletteragh in an intriguing clash under lights in Cloone.

Gortletteragh missed enough frees to at least draw this match, more than a few of them from long range but Mohill can also point to four missed goal chances that really should have been taken in an exciting game.

Many felt that Mohill, without all their missing stars, would have been there for the taking but they met the challenge with style, their younger players starting to step up to the mark and leaving them looking incredibly strong when they get all their missing players back.

What is most impressive about Mohill is the confidence winning last year’s title has infused in a lot of their younger players and with strong leaders like Ronan Gallagher, Danny Beck and Ciaran Kennedy, the champions are in a great position for the knockout stages.

Gortletteragh now face a winner takes all clash in the last round with an Annaduff side who have impressed in their two games. But Gortletteragh will want to improve their accuracy as it let them down against the champions.

As is their want, Mohill started off powerfully and quickly, Keith Keegan pointing after less than 10 seconds as he charged straight down the middle before a storming run from Caillin Canning set up a second Keegan point before two minutes had elapsed.

Padraig Tighe and Cathal McCrann missed frees while Fiachra McGuinness shot wide before James Campbell got Gortletteragh off the mark with a point on nine minutes.

Mohill should have goaled on ten minutes when Alan Armstrong, at full-forward, made a great catch, turned his man but blazed wide of the far post with the goal opening up for him but they did point when Keegan’s pass set up Shane Quinn for a good point under fierce pressure.

Cathal Quinn scored a typical point, bursting through two or three players to score a minute later but as both teams missed chances and David Mitchell saw an effort blocked, Fiachra McGuinness scoring a lovely point.

Mohill again threatened a goal but keeper Conan Clarke did well to block a pass intended for Armstrong and they made it pay when a break after a poor Mohill free came to James Campbell who scored a monster point on 18 minutes.

Padraig Tighe converted a free but the game changed when a searing run down the middle from Oisin Madden punched a hole in the Gortletteragh defence, his pace taking him clear of an attempted tackle and he laid the ball off for Shane Quinn who blasted the ball to the net.

Gortletteragh continued to miss chances but they did have a point from a McCrann free that left the halftime score at 1-5 to 0-4 in favour of Mohill, a lead quickly extended by a Padraig Tighe fifty three minutes into the second half after McCrann had missed his own fifty.

Both teams missed chances but Gortletteragh were starting to get a grip on the game but despite another McCrann free, the former county keeper missed two chances while they came very close to a dramatic goal when sub Jack Heslin drove a blistering shot just inches wide via a deflection.

From the resulting fifty, Ciaran Egan took over the place kicking duties and he fired over to cut the gap to three points but Gortletteragh were extremely lucky that it remained that as Madden and Caillin Canning cut through their defence like a knife through butter, the ball coming to sub Alan McLoughlin who saw his shot brilliantly saved by Conan Clarke.

The resulting fifty was wide but Alan Armstrong pointed after the ball broke for him with 11 minutes to go. Mohill were now cutting gaps in the tiring Gortletteragh defence and Caillin Canning gathered a quick free and scored a great point on the run.

Gortletteragh hit back with an excellent 35 yard effort from Francie Flynn with less than five minutes to go but that was to be Gortletteragh’s last score and Mohill really should have had a second goal, again, when Fiachra McGuinness’ shot was easily saved as another goal chance went abegging.

The match became scrappy and disjointed but Domhnaill Flynn ensured victory when he converted a point in the last minute to seal the victory.