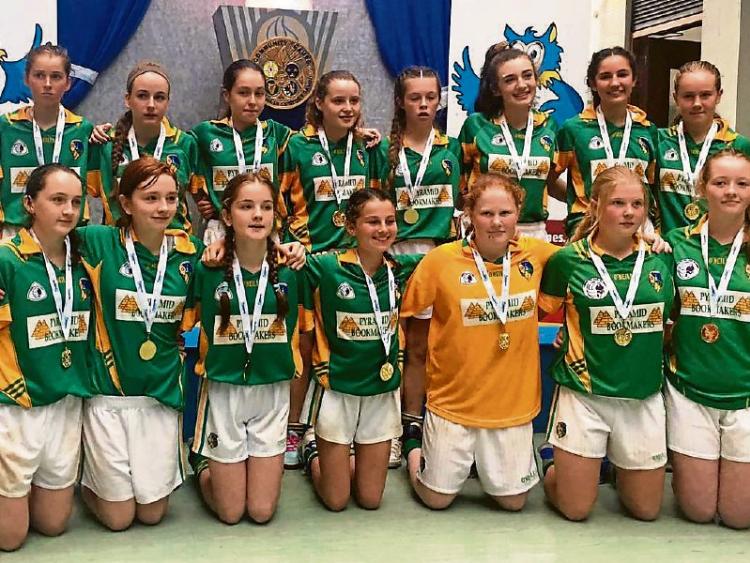 Manorhamilton Area claimed their second All-Ireland Community Games Gaelic Football title in two years last Sunday when they added the U14 crown to the U12 crown won two years ago.

There were high hopes for the Manorhamilton U14 girls as this team were previous gold medal winners at the national finals two years ago at U12 level and had graduated from Connacht with relative ease, beating Kiltoom 3-8 to 0-2 in the semi final and Breaffy 10-5 to 2-4 in the final.

The All-Ireland semi-final against the Ulster champions Sheelin of Cavan was no place for the faint hearted as this was a bruising affair where a battle had to be fought before any football could be played.

Muireann Devaney led the team and was in excellent form notching up six first quarter points in addition to a goal and a point from Leah Fox to Sheelin's two points. Sheelin started the second quarter very strongly and scored 1-4 to just three points to the north Leitrim girls.

The game was in the mix but the resilience shown by the four backs Hannah Gallagher, Hannah Johnston, Emma McMorrow, Clodagh McGee and sweeper Sarah McGloin provided the platform which limited the Cavan girls to only four further scores.

From the accuracy of goalkeepers Aine McCann’s and Kelly Gallagher’s kick-outs, the Leitrim girls were keeping possession better and scores duly came from Rachel Conlon, Muireann Devaney, Leah Fox and an excellent interplay between the latter two resulted in a goal at the end of the third quarter that had the Leitrim girls ahead by eight points. The Cavan team's cause was not helped with a sin binning of a Sheelin player for dangerous play preventing a certain goal.

The Leitrim girls held out in the final quarter as the Cavan girls went long in search of further goals, leaving the final scoreline of 2-17 to 2-8.

The final against Leinster champions Knocklyon was a free flowing and quick game where both sides were intent on playing football and moving the ball fast.

Knocklyon had the Leitrim girls on the back foot from the beginning scoring 1-1 in the first two attacks. The Leitrim girls regrouped with their opening score coming from the boot of Muireann Devaney followed by an excellent Amy Fowley point.

Muireann Devaney and Emily Conlon steadied the ship with two excellent team goals followed by a well taken Rachel Conlon point. This left the Manorhamilton Area girls with a 2-3 to 1-2 first quarter lead.

In the second quarter Sarah Brady and Shona Sheridan began to stretch the Dublin backline and with Mairead Clancy an outlet in midfield, both sides began to search for opportunities for critical scores but these were few and far between with two points for Leitrim’s Muireann Devaney to one point for Knocklyon the only scores in the second quarter.

Scores were hard come by for both teams again in the third quarter with Leah Fox netting for the Leitrim girls and the Dublin champions adding a point to their tally.

The deciding moments came in the last quarter with two quick fire goals from Captain Leah Fox leaving the Dublin girls trailing 5-5 to 1-4.

The back line was holding firm and further points from Emily Conlon, Muireann Devaney, Leah Fox and an outstanding goal from Roisin Kelly left the final scoreline of 6-8 to 1-6 in favour of Manorhamilton who lifted the title amidst great celebrations.