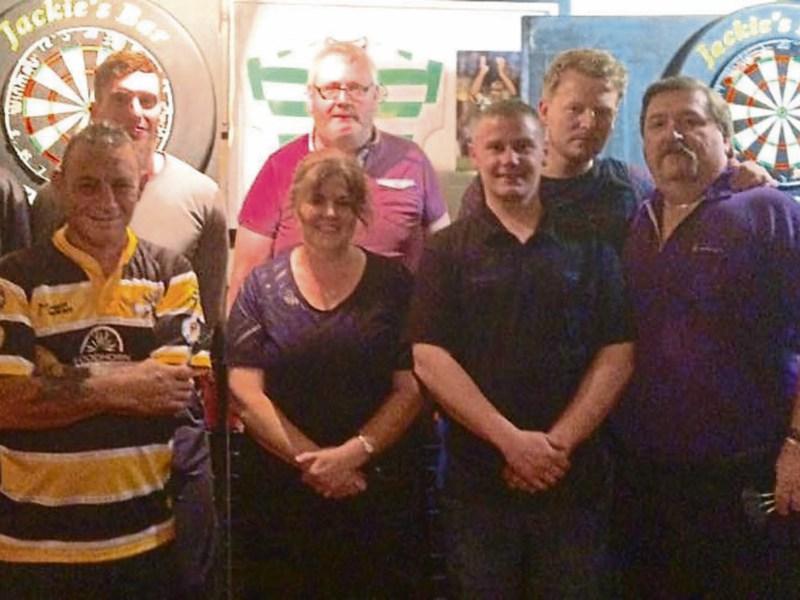 After eight weeks of stiff qualification and a total entry of over 220 players, finals night was a night of darts that will live long in the memory and especially for local talent Ray Mulvey.

The opening quarter-final saw Leitrim Masters Champion Wayne Roberts square off against the very experienced lady thrower Denise Cassidy of Fermanagh. Denise showed her class by racing into a 3-0 lead before she produced a lovely finish to advance to the semis 4-2.

The second quarter final between Longford's Joe Nevin and Tyrone's Colin Maxwell came down to a final leg shootout, Joe snatching victory from the jaws of defeat to progress 4-3.

In the third quarter final, Gary Hussey from Longford announced his presence against the vastly experienced Sean McGowan of Sligo. Hussey was flawless in his finishing but his power scoring had to be witnessed to be believed, winning 4-0.

The final quarter final saw Leitrim's Ray Mulvey face regular PDC tour player Campbell Jackson from Tyrone in a game that was level at three apiece but in a final leg that could have gone either way, Ray took his chance to the delight of the local support.

The first semi saw Ray Mulvey and Gary Hussey do battle. After the highs of taking out a 100 times capped Irish international, Hussey was knocked off cloud 9 as Ray eased into the final by a score of 5 legs to 2.

The second semi was closer and with Joe Nevin and Denise Cassidy tied at three apiece, Nevin held his form as pressure mounted on Cassidy to book his final spot 5-3.

In the final, Ray Mulvey would become Leitrim's first winner of this annual event. Power scoring throughout the final backed up by excellent finishing and a match average of over 90, saw Mulvey ease to victory by 6 legs to 0.

Presenting the prizes tournament sponsor and host Kathryn McTague thanked all entrants who travelled from eight counties to take part and tournament officials Pauline Crosbie and Ingrid McCaffrey for their help in making the tournament such a success.

A fundraising challenge recently took place in The Clubhouse Dromahair between Leitrim and Sligo to raise funds for The Northwest Hospice.

Both teams backed up by radio presenters James King (Shannonside FM) representing Leitrim and Francie Boylan (Ocean FM) representing Sligo in a special head to head match. Sligo would prove too strong for the hosts Leitrim.

In the battle of the radio presenters James got the better of Francie in what proved to be a highly entertaining game. The big winners on the day though were The Northwest Hospice. In total a sum of €5300 was raised on the day. Well done to all participants and organisers.

Our latest ranking event in The Clubhouse in Dromahair was the third of six County trials. After a round robin played out on 3 boards the following is the top 24 currently in Leitrim rankings.

Thanks to everyone who turned up on the day, to the clubhouse for their sponsorship and lovely food provided, and finally to Pauline Crosbie who as always oversaw all proceedings.

The next event on the calendar is a Ranking Singles event to be held this Sunday August 28, in McLoughlin's of Effernagh (Club F). Boards will be open from 5pm and first games off at 6pm. We would like to welcome Dermot McLoughlin on board and we look forward to working with you.