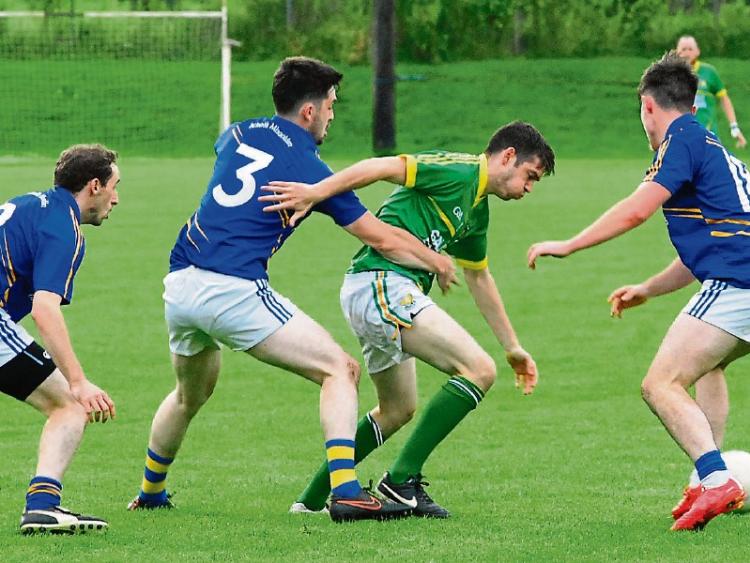 You'd normally expect blood and guts from this fixture but with both teams already qualified, Aughawillan cruised to an easy victory.

When these two neighbours meet, the game is usually feisty and full-blooded but with both already qualified for the quarter-finals and Drumreilly seemingly intent on minding some of their injured players, this game never developed into the contest we expected.

Aughawillan took full and frequent advantage of the lack of bite as they dominated most sectors and scored at will to end their campaign on a strong showing.

The opening exchanges didn’t promise much as both teams had some terrible wides with Raymond Fee missing a 14 yard effort before Conor Gaffney punished a foul on himself with the opening point on seven minutes.

Mark Plunkett then demonstrated his class by soloing across the 50 yard line before unleashing a huge shot over the bar and despite two more wides for Aughawillan, they went in front when Morgan Quinn collected a low pass, turned sharply, twisted and fired over on 13 minutes.

Drumreilly hit back when good intricate work from Gaffney and James Holohan saw a low ball into Francis Holohan who pointed on 17 minutes but that was the high point of the Drumreilly challenge as Aughawillan simply took over with six unanswered points.

Morgan Quinn availed of poor marking to win a long ball and score at his ease but he was denied a goal when Michael McGirl raced off his line to block his shot after Gary Plunkett had put his team-mate clean through on goal.

Ciaran Gilheany rounded his man to chip over followed by a great Mark Plunkett score before Pearse Dolan got on the end of a quick flowing move to point for Aughawillan.

Gary Plunkett then scored two lovely points as Drumreilly’s challenge seemed to evaporate despite a 55 yard free from Declan Maxwell just before halftime.

That left the halftime score at 0-9 to 0-3 and the game was as good as over, particularly as Gilheany scored a lovely point inside 60 seconds of the restart.

Conor Gaffney tapped over a free but a lovely passing move ended with Sean Quinn pointing on three minutes.

Morgan Quinn scored a lovely point from the corner while Gary Plunkett spun nicely to point a minute later.

The game then took a lull with Drumreilly seemingly not too pushed and Aughawillan in cruise control, James Holohan scoring a nice point on 12 minutes but again the Willies hit back immediately, Gilheany tapped over a free from the sideline and Morgan Quinn again finding himself with no marker to score.

Mark Plunkett almost found the net but his low shot skimmed inches wide before James Holohan was held up as he sought a goal, blasting the ball high over the bar.

Aughawillan would add points from Morgan Quinn (free) and Gary Plunkett, a lovely effort on the run, but Drumreilly put a gloss on the scoreline with two nicely taken James Holohan points before Conor Gaffney rounded out the scoring with an injury time free.