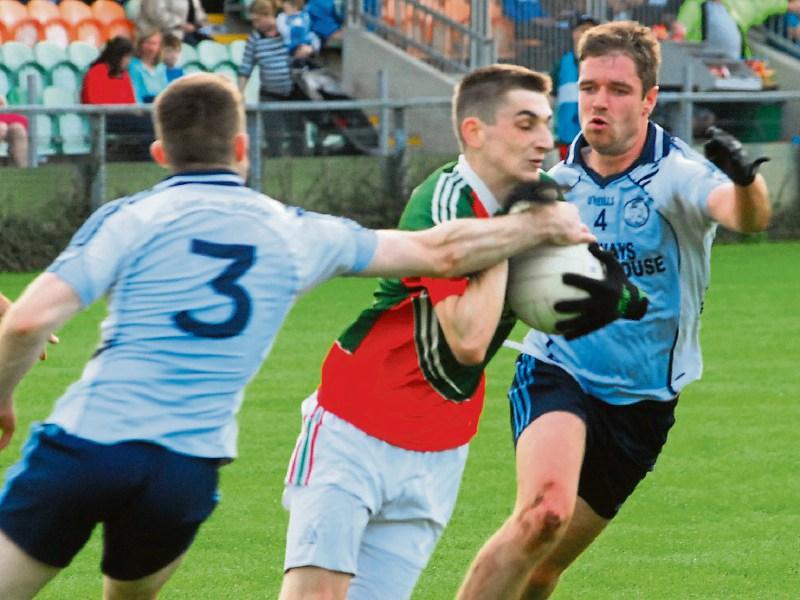 Less than 10 seconds of normal time was on the clock when Martin Rafferty plunged the dagger into Kiltubrid hearts to see Allen Gaels into the quarter-finals after an absorbing encounter in Ballinamore.

Kiltubrid almost defied their underdogs status as they led by a point with time almost up but Rafferty's dramatic goal edged the Drumshanbo men through a titanic encounter in Ballinamore.

Ciaran Walsh played the role of super sub as he energised an Allen Gaels side who looked at sixes and sevens at long periods against an inspired Kiltubrid who came oh so close to a famous victory. In a match that had yellow, black and red cards, there was drama aplenty but the Gaels deserve enormous credit for not giving up when all seemed lost.

James Flynn opened the scoring from a first minute free but Kiltubrid, after a James Gill free hit the post, levelled from an Emmet Mahon free. Poor misses were the order of the day early on. James Flynn put a free badly wide while holding off the ball spotted by referee Jimmy Stenson was punished with another Mahon free on ten minutes.

Allen Gaels looked as if the pressure was telling with missed chances for Martin Rafferty and James Flynn and Kiltubrid increased the pressure when a high ball was knocked down for Niall Foley point on 12 minutes.

James Flynn converted a free after a foul that Shane Foley was yellow carded but the first big moment came when Aidan Bohan was black carded for a ferociously heavy collision with Martin Rafferty on the sideline that sent the Allen Gaels man into his team-mate Kyle Flynn who had the ball.

Michael McCormack replaced Bohan but despite playing on, the Gaels were soon forced to replace a flattened Flynn who was wide open when the collision took place, Ciaran Walsh coming on.

Another card came when Jason Loftus was spotted fouling Mickey Earley, earning a yellow as the free was moved in, Mahon tapping over before Allen Gaels closed the gap after Shane Walsh hopped the ball twice before feeding Thomas Mulvey for a fine point.

Mahon restored the gap with a free but the game looked to have taken a turn in Allen Gaels' favour when James Flynn made a good catch from a high ball, turned sharply but saw his shot foot-blocked by Brian McKiernan, referee Stenson showing no hesitation in awarding the penalty.

Flynn unfortunately lifted his shot too much, firing the ball over the bar and it got worse when Jason Loftus was sent off, a black card following yellow for fouling Stephen McLoughlin with James Gill pointing the resulting free.

McLoughlin soloed through for a good point and Allen Gaels indiscipline cost them again when a free was moved in, Gill pointing to give Kiltubrid a 0-8 to 0-4 halftime lead.

Neither team made a change at halftime but we did have a new referee with Jimmy Stenson injured and linesman Michael McGirl stepping in as the man in the middle. Sub Ciaran Walsh started to make an impact, hooking a shot over his shoulder and over the bar via the upright on three minutes.

Pat Moolick replied with a spectacular left-footed effort after breaking through tackles but it was Allen Gaels who started to take over, despite Diarmuid McKiernan making a good save from Niall Foley.

Martin Beirne finished a nice move with a good point before Ciaran Walsh shrugged off his man to point on nine minutes and the game took another huge swing when Shane Foley received his second yellow card, James Flynn swinging over the free.

The Gaels were flying and Thomas Mulvey pointed after a good run from Ciaran Walsh before Martin Beirne surged down the middle, firing over to put Allen Gaels back in front.

Discipline was still proving costly, another off-the-ball foul on Earley saw James Gill tie the scores up at 0-10 apiece on 47 minutes but Allen Gaels should really have put the game to bed three minutes later when referee McGirl allowed advantage after a foul on James Flynn, the ball coming to Ciaran Matthynssens but the sub blasted wide from close range.

Dylan McGowan too should have found the net when he brilliantly fielded in behind the full-back but incredibly shot wide with only Michael McGirl in goal to beat.

Incredibly, Kiltubrid went back in front when a great run from Conor Prior found Keelan McKeon who passed the ball to Eamon Geoghegan who, as the prospect of a match-winning goal looked on, drove the ball over the bar with just over three minutes to go.

It may have been the chance that got away for Kiltubrid as a great move up the field ended with Matthynssens passing the ball in to Martin Rafferty who spun sharply and buried a low shot to the bottom right corner with less than ten seconds of normal time on the clock.

Credit Kiltubrid, they refused to give up and Emmet Mahon curled a free over the bar but they needed a win and Allen Gaels held out comfortably, so much so that Ciaran Walsh should have buried a late goal chance after robbing a defender deep into injury time.