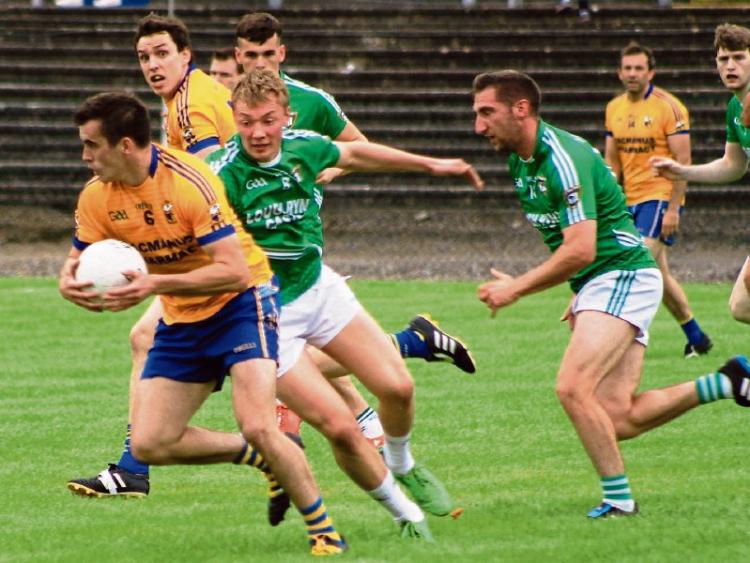 When theses sides clashed in last year’s senior championship final replay and senior league final, only a point separated them in what were very low scoring and dogged encounters.

The story was very different on Saturday evening as Mohill dominated the exchanges more or less from the start in a high scoring tie and forced Glencar/Manor to play second fiddle at all stages.

Keith Keegan fired Mohill into the lead when he put over a point just 20 seconds after the throw in. James Rooney fouled Alan McLoughlin six minutes later which yielded Mohill’s second point when Keith Beirne tapped over the free.

After a slow start, Glencar/ Manorhamilton got their game going when Anthony McDonald fired over a 13th minute point and the same player levelled the scores when he repeated the exercise a minute later.

Mohill responded by regaining the two point advantage after 17 minutes. A well hit Keith Beirne 20 metre free from near the sideline went over before Domhnaill Flynn fired over from play.

Over the next five minutes Manor’s Aaron Hickey with a long range effort and Mohill’s Keith Beirne from a 30 metre free traded points before James Glancy brought Manor on level terms for a second time by the 27th minute when he hit over two successive points.

Mohill finished the half with a flurry when tacking on three unanswered points, scored by Alan McLoughlin, Domhnaill Flynn and Beirne (46 metre free) to lead by 0-8 to 0-5 at the break.

Within 20 seconds of the restart, James Glancy reduced the deficit with an early second half point. But Mohill responded with two points on the trot over the next three minutes from Daniel Beck and Beirne (45 metre free).

Mohill had a let off when a 36th minute Gerry Hickey shot came back off the crossbar, Conor Dolan following up with a point a minute later to keep his side in the hunt.

Keith Beirne stretched Mohill’s advantage to four points when he put over a 40th minute free. Glencar/Manor sub Niall Brady replied a minute later with a point from play .

Shortly afterwards Manor’s Gerry Hickey received a yellow card for a foul on Keith Keegan and within a minute Ronan Gallagher was a Mohill yellow card recipient.

A point from Manor sub Ronan Flynn reduced Mohill’s lead to two points but the score that changed the course of the game came some six minutes later when Alan McLoughlin hammered to the net following a move that commenced in the Mohill half.

A 55th minute James Glancy goal chance rebounded off the bottom of the upright while Ronan Flynn and Conor Dolan (free) hit over a point apiece for the north Leitrim side in the next two minutes to close the gap.