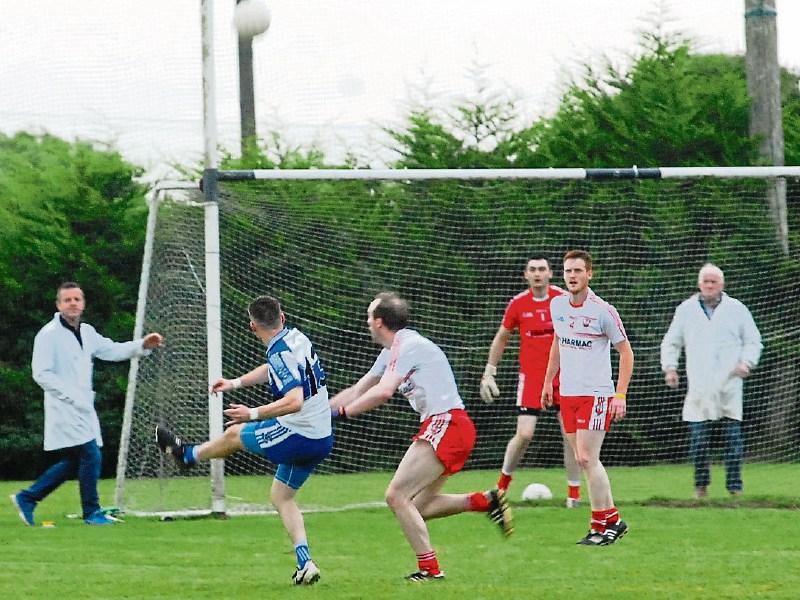 St Mary's and Dromahair went into last Saturday evening's encounter knowing that a win for either side would guarantee the winners a place in the last eight of the Senior Championship.

While it was St Mary's Kiltoghert who ultimately emerged victorious, the standard of football produced by both sides was some way below what will be required to be considered, at this moment, serious challengers for the Championship crown.

The ten point winning margin is slightly misleading as there was just three points separating the sides with 15 minutes remaining when Dromahair's Declan Fowley was given his marching orders after collecting his second yellow card.

Dromahair would have hoped to regroup and withstand the inevitable onslaught from St Mary's given their numerical advantage. However, St Mary's were much stronger in the closing stages and made up for some poor misses earlier in the contest to comfortably see out the game.

While the closing stages may have been one-sided, the game began in a cagey manner with both sides showing plenty of nerves and the fear of making mistakes evident among both sets of players.

Robbie Lowe opened the scoring for St Mary's in the opening minute before Robbie Cunningham replied for Dromahair with a pointed free but even at this early stage both sides were guilty of poor wides and wayward passes.

St Mary's retook the lead when Daire Farrell pointed and moments later they should have been further ahead when Alan Doherty was presented with a sight of goal but he was denied by a combination of Dromahair goalkeeper Michael O'Hara and the post when a goal looked inevitable.

From the resulting 45, the ball broke to Ray Mulvey who somehow managed to send his pointed effort wide from in front of the posts.

Dromahair got back on level terms when Robbie Cunningham struck for his second point but moments later they had another let-off when Alan Doherty again was denied by a last ditch block when a goal looked a certainty.

With 10 minutes of the half remaining St Mary's opened up a gap on the scoreboard for the first with three points in quick succession coming courtesy of Alan Doherty (free), Michael Corrigan and Ray Mulvey.

Dromahair reduced the deficit to just two points when Robbie Cunningham pointed from a free after a foul on Gary Fowley but that was immediately cancelled out by another Alan Doherty point.

Robbie Cunningham was leading a one man charge for Dromahair and he reduced the deficit to two points once more with a wonderfully floated shot off his left boot but it was St Mary's who completed the first half scoring with Ray Mulvey converting a free to give his side a 0-7 to 0-4 lead at the break.

That lead was wiped out within a minute of the restart when Gerard Kelly's seemingly harmless shot escaped the clutches of Conor Glancy and bounced across the goal line to give Dromahair renewed hope.

Three St Mary's points from Ray Mulvey (two, one free) and Alan Doherty (free) helped edge St Mary's back in front and the game seemed to be delicately poised until Dromahair's Declan Fowley was sent off after receiving a second yellow card with 15 minutes remaining.

That red card seemed to knock the fight out of Dromahair as St Mary's went on to boss the remainder of the game with the front duo of Alan Doherty and Ray Mulvey continuing to cause all manner of problems for the Dromahair defence.

Robbie Cunningham hit back with a pointed free for Dromahair but St Mary's stranglehold on the game was getting stronger as the game developed and they quickly hit back with three unanswered points from Michael Corrigan, David Tiernan and Ruaidhri McLoughlin to open up a seven point lead

Paddy McGowan replied with a booming effort from 45 metres out but that proved to be Dromahair's final score of the game.

At the other end St Mary's were not yet finished and they added to their tally with further points from Mulvey (three, one free) and Corrigan.

St Mary's now advance to the quarter-final while Dromahair face a tough play-off against Gortletteragh next Saturday to decide the final quarter-final spot.