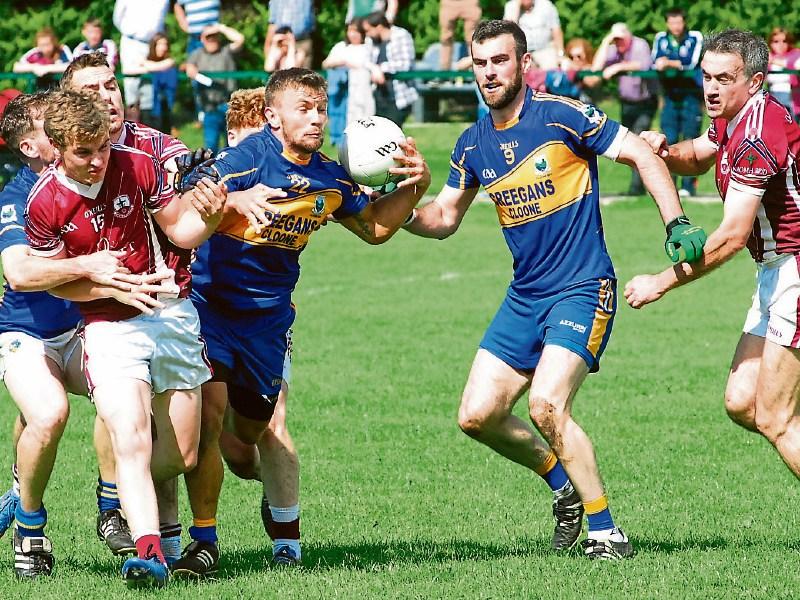 Having made a slow start to the Fox's Monumentals Intermediate Championship, Drumkeerin booked their quarter-final spot with a convincing victory over Cloone on Sunday afternoon last in Kiltubrid.

Having been outplayed in the opening half, Cloone regrouped in the second half with Gavin Reynolds, Eoin Keegan and the evergreen Michael Lohan brining them back into contention before Drumkeerin regained control in the closing stages to claim a deserved victory.

After suffering a heavy defeat at the hands of Ballinamore in their first outing, Drumkeerin have done well to regroup and secure second spot in the group with wins over Carrigallen and Sunday's triumph over Cloone.

With most observers expecting Ballinamore to claim the Intermediate Championship crown, there is little pressure on the chasing group. Following Sunday's win, Drumkeerin can consider themselves very much in that chasing group but they will be equally aware that there remains room for much improvement if they are to be considered contenders for the Intermediate crown.

Drumkeerin were the quickest out of the blocks and raced into a three point lead with Cathal McCauley to the fore for Drumkeerin, scoring those opening scores, two of which came from frees.

After their slow start Cloone came more to the fore but were let down by wayward shooting as five successive attacks yielded nothing more than five wides.

After 14 minutes of action without a score Drumkeerin got back in the groove with an Eddie McTiernan point after a fine move with plenty of incisive passing involving Aidan Doyle and Colm Clarke.

Further points in quick succession from Clarke, McCauley and Jamie Langan helped Drumkeerin open up a commanding seven point lead and the lead was increased when McCauley converted a free.

After 29 minutes of frustration Cloone opened their account courtesy of a fine effort from Mark Creegan and moments later they scored their second point when Gavin Reynolds converted a free to leave the score 0-8 to 0-2 at the interval.

Within a minute of the restart Drumkeerin re-established their seven point lead with Daragh Flynn on target although that was soon cancelled out by a Gavin Reynolds free.

Ten minutes into the second half Drumkeerin's James Gallagher bombed forward from midfield before finding Eddie McTiernan who pointed to put the north Leitrim side seven to the good once more.

Cloone refused to throw in the towel and over an 11 minute period scored five points while Drumkeerin managed just one. All of those Cloone points came from Gavin Reynolds frees as they refused to lie down without a fight although the ease with which Jason Beirne scored at the other end showed Cloone's vulnerability.

With eight minutes remaining and three points between the sides, there was a growing belief emanating from the Cloone dugout that what had previously seemed impossible was now within their grasp.

However, just as the Cloone hopes were lifted, they were dashed just as quickly. Brian Mulvey did brilliantly to beat two players before aiming for the Drumkeerin goal but his attempt flew harmlessly wide.

Drumkeerin took heed of that warning and finished strongly. A McCauley pointed free was followed by the game's only goal with James Gallagher finding the top corner of the Cloone goal after a pass from Daragh Flynn.

There was to be time for two more points with Cathal McCauley and Gavin Reynolds converting frees for their respective sides meaning Drumkeerin advance to the last eight after a seven point win.

Cloone now face into a relegation playoff against Glenfarne/Kiltyclogher and St. Mary's with either Carrigallen or Eslin to join them.