Carrigallen too lively for Eslin 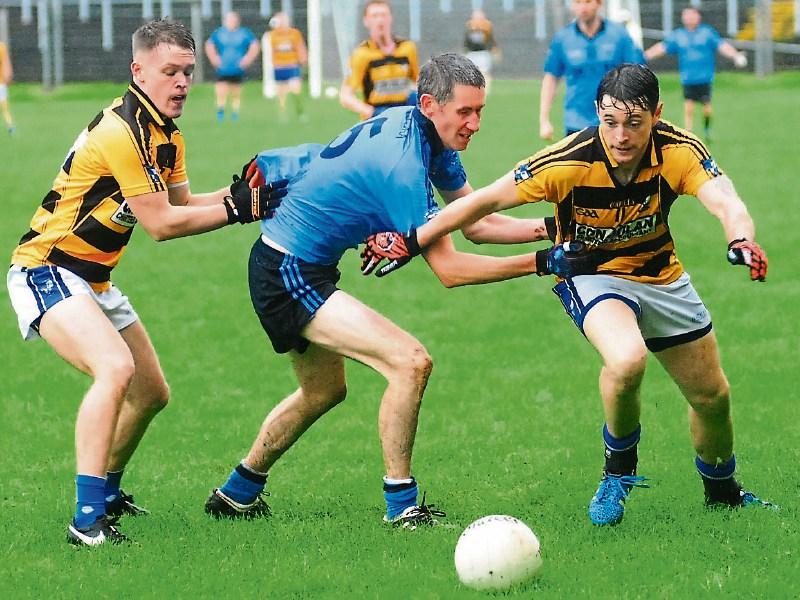 A livelier Carrigallen, who Eslin could not match on the day, claimed a decisive victory at the end in Saturday’s Intermediate Championship playoff in Páirc Sean Mac Diarmada.

Carrigallen took an early lead when Gerard Percival shot over a point just 40 seconds but Eslin responded within a minute with a Tomas Beirne goal that put his side into the lead for the first and only time in the contest.

The Eslin advantage was short lived as Carrigallen struck for a fourth minute goal after Gerard Percival put Benny O’Rourke through to ram his effort past keeper Enda Turbitt.

O’Rourke edged Carrigallen further ahead two minutes later with a point from play. Jamie Stenson found the range from a 10th minute 40 metre free to reduce Carrigallen’s lead to the minimum.

Over the next two minutes, Carrigallen’s Tiernan O’Rourke and Eslin’s Jamie Stenson traded points from play and a free. The Carrigallen men put more daylight between themselves and Eslin by the 15th minute thanks to Gerard Percival and Gary Reilly who each popped over a point.

Four minutes later, Barry McLoughlin raised an Eslin white flag from play. However Carrigallen pulled further ahead in the first half’s last ten minutes with a point from a Benny O’Rourke free (after Tiernan O’Rourke was fouled) and an Eamon Dolan point from play.

At the break Carrigallen led by 1-7 to 1-3 and after the restart, they stretched that advantage further with a 32nd minute Ciarán Reilly point. Eslin opened their second half account three minutes later when Tomas Beirne shot over from close range after being put through from a quickly taken Stenson free.

Carrigallen stretched their lead to five when Gerard Percival whipped over a 37th minute 40metre free. A foul two minutes later by Paul Kilcrann on Percival, which resulted in a yellow card, was punished when Benny O’Rourke put over the free.

When Gerard Percival put over a 40th minute point from play, he stretched Carrigallen’s advantage to seven points and put the game further out of the reach of the Eslin who were struggling to match their opponents.

When Eslin badly needed a goal to get back into the game the gods were not smiling on them as Barry McLoughlin drove a goal chance inches wide. Eslin rallied over the next eight minutes and managed to reduced the deficit to four points by the 53rd minute. Tomas Beirne, who had moved to midfield shot a spectacular point from the 45 metre line.

Shortly afterwards, Carrigallen keeper Darren Kenny was penalised for picking the ball off the ground outside the ‘square’ and Jamie Stenson converted the 13 metre free.

Jamie Stenson again found the target from a 30 metre 53rd minute free after he was fouled. Carrigallen, who hadn’t scored for 16 minutes, answered with a Percival 56th minute free conversion after Benny O’Rourke was fouled.

A minute later Jamie Stenson replied with a point from an Eslin free. Points were traded at opposite ends before the finish with Gerard Percival putting over a 30 metre Carrigallen free following a foul on Benny O’Rourke while Barry McLoughlin answered with an Eslin point from play, to close the scoring in the game.

Carrigallen, who saw Daniel Hackett receive a black card, held out to claim a quarter-final spot against Mohill while Eslin will face St. Mary’s in a relegation semi-final.