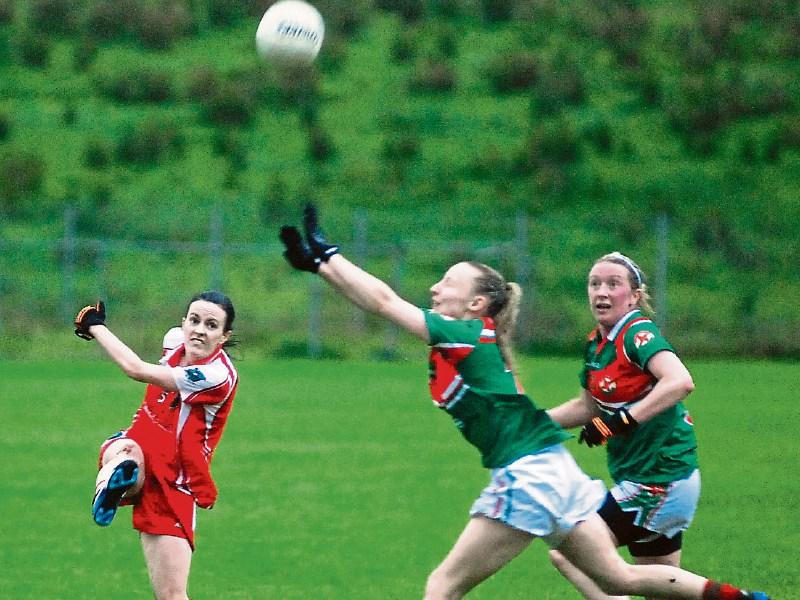 While they were hanging on in the second half and looked to be in real danger until Siobhan Kelly scored their decisive third goal, Kiltubrid were excellent in defence as they frustrated Dromahair who dominated in turns of possession but struggled to turn that into scores.

Aine Tighe was once again to the fore for her side but not just in front of the Dromahair goals. Operating in midfield she worked tirelessly for her side and was as busy in defence as she was up front. However, this was far a one woman show as Kiltubrid had standout performers all over the pitch.

Corner-back Siobhan Kelly was excellent in defence as were Orla McWeeney & Sinead Tighe while Emma Guckian, Clodagh McGrail and Michelle Guckian all made telling contributions for Kiltubrid.

The torrential rain did neither side any favours as the simplest tasks became much more difficult. Catching the greasy ball required complete concentration, while bouncing the ball was done with the risk of not being able to regain control.

Dromahair will look back on the first half with plenty of regret and frustration as a number of wides meant they were unable to turn their possession into points.

Erin Farrell added another point to Dromahair's tally but they were finding it very difficult to get through a very well organised Kiltubrid defence.

Having shown plenty of patience as they defended resolutely, Kiltubrid got back in the scoring groove when Emma Guckian pointed with Dromahair able to reply with nothing more than three wides.

Kiltubrid came more to the fore as an attacking force in the closing ten minutes of the half with an Emma Guckian point levelling matters before she turned provider for Aine Tighe who scored the game's opening goal.

Aine Tighe added a point with six minutes of the half remaining before Roisin Fowley completed the first half scoring with a converted free meaning Kiltubrid held a four point advantage, 1-5 to 0-4.

With the weather improving considerably after the break Dromahair started the second half with renewed intensity and three points from Roisin Fowley (one free) within three minutes of the restart brought them right back in to contention.

Over the next 12 minutes the sides both kicked two points each with two points for Erin Farrell, who was excellent in a sweeping role that also allowed her the freedom to roam forward, matched by two Michelle Guckian frees.

With 13 minutes left on the clock Michelle Guckian pointed after a wonderful interception seconds earlier by Claire Kelly and a minute later Tighe struck for her second goal to put her side in control as they now led by five points.

There was no sign of Dromahair throwing in the towel and they were unlucky not to immediately reply with a goal of their own but Anna Conlan's shot was brilliantly deflected wide by Aoife McWeeney.

The wait for a goal didn't last long for Dromahair as Roisin Fowley found the net with eight minutes to go after some brilliant play from Mary Farrell.

Further points from Erin Farrell and Sinead Fowley brought Dromahair back on level terms and with just four minutes remaining it seemed Dromahair were on the verge of completing a wonderful comeback but Kiltubrid were still a very dangerous force.

With just a minute left Aine Tighe was surrounded by three Dromahair defenders as she looked for an opportunity to get a shot at goal. Showing great awareness and realising she wouldn't be able to threaten the Dromahair goal she spotted the unmarked Siobhan Kelly and picked her out and the corner-forward dispatched her shot to the goal to clinch Kiltubrid's spot in the final.