Revenge is sweet for St. Caillin's as McLoughlins lead the way 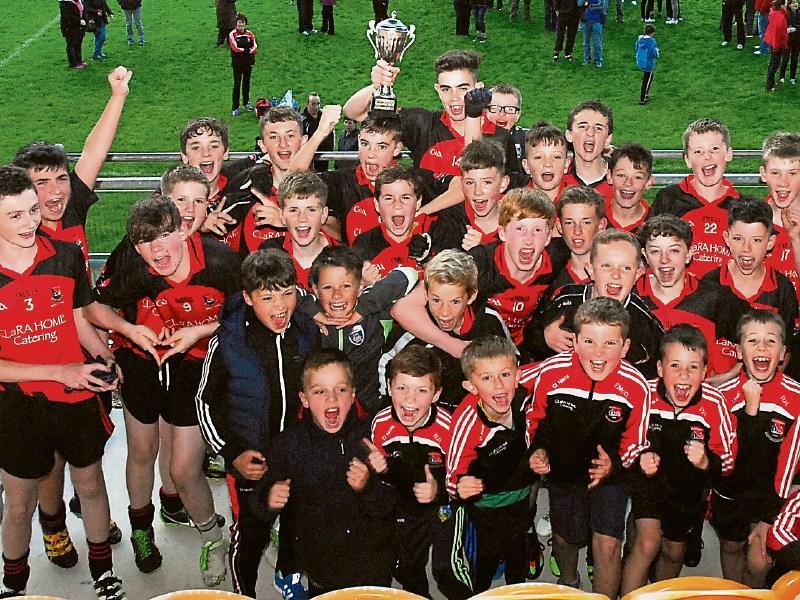 Revenge was certainly sweet for Fenagh St. Caillin's as they saw off deadly rivals St. Mary's Kiltoghert to lift the U14 Championship 15-a-side crown.

Driven on by the excellent Eoin McLoughlin in the middle of the park, the superb freetaking of Fergal McLoughlin and a disciplined defensive display, they held off the Carrick men in Pairc Sean Mac Diarmada last Friday to gain revenge for their League Final defeat.

In that Final, Fenagh were undone by the movement of St. Mary's forwards but they learned their lesson well, restricting the fast moving Carrick forwards and denying them the goals that decided the League Final.

St. Mary's put up a valiant effort and looked at one stage as if they might get back on level terms in the closing minutes. But Fenagh had too much resilience and held out for a thoroughly deserved win despite some bad wides.

St. Mary’s opened the scoring with an Ethan Bohan free after a foul on Kyle McCrann but St. Caillin’s were not long in emphasising their superiority when Eoin McLoughlin cut through the middle, played a one-two and scored within seconds.

A Fenagh free was batted out but a foul on Caolan McDermott resulted in Fergal McLoughlin tapping over a free. From the kickout, two quick passes found Caolan McDermott and a third point arrived for Fenagh.

But just as St. Caillin’s were in control, St. Mary’s struck for their first goal when Ashley Mazia went on a 50 yard run and delivered a long ball towards the Fenagh goal. The ball seemed as if it would evade Ethan Bohan but the diminutive forward somehow managed to whip a shot from the right side of the goal to the Fenagh net.

Fergal McLoughlin replied with a free but St. Mary’s were flying and a great pass from Gavin Reynolds found Cian Singleton who sidestepped a defender to bury a shot in the Fenagh net.

Fenagh keeper Paul Flynn punched clear a high ball with Ethan Bohan firing over a free on 16 minutes but in contrast to the League Final when goals undid Fenagh, they responded positively with two frees from Fergal McLoughlin.

Fenagh also had a goal disallowed for a square ball but poor kickouts were really killing St. Mary’s, Cormac Scollan and Caolan McDermott both pointing from poor kickouts while McDermott added another after a strong run from Eoin McLoughlin.

Another Fergal McLoughlin free left a dominant Fenagh with a 0-10 to 2-2 lead at halftime but it was St. Mary’s who started the second half best. Unfortunately for them, they could only manage a point from a Conor Hackett free on eight minutes after a lot of pressure.

Fenagh too had a lot of bad wides but they finally seemed to have found their range when Fergal and Eoin McLoughlin both point and Cormac Scollan pointed to leave them four points clear with 13 minutes left. Their cause also seemed good when Paul Flynn made a great save to deny Mark Lowe a shot while the follow up was blocked.

St. Mary’s refused to give up and Cian Singleton came close to a penalty when he was taken down after a 40 yard run, Ethan Bohan putting over the free on the edge of the large square. Bohan then hooked over a point after a high ball broke off a defender.

That left two points in it with seven minutes to go but sub Sean Brennan hit the post with a good effort before another Bohan free left St. Mary’s looking for an equaliser.

With both teams fighting hard for a score, they both had bad wides but a great move down the field in added time saw Callum Canning secure the victory with a great point.