Success breeds success as Aine & Adrian enjoy back to back victories 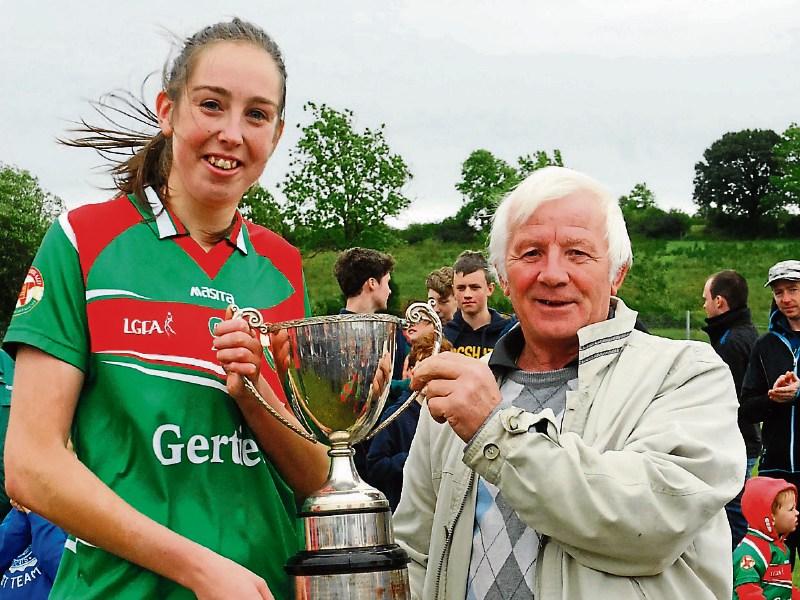 Kiltubrid captain and player of the match Aine Tighe was quick to deflect attention from her own performance when speaking after the game as she paid tribute to her team-mates and acknowledged the role St Joseph's played in an exciting final.

“Conditions were very difficult playing with and against the wind, it was that strong but our girls worked as hard against the wind as they did with it. They’re a huge bunch of girls and it was a great game.

“St Joseph’s put it up to us from the start all the way through and it’s just a relief to come out on the right side of it,” said the Player of the Match.

Kiltubrid were clinical upfront but, as in their semi-final win over Dromahair, the role played by their defence was crucial as Aine pointed out.

“Our defence has been outstanding all year and that’s why we pride ourselves on. We build on it from the back. We keep the score down and then we know we have the forward line that is dangerous enough to hopefully get the scores when they matter and that came through today and I’m delighted.

Kiltubrid were dealt a blow on the stroke of half-time when Clare Kelly but they responded well to that setback - “The yellow card came at not too bad a time. We went in at half-time and got a chance to regroup and we set ourselves up. We knew it was going to be a huge battle in the first 10 minutes against the wind. Again we just stuck to what we have been doing all year.

Before claiming their first ever title last year, Kiltubrid had come close on several occasions with Aine believing their is a key ingredient for their recent successes.

“We’ve had fantastic teams for the last five or six years, maybe even longer than that. I think the last two years the only difference has been the confidence and the belief. The belief the two boys, Brian and Adrian, have instilled in us has been huge and I think that has been the difference.

“We know we have the ability and the confidence and the belief and to be able to put in a performance and get the result is brilliant.”

Adrian McKeon was understandably a pleased man as he reflected on his side's victory shortly after the presentation.

“It was certainly hard earned, conditions were really difficult for both teams. Credit to St Joseph’s as well as ourselves, it was a fabulous game of football. When the wind is so strong and blowing in one direction you have to push on until half-time. We’d an eight point cushion, I didn’t really think that was enough.”

Adrian agreed his side's second half penalty came at a great time - “I think we got our penalty just at the right time, St Joseph’s were really putting the pressure on and it gave us a lifeline and we built on that.

He also pointed to the sideline to the role of his subs saying, “We were able to bring in two players like Niamh Tighe & Ciara McWeeney who are county standard players during the sin-bin period. If you area able to bring them off the bench for 20 or 25 minutes, that’s the difference.

Commenting on what the win means to Kiltubrid Adrian said his players have become role models for the younger girls in the community.