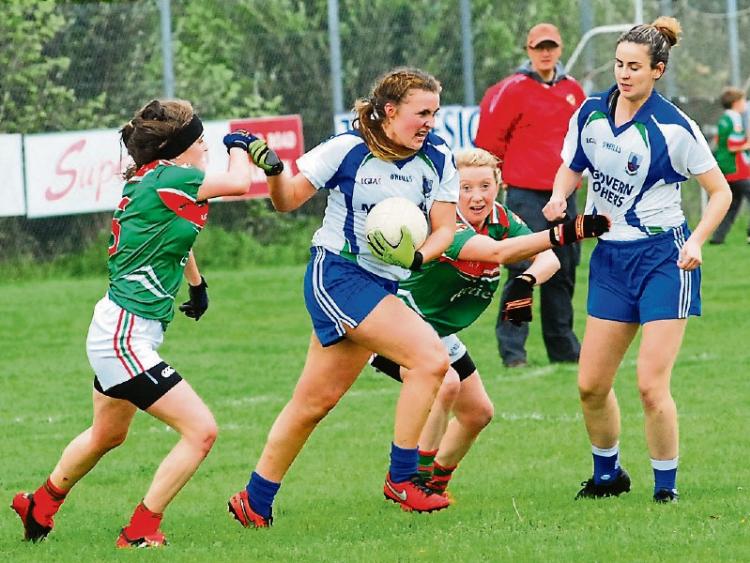 A year after claiming the Cox's Steakhouse Leitrim Ladies Senior Championship title for the first time, Kiltubrid successfully defended their title on Sunday last when they proved too good for St Joseph's.

The windy conditions in Leitrim Village made for difficult conditions but not even the elements could stand in the way of Kiltubrid from retaining their title.

Team captain Aine Tighe was pivotal for Kiltubrid throughout as she led by example to help steer her side to victory. Fellow county stars Michelle and Emma Guckian were also central to Kiltubrid's success but the importance of a well drilled defence was also perfectly illustrated as St Joseph's were left largely frustrated as they tried to find a breakthrough.

While the scorers generally take the spotlight, this was a team performance built on hard work throughout the pitch. Kiltubrid were well organised all over the pitch knowing that if they were able to keep it tight at the back, they had the quality up front to ensure they retained their title and that threat was apparent straight from the start.

As is often the case, Aine Tighe won the ball from the throw-in at the start of the game and embarked on a run towards the St Joseph's goal. Tighe could have taken a point herself but instead she released Emma Guckian who did well to find herself free of the attention of the St Joseph's defence. However, St Joseph's goalkeeper Kiera Masterson was alert to the danger and made a crucial save to avert the danger.

The opening score arrived in the third minute when Emma Guckian pointed and moments later the lead was doubled when Michelle Guckian converted a free.

The Kiltubrid lead was further extended in the seventh minute when Emma Guckian got the better of two defenders before slotting the ball between the uprights.

It was to get even better for the Kiltubrid supporters just a minute later when their side struck for the game's opening goal. The ball was won in front of her own defence by Kiltubrid's sweeper Lisa McWeeney and the ball was then worked up the pitch towards Aine Tighe. It looked as though she hadn't connected with the ball as well as she would have liked but the ball bounced off the turf, deceiving the St Joseph's defence and goalkeeper and into the net.

After a tough start, St Joseph's began the task of getting themselves back in contention and opened their account in the ninth minute with a Carmel McGovern point but moments later that was cancelled out by arguably the score of the game.

Siobhan Kelly's pass found Michelle Guckian and from a huge distance, she judged the wind to perfection as the ball flew over the uprights.

A Bronagh O'Rourke free brought St Joseph's their second point but even though only a quarter of the game had elapsed, the Aughavas/Carrigallen club already looked to be in trouble.

Kiltubrid increased their lead with points from Aine Tighe and three further scores from Michelle Guckian. After a point from play, she then scored from a sideline ball, added another from play and scored her fifth point of the half when she converted a free after a foul on Aine Tighe.

Despite trailing by nine points, there was no sign of St Joseph's throwing in the towel. They were only too aware that if they could reduce the deficit they would have the wind at their backs in the second half. However, they were finding it difficult converting their opportunities into scores as four successive attacks saw four shots sail wide.

Five minutes into injury time, St Joseph's were given renewed hope when Kiltubrid's Clare Kelly was yellow carded for a foul on Michelle Heslin. The Kiltubrid defender, like many others on the pitch, had received warnings from referee Vinnie McMorrow and she ran out of warnings when she was sent to the line for 10 minutes and the resulting free was converted by Bronagh O'Rourke meaning Kiltubrid led 1-8 to 0-3 at the break.

As the second half got underway, St Joseph's looked intent on reducing the deficit. Both Aine Heslin and Carmel McGovern had brief sights of goal but both were denied by fine blocks.

A Bronagh O'Rourke free and a Carmel McGovern point reduced the deficit before Kiltubrid replied with a Michelle Guckian pointed free. Kiltubrid would have been relatively happy with how they withstood the challenge of St Joseph's during the sin-bin period as there was only one more score while they had a numerical disadvantage with Michelle Heslin on target.

Midway through the half, Kiltubrid were awarded a penalty following a goalmouth scramble and there was no surprise when Aine Tighe calmly slotted the ball to the bottom corner to give Kiltubrid a commanding nine point lead with 16 minutes to be played.

St Joseph's gave their all in the closing stages but they knew a goal was crucial to their hopes of being crowned champions. Kiltubrid, on the other hand, knew if they protected their goal and added a few points of their own they should be safe.

The sides exchanged three points each with Michelle Guckian (two frees) and Aine Redican on target for Kiltubrid while Aine Heslin, Michelle Heslin and Bronagh O'Rourke (free) pointed for St Joseph's but with time running out it was becoming ever more apparent that Kiltubrid were on course to retain their title.

Showing great perseverance St Joseph's kept battling and were finally rewarded with a goal of their own when a booming delivery from Aine Heslin bounced in the Kiltubrid goalmouth and caused confusion among the defence. The quickest to react was Bronagh O'Rourke who slotted the ball to the goal.

That was followed by a Michelle Heslin point after good work from O'Rourke and Clare Owens but it was not enough to deny Kiltubrid who were deserving winners although they were made to work right until the end for their crown.