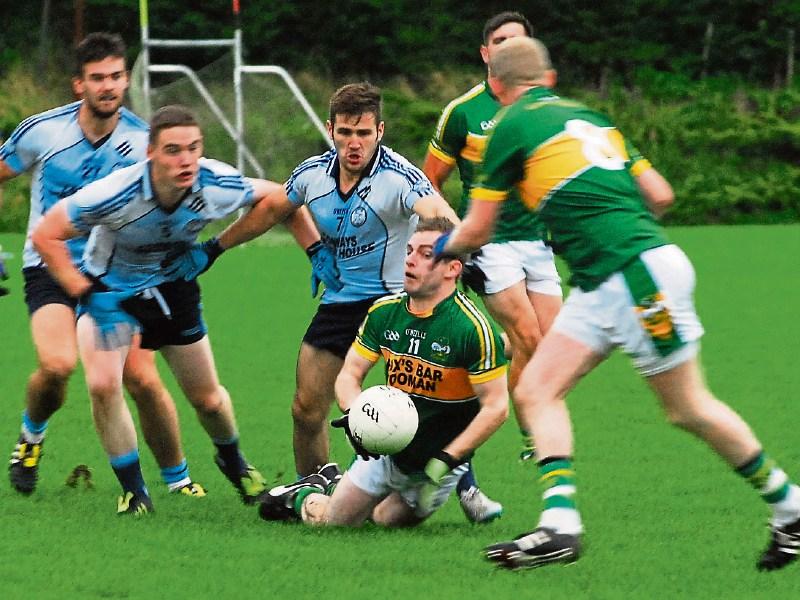 Momentum in sport is vital. Allen Gaels had it early on and looked unbeatable but it eventually turned in Gortletteragh's favour in a thrilling finale that had the crowd in Ballinamore on the edge of their seats.

Gortletteragh looked for a long time in the second half as if they were going to throw away victory with a succession of bad wides but three points in the last six minutes saw them book a place in the quarter-finals.

Allen Gaels were stunned to say the least - they looked a different class early on with Nicholas Moore leading the way but they lost their way and were unable to fight their way back into the game as the momentum swung completely the other way.

The Gaels made a valiant effort to hold on but just as the finish came into sight, Gortletteragh struck for victory.

Allen Gaels got off to the perfect start when, just 20 seconds after the throw-in, Nicholas Moore’s incisive run set up Thomas Mulvey for a close range goal. Moore then added a free after a foul on James Flynn as the Drumshanbo men were flying.

Francie Flynn curled a wonderful shot over the bar on four minutes before Cathal McCrann started off an incredible day from placed balls by firing over in the sixth minute.

Both teams missed chances but Nicholas Moore punished a foul on himself by converting the free on ten minutes, Cathal McCrann doing the same a minute later. Conan Clarke batted a free out while Mulvey saw a fantastic block on a shot with the follow-up going wide.

Gortletteragh may have been coming more into the game but when they lost the ball, James Flynn punished with a good point. From that kickout, Flynn charged through and got the ball to Dylan McGowan who picked out the far right hand corner with a precise finish for a devastating goal.

That came after 18 minutes and it looked as if Allen Gaels would run away with it but two McCrann frees over the next five minutes, one moved in for dissent, and a Moore wide gave Gortletteragh a little hope.

Diarmuid McKiernan came up the field to fire over a fifty metre free with five minutes left in the half but incredibly, that was Allen Gaels’ last score of the game with McCrann immediately tapping over a free after a foul on Jack Heslin.

McKiernan made a great catch ahead from a huge Heslin shot but it was Gortletteragh pressing, and missing, before McCrann scored his sixth free of the half to leave Allen Gaels leading 2-4 to 0-7 at the break.

Gortletteragh, with the wind, started off brightly with Kevin McGrath seeing a low shot hit the base of the post with the keeper beaten before Heslin took a pass from Evan Ward to point two minutes in.

But the scores didn’t flow, the wides did as both sides missed chances, Gortletteragh admittedly the more guilty.

James Campbell fired over a monster point to leave just a point between the sides after ten minutes but incredibly, we went 17 minutes and seven missed chances from Gortletteragh before the next score.

Allen Gaels had chances too with Conan Clarke pulling off a match winning save to deny James Flynn eight minutes from time. Gortletteragh finally grabbed their chance when McCrann played a one-two from a free to fire over with less than three minutes left.

The accuracy didn’t improve, however, as McCrann hit a wide and Ciaran Egan saw a shot blocked after a great catch from sub Padraig McGarry. Crucially the ball went out for a fifty and as the game ticked into added time, McCrann thumped over a fifty to put Gortletteragh into the lead for the very first time.

Allen Gaels tried to work a free and when they won a free with two of the three added minutes elapsed, Diarmuid McKiernan had a huge task to fire the 50 yard effort over the bar into the wind, the effort falling short.

Gortletteragh had a minute to see out but instead of sitting pretty, they drove on and sub Barry Tiernan broke through a tackle before scoring a huge point from the corner to seal a famous win.