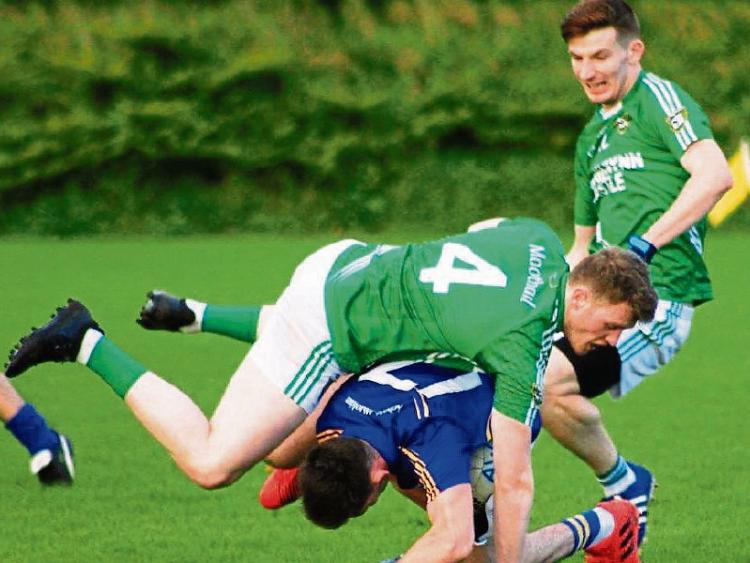 A fantastic and, at the same time, wasteful Aughawillan ended Mohill's reign as Leitrim Champions in a thrilling encounter last Saturday in Ballinamore.

Aughawillan turned in a fantastic first half display as they overcame the trauma of conceding a first minute goal to score eight unanswered points to sow the seeds of victory. Mohill launched a ferocious second half fightback but just when they drew level, Niall Beirne pounced for a point to give Aughawillan a famous and deserved victory.

Mohill got off to a brilliant start with a fantastic Padraig Tighe interception before a shuddering Alan McLoughlin tackle stopped an Aughawillan defender in his tracks, the ball sent into Ronan Kennedy drilling a great shot to the net inside 90 seconds.

Incredibly, that was the high point for Mohill - Aughawillan immediately hit back with a Ciaran Gilheany free while Keith Beirne saw a good shot hit the post. Aughawillan, however, were flying as Morgan Quinn gathered a quick free to point before Gilheany held off Danny Beck to float over a great point.

Aughawillan were also hitting some bad wides but Niall Beirne fired over a great effort on ten minutes to put his team in front and despite a few more misses at both ends, the Willies continued to force the pace with Gilheany converting a free midway through the half.

Mark Plunkett then showed great awareness as he cut in along the endline and curled a great shot over the bar from a very tight angle. Gilheany would add another free before Domhnaill Flynn lost the ball on the wing and Aughawillan pounced, quickly finding Morgan Quinn who scored a nice point on 21 minutes.

That was an unanswered eight points in 20 minutes as Aughawillan were in complete control. A shell shocked Mohill saw Domhnaill Flynn and Keith Beirne convert frees either side of a poor Gary Plunkett effort but Beirne & Kennedy missed three great chances to tie the scores between them.

And Aughawillan struck a huge blow before halftime with a lovely Gary Plunkett long range point before Aughawillan intercepted a terrible Mohill pass and Pearse Dolan finished off a great run with a point to leave Aughawillan 0-10 to 1-2 ahead at the break.

The second half would be a different affair as Mohill dominated and Aughawillan missed some great chances. Ronan Kennedy set the tone, missing a good chance of a goal after just 20 seconds before Keith Beirne put over a third minute point.

Aughawillan then lost the ball to Alan Armstrong who promptly set up Ronan Kennedy for a huge score from the wing. Aughawillan’s cause took a blow when Sean Fox was black carded but Gary Plunkett scored a typically outrageous effort from the corner on six minutes.

Mohill kept fighting and two Beirne points, one a great effort from play, the other after a soft enough free, left two points in it with 21 minutes to go. Aughawillan replied with a harsh enough Morgan Quinn free, awarded for a foot-block after a double dummy from Gary Plunkett, James Mitchell getting a yellow in the process but Aughawillan also missed three good opportunities.

Flynn converted a free before Padraig Tighe intercepted a low Mark Plunkett shot just ahead of Ciaran Gilheany but a botched clearance saw Morgan Quinn point to stretch the lead back to three points.

Shane Quinn won back a ball he shouldn’t to set up Flynn for a massive score from the wing and two minutes later, a foul on Fiachra McGuinness saw Flynn pop over a free to leave just a point in it.

With a little over two minutes left, Mohill drew level when Ciaran Gilheany was dispossessed, the ball transferred through Flynn and Beirne before Kennedy scored a thunderous point to tie the scores.

Aughawillan were not about to surrender and despite what looked to be a poor shot across the Mohill goal, Niall Beirne kept the ball in play and fisted the ball over the bar to put the Willies back in front.

With three minutes of added time, the tension was huge as Ciaran Gilheany saw a shot half-blocked while Keith Keegan burst through but a wild shot from close range never troubled the umpires.

The ball came out to Alan McLoughlin who launched an effort from a very tight angle at goal. McLoughlin was convinced he scored but after a moment’s hesitation, the umpires signalled a wide and Mohill’s title defence was over.