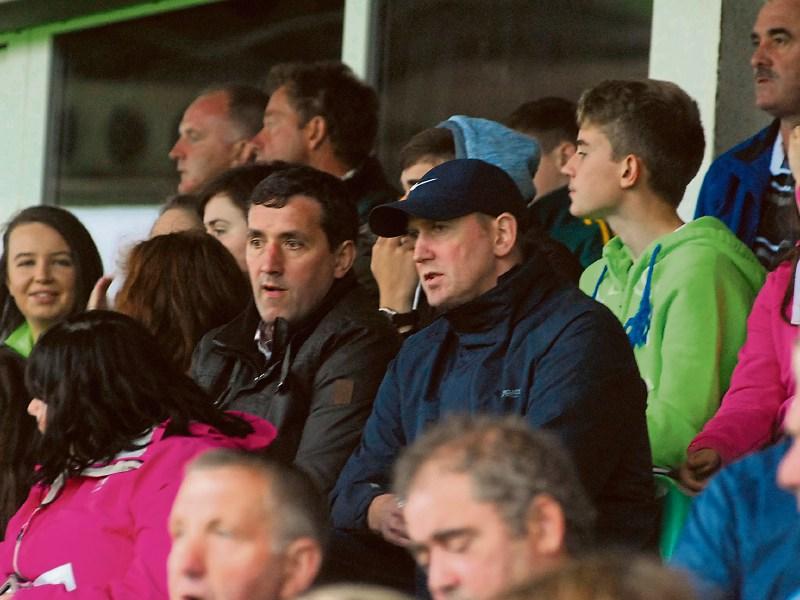 There are no promises of promotion from Division 4, no talk of a championship push but rather when Brendan Guckian discusses his new post as manager of the Leitrim Senior team, a quiet determination to restore pride in the wearing of the county jersey quickly becomes obvious.

Pride in the jersey is all too familiar to the Carrick-on-Shannon native who won Connacht Senior and U21 Championship medals in the early nineties and Brendan Guckian is determined to see the pride he had in the Green & Gold jersey replicated in the players of today.

“Our primary aim is to get the best players in Leitrim playing for Leitrim,” Brendan told the Observer, “I’ve watched a lot of club games in Leitrim already and there are a lot of guys out there that are quite capable of wearing a Leitrim jersey who haven’t been over the last couple of years so there are opportunities there for everybody to lay down a marker and represent their county with pride.”

And neither does Brendan go with the belief that there is a dearth of talent in the county - “I think that there are good enough footballers out there, our primary aim is to get the best available players playing for Leitrim and if we do that, our second aim is to get them playing as best as they possibly can.

“If we do that, we will get the results along the way. There are good young lads coming up the ranks and I think if guys gel together and pull together and get the pride and passion back in the jersey, I think we could do a lot of good things.

“That’s our primary aim, to get the best available players playing for Leitrim, to get them to play to their potential as individuals and as a team and you would imagine, if that happens, you would get results along the way.”

Yet the new manager is savvy enough not to promise the long sought after promotion from Division 4 in the Allianz League, even if it remains an ambition but it is an ambition tinged with realism.

“Ideally, you would be looking to get out of Division 4 but if you look at the League, we are away to Wicklow in the first game, then we have Wexford and then we are away to Westmeath and we have Limerick away so you have tough, tough challenges in the League.

“The aim is to deliver performances and I think supporters will hopefully buy into that, to see guys giving their all out on the pitch and to see guys walking tall with the pride of the Leitrim jersey on them.

As a Leitrim native, the pride at taking over the reins of the County Senior team and a dream job for the St. Mary’s Kiltoghert clubman - “Absolutely, I suppose when you are playing for your county throughout the years and you’ve trained under managers, it is something that you would always look at yourself .

“The fact that I’ve been involved in club management, it would always have been an ambition to manage your home county and I am just very honoured to get the opportunity to do it and do it to the best of my ability.”

His management team comes loaded with big names who could quite conceivably have been considered for the top job themselves but Brendan believes that will add to the strength of the new management structure.

“I think any manager, the first thing they want to do is align themselves with good people and I think that is what I have. I have to say I was pleasantly surprised, the lads jumped on board straight away. We met six or seven times since the County Board process started and everything has been very positive, everyone is enthusiastic and everyone is looking forward to the job ahead.

“Michael (Moyles) is probably one of the top coaches in the country, I would rate him as being that way. He is very up to date with training. Seamus Quinn is an All-Star, would be very well up to date with club players and he has got great experience and will command great respect in the dressing room I think.”

The addition of Leitrim’s 1994 and double All-Ireland winning manager John O’Mahony has attracted a lot of headlines and Brendan sees the Mayo man’s involvement in glowing terms - “John’s reputation speaks for itself and I’ve no doubt that the players feed off that. He is going to be very much involved with the players and I would hope that his wealth of experience would rub off on them. He is very enthusiastic about coming back to Leitrim which is great.”

The most immediate aim is to get a panel yet and Brendan reveals he will be talking to members of the current squad in the coming days after talking to former county players in the past two weeks as well as bringing in young players.

“There is huge potential coming up through the ranks and there has been a lot of hard work done by Development squads so hopefully we will see the fruition of that hard work. Hopefully, that will energise the panel to see youngsters coming in and trying to claim a place in it. I think it is all good.

“I’ve spoken probably more to players who haven’t been involved over the last couple of years, just to get their feedback and I’m glad to say that there feedback has been positive. Over the next week or two, I’ll be touching base with guys who were on last year’s panel and maybe a couple of the younger guys, hopefully, they will be able to come in.

”We’d also be looking at maybe the option of guys who are based in Dublin that might have eligibility to play with Leitrim as well so we are looking at one or two of those as well. Over the next couple of weeks, we will hopefully tie down the panel.”

As for a style of play, Brendan and his management team will look at that once the panel has been formalised - “It is too early yet to think about that, the first thing is to get a panel organised and to see what our strengths are and to basically develop a gameplan to our strengths. Whatever that may be, I cannot tell you, it is about getting a panel together.

“We will hopefully be getting a panel together over the next couple of weeks and we will be setting up a programme then and take it from there.”