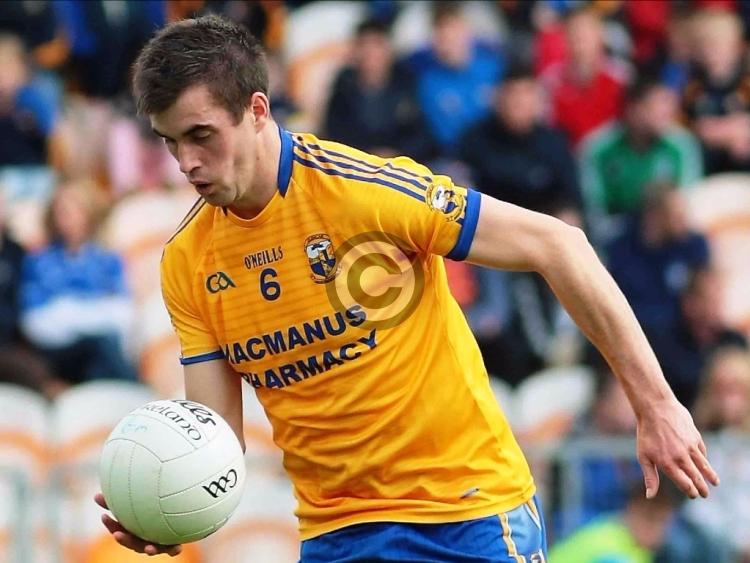 Glencar/Manorhamilton's Paddy Maguire can look forward to another County Final after victory over St. Mary's

Glencar/Manorhamilton booked their place in the 2016 Connacht Gold Senior Championship Final on Saturday evening in Pairc Sean Mac Diarmada when they finished strongly to see off St. Mary’s Kiltoghert in the semi-final.

On an emotional day for the Glencar/Manorhamilton club, the match was preceded by a tribute and a moment’s silence for the late Mark Rooney/

In a game that was far from a classic, the sides were locked in a dour struggle but the game turned midway through the second half when James Glancy scored a fine point to put Manor ahead before keeper Gary Hickey made a wonderful save to stop a deflected Daire Farrell shot.

With the north Leitrim men, defeated finalists in 2015, able to bring on reinforcements of the calibre of Adrian Croal, Darren Sweeney and Ronan Flynn, Glencar/Manor’s strength in depth told its tale in the final ten minutes.

The first half was a dour, mistake ridden affair with both teams missing good chances. Glencar/Manor dominated early to open a 0-3 to 0-1 lead but two Alan Doherty frees put Mary’s in front before a trademarked James Glancy effort left the sides level at the halftime interval, 0-4 apiece.

The third quarter was equally tense and tight with two Ray Mulvey points edging his shot in front with 13 minutes gone but the Carrick men were unable to live with Glencar/Manorhamilton’s powerful finish.

Glencar/Manorhamilton’s players and manager Aidan Rooney will be interested spectators tomorrow when Aughawillan face Gortletteragh in the second semi-final.