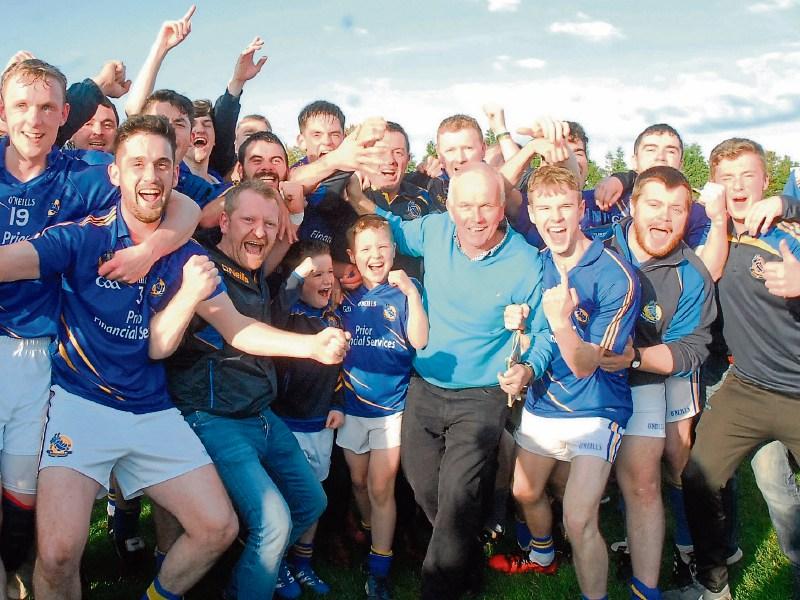 Aughawillan players and supporters celebrate after winning the Leitrim Senior Final. They will be hoping to celebrate again on Sunday. Photo by Willie Donnellan

Tommy McCormack might describe himself as a realist but there is no doubting that Aughawillan’s manager is expecting a big performance next Sunday from his charges against St. Brigid’s.

Pairc Sean Mac Diarmada hosts the meeting of the Leitrim champions and former All-Ireland Club winners St. Brigid’s (2pm throw-in) and many are expecting a comfortable win for the Kiltoom men, a Roscommon paper predicting a six point win for Frankie Dolan’s team.

But beneath the calm exterior, there lies the heart of a competitor and Tommy McCormack is sure his team will test the favourites next Sunday - “We’re looking forward to it. You look at Connacht in particular, you have Corofin in Galway, you have Mitchells in Mayo and you have St. Brigid’s in Roscommon and they are all potential All-Ireland winners.

“We are looking forward to this game because, realistically, this is where you want to be, to test yourself against the very, very best and make comparisons, see where we are, where we want to be and where we have to be and that is our ambition at the present time.

“To come up against any of those guys is formidable task but we have worked hard since the County Final, we haven’t played a lot of matches but we have worked exceptionally hard and hopefully, we will give a good account of ourselves.”

If that sounds like manager speak for a cop-out, don't be fooled for a second as Tommy and Aughawillan are all too aware that they are representing the county. And Tommy even cites the example of neighbours Sean O'Heslin's as an inspiration.

“Absolutely, the guys on the doorstep, they did brilliantly to win that game and get into a Connacht Final. We are only one game from a Connacht Final and that is the thing about it. In pursuit of that, you have to give it absolutely everything on the day, that is what we need to get there.”

And Aughawillan are going to embrace their underdogs status by paying it no heed whatsoever - “Sometimes the word underdogs is brandished around but it is what you bring to the game, irrespective of whether you are favourites.

“If you don’t take what is necessary to the game, you can be caught and our guys will be going there, irrespective of what tag we carry, to give 100%, we have the work done as best we can.

“We are going into that game, not alone are we representing Aughawillan, we are representing the people of Leitrim and when you got up against Roscommon on any particular day, we expect the lads will give of their best and we are going to give a good account of ourselves on Sunday.”

Aughawillan will embrace the challenge but Tommy agrees St. Brigid's represent a very different challenge - “This is a very different game, you set out your stall different. You can be brushed aside by some of these quality teams very quickly. Our target for Sunday is to get in there early, stay there, show resilience and reflect on how we are at halftime and take it from there.”

The differences between the clubs don't end there as Aughawillan, with a small population base are dwarfed by St. Brigid's - “Number wise we wouldn’t be great but the boys give 110%, there is no question about that. We were watching the game against Pearses and they had as many guys, great calibre of guys, kicking the ball around at halftime.

“They have the numbers and that means an awful lot in training sessions when you can play an in-house game every week. In Aughawillan, we don’t the luxury of those numbers.”

As for the dreaded prediction, Tommy may be realistic but he is also ambitious as he says “Since the championship started, every game has been taken on its own merits, we are playing St. Brigid’s in another championship game, another team to beat. We’re going after it as best we can.

“You have to be a realist, we will be giving 110% in that game and if that is good enough on the day, we will win that match. But to say you are going out to win matches, we are taking it as just another game.”

St. Brigid's are cautious as they have lost stars Ian Kilbride & Garvan Dolan and selector Ger Dowd is preaching caution - “We're expecting them to be strong and very committed. Both teams are only 60 minutes from a Connacht Final, its an enticing carrot. There's huge room for improvement. If we want to win on Sunday, our accuracy has to improve.”

Aughawillan know they are up against a quality team but Ballinamore's example will no doubt inspire. But St. Brigid's are a very different proposition and the fact the game is in Pairc Sean and allied with missing players means they will be on their guard for an ambush.

Aughawillan have started well in all their big games this year and they will look for the same next Sunday. Playing at home is an advantage but a good start is vital and the hope would be that if they can keep the game close, even a team as seasoned and accomplished as Brigid's might fall to the legendary battling spirit of the Aughawillan men.

You have to give the nod to St. Brigid's but if they can keep it close, Aughawillan can create history again.