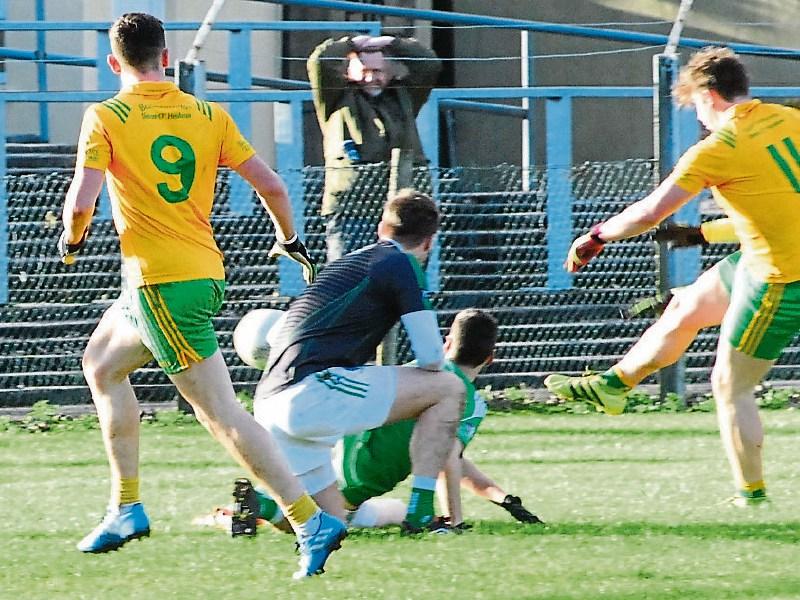 A helpless St. Molaise keeper and defender can only watch as Peter Reynolds fires the ball to the net last Sunday for the game's only goal. Photo by Willie Donnellan

The dream continues for Ballinamore Sean O’Heslin’s as they marched into the AIB Connacht Intermediate Club Final last Sunday with a narrow but deserved win over St. Molaise Gaels.

Twenty-six years after they contested the Connacht Senior Final, a new generation of Ballinamore stars produced a display full of heart and determination to shock the favourites and book a place in the Final on Sunday week, November 20.

Perhaps the players believed but few among their supporters did, judging from the comments on Sunday, and the sparse Leitrim attendance and while they were hanging on for dear life at times, there was no doubting that Sean O’Heslin’s were worthy winners.

Their reward is a meeting with Westport and the new Footballer of the Year in Lee Keegan but with the game in Pairc Sean, Ballinamore will believe their year of glory can continue and who will doubt them after this game.

St. Molaise Gaels will wonder how they lost this game as they had more than enough chances to earn at least a draw. Crucially, they never penetrated a tight defence to create any goal chance and their own failings in front of the posts cost them dearly.

They could learn a lesson from Ballinamore - seven different scorers, only two points from frees and a spirit of adventure and attacking football that had threats coming from every sector of the field.

Ballinamore’s goal summed up the game - St. Molaise keeper John Gilsenan gave a terrible handpass that was intercepted. A poor shot fell short but as the keeper advanced off his line disastrously, Peter Reynolds fielded and simply rounded the fallen keeper and defender to fire the ball to the net.

That summed up the difference - when it came to scoring, players like Keelan McHugh, Luke Murphy, Mark McGrory & Johnny McWeeney showed infinitely more finishing ability than the Sligo men and that was without the midfield powerhouse duo of Dean McGovern & Wayne McKeon.

Defensively, O’Heslin’s were well organised - they creaked alarmingly and the full-back line was in trouble at times but they never broke. Liam Ferguson, Anthony McTague lent experience with Wayne McKeon shielding the back six. Credit also to keeper Philip Farrelly who dealt with every high ball that came his way with calm authority.

With both teams missing chances, the first score came on four minutes, Niall McGovern knocking a wayward Mark McGrory shot to Johnny McWeeney who scored from a very tight angle. From the kickout, Dean McGovern won possession and surged through to score and Ballinamore were up and running.

Luke Murphy curled over a lovely point followed by a Wayne McKeon free on 11 minutes. The lead was soon five points as McGovern thumped over another lovely point.

A subdued St. Molaise burst into life with three points in five minutes, Alan McLoughlin putting over two frees and Keelan Watters scoring a great point after a run.

But Ballinamore responded and responded in style - Keelan McHugh’s tremendous run might have yielded more but he passed back to McWeeney for a fine point and Wayne McKeon followed up with a free. With less than five minutes left in the half, Ballinamore struck for their goal, Peter Reynolds showing good patience to slam the ball to the net.

The Leitrim lads looked home & hosed but St. Molaise Gaels showed they wouldn’t lie down with three McLoughlin points before the halftime whistle to leave the score at 1-7 to 0-6 in favour of Ballinamore Sean O’Heslin’s.

That lead was quickly extended when Dean McGovern scored a typical point on the run almost straight from the throw-in but St. Molaise, backed now by the strong wind, hit back with three points in the next four minutes, Cathal Herron scoring from 50 yards, Keelan Watters pointing after the kickout and Darren Gilsenan with the third.

But just when it looked as if they were in trouble, O’Heslin’s hit back as Peter Reynolds set up both Wayne McKeon and Keelan McKeon for points within a minute of each other while Mark McGrory demonstrated great footwork and handling skills as he dodged through the Molaise defence to fire over on eight minutes.

The next score saw Niall McGovern brilliantly flick the ball into the path of Luke Murphy for a fine point. Alan McLoughlin replied instantly before Ballinamore suffered two big body blows. Mark McGrory was black carded and a minute later, Anthony McTague received a second yellow to leave his side down to 14 with six minutes left.

Molaise seemed on the rise when Herron scored a great point and the gap was back to two with a McLoughlin free a minute from time. But the Sligo men never truly convinced and despite another McLoughlin free, they never looked like pulling level.

Ballinamore showed them how to do it as they worked the ball in and out of the corner, holding onto possession and eating up valuable seconds at the end of three minutes of added time before sub James McWeeney, barely on the field, popped over a well deserved insurance point.