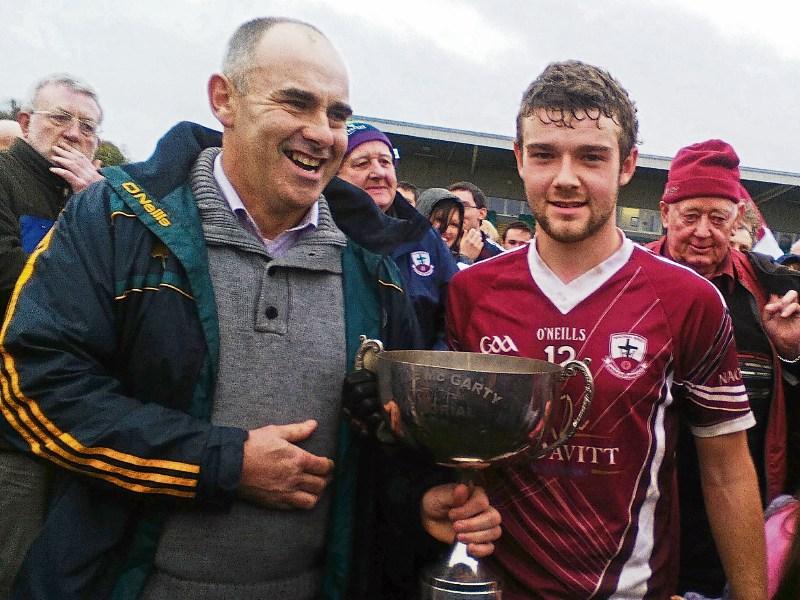 Drumkeerin dug deep to come from behind in Ballinamore on Sunday and snatch a one point win over Fenagh at the death of an exciting Dunnes Bar Division 2 Final.

Drumkeerin victory is some consolation following their narrow loss in this year’s Intermediate Final but it certainly was a game of two halves with Fenagh completely dominating the first half as they led by eight points at the break.

But Drumkeerin upped their performance in the second half and went on to pip their rivals at the post. Considering they had lost three Intermediate Finals by a point, winning this Final by a point, and an injury time score at that, must have been a huge relief for this Drumkeerin team.

The defeat, however, must be crushing for Fenagh St. Caillin's who held a nine point lead but ended up losing in added time.

Drumkeerin drew first blood with a Jamie Langan free but Fenagh St. Caillin's grabbed a decisive grip on the game eight minutes in when Ryan O’Rourke got in behind Felim McHugh and blasted to the net, set up by a pin-point Michael Doonan pass.

Fenagh stretched their lead to six by the 17th minute after Ryan O’Rourke added three points; two from play, while Donal Wrynn slotted over a 40 metres free. Drumkeerin, who hadn’t scored for 23 minutes, replied with a 25th minute Cathal McCauley free.

Fenagh added three points, Ryan O’Rourke accounting for all Fenagh’s scores, including two frees. At the break Fenagh led by 1-7 to 0-8 and increased their advantage when talisman Ryan O’Rourke fired over from play within 50 seconds of the throw-in.

But Drumkeerin then held Fenagh scoreless for the next 24 minutes as the north Leitrim side gradually clawed their way back. Cathal McCauley initiated the Drumkeerin resurgence when he put over a 34th minute free.

McCauley narrowed the gap further within the space of another minute when he popped over a point from play.

Jamie Langan gave the Drumkeerin rally a further boost when he landed a 38th minute point while two minutes later Cathal McCauley reduced the deficit when he split the posts from play.

After a 13 minute spell in the game without a score, Drumkeerin’s fightback received a major fillip when Felim McHugh flicked a dropping Cathal McCauley ball to the net on 53 minutes.

Drumkeerin now trailed Fenagh by two points but Ryan O’Rourke steadied the Fenagh nerves two minutes later when he put over a free with what proved to be his side’s last score in the contest.

Drumkeerin regrouped and started a final push that started when Cathal McCauley, free, and Jamie Langan, from play, closed the gap to a point by the 58th minute.

It was another four minutes before Colm Clarke shot a Drumkeerin equaliser from 37 metres out. Then Jamie Langan stepped up to the mark for Drumkeerin and fired over the winner a minute later.

Talking Point: The complete collapse of Fenagh’s dominance following the interval was very surprising after the south Leitrim ran rings around Drumkeerin for almost all of the first 30 minutes of the action.

Ref Watch: James McCaffrey was an impartial official. Neither team can have any complaint in this regard. Perhaps over the course of the game, James might have issued a black card or two but he judged the offences in question otherwise.

Highlight: Colm Clarke 62nd minute levelling point for Drumkeerin from 37 metres out was a spectacular score that put the north Leitrim men within sight of the Promised Land.

Lowlight: Fenagh’s inability to reignite their challenge and to produce some fireworks for almost the entire second half was puzzling. Their very polished and sure footed first half performance was nowhere to be seen for the final 30 minutes of the action.