High fielders rejoice as "Mark" to be introduced in 2017 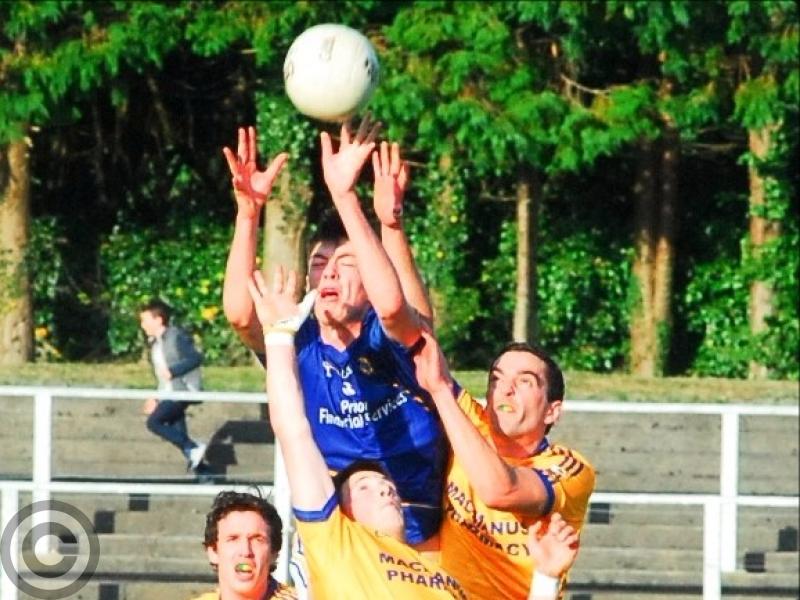 Aughawillan's Pearse Dolan makes a catch in this year's County Senior Final that will be rewarded with a mark from January 1, 2017. Photo by Willie Donnellan

Midfielders all around the country are rejoicing with the news that the "Mark" will be introduced to all gaelic football games in 2017.

Croke Park today (Monday, November 21) announced that the mark will be introduced to all levels of Gaelic football with effect from January 1, 2017 in a move that will be welcomed by fans of the art of high fielding.

The "mark" had been trialled over recent months in Division One of the Higher Education League and will be introduced to all games at all levels at the beginning of next year. The rule had been approved at Congress 2016.

The new rule states: “When a player catches the ball cleanly from a Kick-Out without it touching the ground, on or past the 45m line nearest the KickOut point, he shall be awarded ‘a Mark’ by the Referee. The player awarded a ‘Mark’ shall have the options of (a) Taking a free kick or (b Playing on immediately."

It is hoped that the rule change will reward the skill of high fielding in the game but it may mean a return to the traditional stationary midfielder of a bygone era as a quick long kickout to the middle of the park will be rewarded with a good attacking platform if a clean catch can be made.

In recent years, teams like Dublin had reduced the importance of very tall midfielders by utilising targetted kickouts to players whose key asset is mobility rather than out and out height and fielding ability.

In other GAA news, Saturday's meeting of the Central Council ratified the new agreement with the Gaelic Player's Association which will include revised Central Council guidelines for inter-county players to include suitable provisions on expenses, tickets, gear etc, as well as the adoption of a new players’ charter.

Croke Park also confirmed the return of a two-test International Rules Series which will be played in Australia in November next year. The return to a two-match series in 2017, to be played over the weekends of November 11 and 18, comes on the back of successful one-off Tests in Perth in 2014 and Dublin last year.

The GAA and the AFL have also agreed in principle to play a two-Test series back in Ireland in 2019.