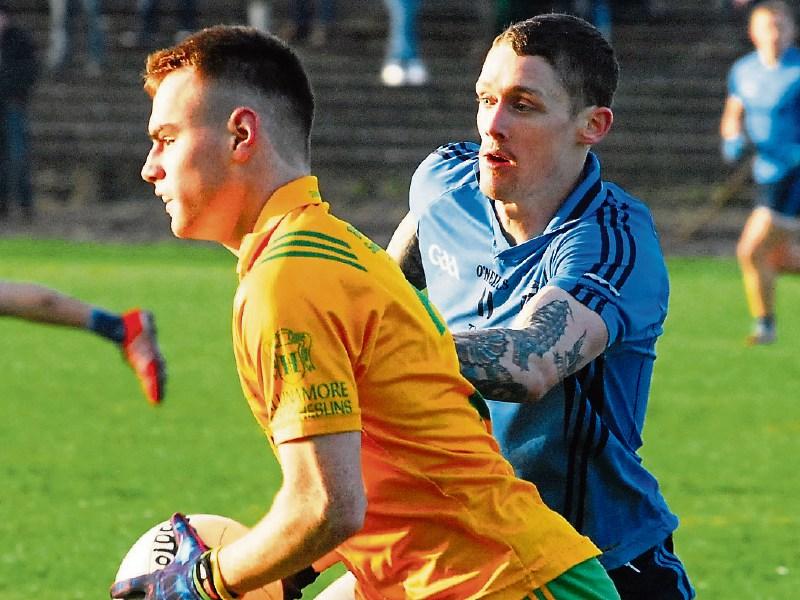 3 mins: After two wides, Westport open the scoring in devastating fashion when a poor Mark McGrory pass was intercepted was turned into a quick pass into Brian McDermott. The Westport captain left the Ballinamore defence in his wake as he surged forward and drilled a low shot past Philip Farrelly.

6 mins: Wayne McKeon hits a free wide after Keelan Dever is yellow carded for a heavy hit on Dean McGovern but Westport counter and Colm Moran solos through to score at ease.

9 mins: Lewis Cawley put over a free after over-carrying in the Ballinamore defence and another dreadful handpass led to Man of the Match Fionn McDonagh pointing on ten minutes.

11 mins: Philip Farrelly makes a fantastic save to deny Paul Lambert a goal, play coming back for a Westport free and a Cawley point.

17 mins: Another poor Ballinamore pass is swept up and Kevin Keane fed McDonagh for a quick point.

20 mins: After a poor free from Liam Staunton, who replaced an injured Cawley as freetaker, Staunton made amends with a good free.

23 mins: Ballinamore finally open their account when Philip Murphy thumps a fifty well over the bar. Unfortunately, Westport immediately respond with a brilliant Staunton free from a very tight angle out in the left corner.

27 mins: A bit of luck breaks Ballinamore’s way as they lose the ball but Luke Murphy wins it back and shows great persistence to fire over what will be Ballinamore’s only score of the game from a forward.

34 mins: After two poor McKeon shots, one from a free, and a missed fifty from Farrelly, the netminder grabs his second point from a second fifty over four minutes into added time.

10 mins: Another big save from Philip Farrelly, this time denying sub Ronan Geraghty after Westport ripped through the Ballinamore defence at their ease.

15 mins: Westport get their first score of the second half with a huge point from Fionn McDonagh after a series of bad wides.

18 mins: Oisin McCaffrey loses the ball in attack and Westport quickly find Colm Moran who turns and scores for his team’s last score of the game.

22 mins: Oisin McCaffrey combines with fellow defender Keelan McHugh to scoop the ball over the bar, although there was a tiny suggestion that the path to goal was opening up ahead of the defender.

25 mins: Wayne McKeon puts over a free but Ballinamore follow up with a couple more wides.

30 mins: The game is in added time when McKeon converts a second free for the last score of the game.