Winds of change starting to blow? 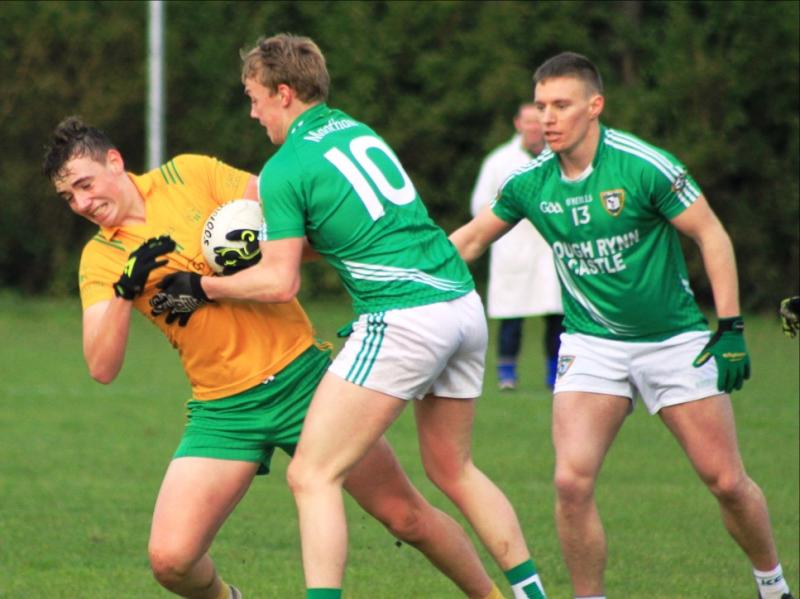 Dean McGovern of Ballinamore Sean O'Heslin's clashes with two Mohill players. The League Semi-Finals may be a thing of the past if Mohill motions are successful at Convention. Photo by Therese Foy

Are the winds of change starting to blow through Leitrim GAA clubs? The answer appears to be yes if the motions submitted for this year’s Convention are anything to go by.

Next Monday's Leitrim GAA County Board Convention will be held in the Bush Hotel (7.30 pm start) and after little or no motions on competition structures for a number of years apart from an intriguing Carrigallen motion, there are two motions that would radically restructure the Senior & Intermediate championships.

Allen Gaels and Mohill have submitted broadly similar motions but the Drumshanbo club have confined their motion to the Senior Championship while Mohill have included both the Senior and Intermediate competitions.

Both motions envisage organising the Senior Championship into two groups of six teams with random selection to determine the groups. Each team would play five games, as opposed to three in the current system, but then some significant differences emerge.

Allen Gaels propose the top two teams in each group qualify for semi-finals with the bottom teams in each group playing off to decide who is relegated. This would eliminate quarter-finals but   clubs would play the same  amount of games as in the current system.

In Mohill’s motion, the top four teams would qualify for quarter-finals with the bottom two teams contesting the Relegation semi-finals.

They also propose that if there are 12 teams in the Junior Championship, the same system would apply to that competition, a motion that would leave every team with at least six guaranteed games in the Senior, Intermediate & Junior championships.

Unhappiness over  the League sees Allen Gaels propose that a team be deducted two points for every game they concede with the deduction to take effect in the following year’s League, a motion that will  guarantee that clubs try harder to fulfill fixtures.

The Mohill club also have serious concerns over League competitions with six different motions on the Clar, including motions that would see the Division 1 & 2 Semi-Finals done away with, a motion that is sure to find favour after the elongated end to the season.

Their motions state the top two teams contest the division finals while they are also seeking that  teams in Division 1 and Division 2 be required to play at least two mid-week fixtures in order to expedite the completion of the League.

Another motion calls for the playing of all rounds of Division One and Two before the Senior Championship Final.

There are a number of motions for Congress regarding TV rights but Allen Gaels have an intriguing proposal that all motions at Congress be passed by a Majority Vote, rather than the two-thirds as present.

The full text of motions, minus those concerning underage structures, are as follows:

That the senior championship be restructured as follows: It is initially divided into two groups, with each group consisting of six teams. The previous year's semi-finalists are seeded, with two placed, following a draw, into each group. An open draw decides placement into the groups for the remaining teams.

The teams in the group play each other once. The top two teams in each group qualify for the semi-finals. The winner of each group plays the second placed team in the other group.

The lowest ranked teams in each group play in a relegation final. All regulations previously pertaining to the senior championship to be amended accordingly - ALLEN GAELS

That the top two teams in the Division 1 contest the League Final, with the bottom two teams being relegated to Division 2 - MOHILL

Senior & Intermediate Championship 2017: That the following new format be introduced for the 2017 Senior Championship: that the 12 competing teams be divided into two groups of six (A&B) numbered 1-6 in each group, each team having five group games. Random selection will be used with the first team drawn out going into Group A and the second team drawn out going into Group B and so on.

The draw for the Quarter Finals would be as follows:

The Semi Finals would then be an Open Draw.

The Relegation Semi Finals would be as follows:

The following bye-law will be applied in the case of teams finishing on equal points in the group: (c) Except where provided for otherwise in County Bye-Law or in Competition Regulation, when Teams finish with equal points for Qualification for the Concluding Stages, or for Promotion or Relegation, the tie shall be decided by the following means and in the order specified: (i) Where two or more Teams only are involved - the outcome of the meeting of the two Teams in the previous game in the Competition; (ii) Scoring Difference (subtracting the total Scores Against from total Scores For); (iii) Highest Total Score For; (iv) A Play-Off.

In the case of there being 12 teams in the Junior A Championship, the same format shall be applied - MOHILL

That the broadcasting of GAA matches be limited to free-to-air channels. All rules previously pertaining to this issue to be amended accordingly - ALLEN GAELS

That all motions at national congress be passed on a majority vote. All rules previously pertaining to this issue to be amended accordingly - ALLEN GAELS