Beirne goals do the trick as Mohill finish off Ballinamore challenge 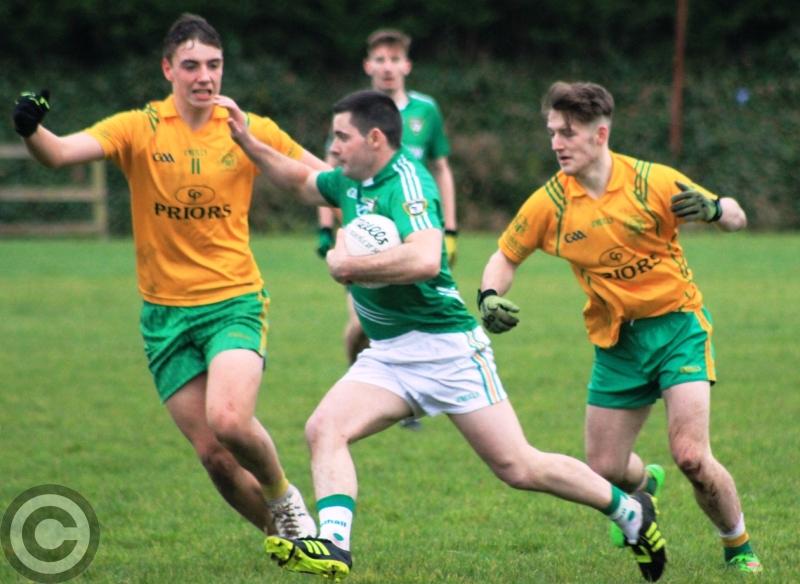 A three goal second half blitz by Mohill crushed Ballinamore's challenge in what was an entertaining Division One semi-final replay clash at Ballinamore on Sunday.

Ballinamore drew first blood when Luke Murphy shot a third minute point for the game's opening score. Mohill got on level terms and took the lead over the next four minutes after Shane Quinn and Domhnaill Flynn hit over points apiece.

Luke Murphy's second point of the day from an 11th minute free made it an even-steven situation. But Keith Beirne enabled Mohill to get their noses in front for a second time two minutes later when he the target from a free.

The Ballinamore challenge received a major boost when Mark McGrory toe poked home a 14th minute goal after a fine Paddy Connaughton run at the Mohill defence  ended up with the ball finding its way to McGrory to make his vital strike.

Mohill responded with determination to Ballinamore's goal and got back on level terms over the next six minutes with Domhnaill Flynn whipping over two frees for fouls on Ronan Kennedy and Keith Beirne.

Mohill were denied a goal when Ballinamore keeper Darren Maxwell when he advanced smartly to smother Keith Beirne's effort after Beirne was put through by a pass from Daniel Beck.

A minute later, Donal Feely put Ballinamore three to the good when he fired over from outfield.

Ballinamore keeper Maxwell, for the second time within  three minutes, denied a  Mohill goal  when at full stretch he made a fingertip save from Alan McLoughlin who was through one-on-one.

Keith Beirne closed the first half scoring in added time when he put over a free after a foul on Darragh Gordon. At the halftime break, Ballinamore led by 1-5 to 0-6.

Mohill got back in front within four minutes of the restart when Keith Beirne hammered home a goal after keeper Darren Maxwell fisted out a ball. This score put Mohill into a lead they never subsequently surrendered.

Mohill tails were up now and Ronan Kennedy stretched their lead shortly afterwards with a point. Ballinamore was rocked for a second time when an unmarked Keith Keegan slammed home a 38th minute goal after Keith Beirne's pass from the sideline.

A minute later Luke Murphy replied with Ballinamore's opening second half score when he tapped over a free. Mohill added a third goal in the space of six minutes when  Beirne again found the net on the 40th minute mark.

Over the next eight minutes Alan McLoughlin and Shane Quinn increased Mohill advantage to nine when they added a point apiece.

Ballinamore, who never gave up trying, reduced the deficit by three points in the remaining minutes of the game thanks to points by Wayne McKeon (free), Liam Ferguson (a goal chance tipped over the bar by Mohill keeper, Padraig Tighe) and Niall McGovern.

Wayne McKeon and Dean McGovern were yellow carded for separate infringements near the end.

MAIN MAN: The role of Keith Beirne in Mohill's win was major. He hammered home two  second half blitz goals as well as putting Keith Keegan through for the Mohill men's third goal.

TALKING POINT: After Ballinamore held the upperhand in the first half their challenge seemed to  run out of steam, except for a short period near the end when Mohill was already home and dry.

TURNING POINT: Keith Beirne's 34the minute goal was the match changer but if Ballinamore keeper Darren Maxwell had caught the ball he punched out to Beirne for this goal, the  game might have had a different story.

REF WATCH: Gareth Foley was an impartial man in the middle. He issued three yellow cards over the course of the hour in what was a sporting contest throughout.

HIGHLIGHT: The sparkling Mohill second half display was undoubtedly the highlight. Mohill played a very attractive brand of fast moving football and completely bossed Ballinamore with it.

LOWLIGHT: After Mohill took control of the game, Ballinamore faded very noticeably and the contest became a foregone conclusion well before the end of the clash.