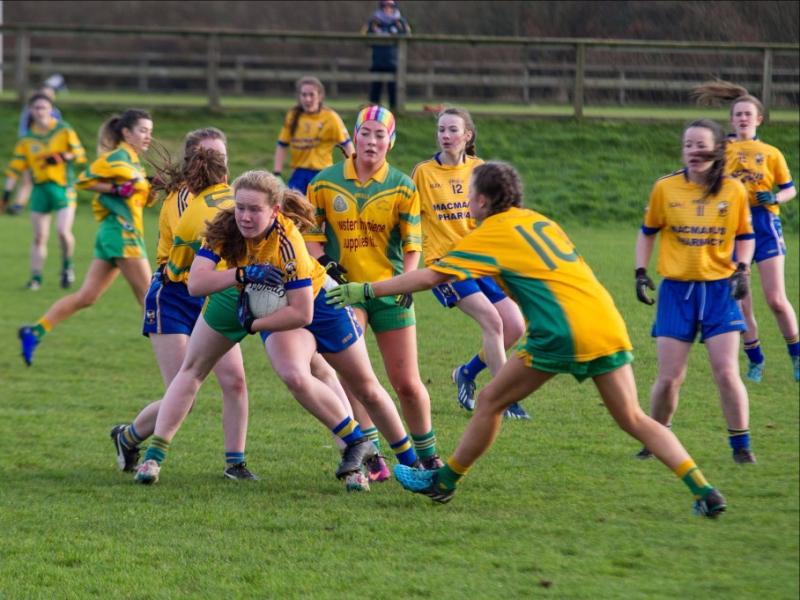 A defeat that was cruelly hard to take for players who have swept all before them, Glencar/Manorhamilton’s loss to Corofin may yet be the catalyst for greater glories in the years ahead.

A very young Glencar/Manor found the strength in depth of Corofin too tough to handle and a battle hardened Galway side were able to counter the strengths of the Leitrim champions to great effect.

In Amy O’Donovan, Corofin had a player who caused Glencar/Manor no end of problems but their defence and keeper were equally influential as they limited the influence of Muireann Devaney and Co.

Strange as it is to claim given the final scoreline, Glencar/Manor were right in this game and were it not for an unusual case of inaccuracy, they would have tested Corofin far more effectively.

Crucially, Corofin were just off the back of two hard games in the quarter and semi-finals while Manor played their semi-final ten weeks previously and the lack of competitive action definitely told as Corofin were just that bit sharper and quicker on the ball.

But Glencar/Manor, who lose just two of this team next year, definitely have the ability to make an impact in the years ahead with some incredibly talented players and they are more than capable of winning a Provincial title in the years ahead.

Corofin set about stamping their class on the game early with Chelsey Blade pointing after just 25 seconds while Amy O’Donovan started off her incredible scoring exploits with a free on two minutes.

The Galway side for a goal after just four minutes when a high ball was fielded by keeper Alva Sheridan but the ball was lost by a defender in the attempt to clear and O’Donovan and Leanne Coen combined to set up Louise Reilly for a close range goal.

Many a Leitrim team have collapsed from such a start but not Glencar/Manorhamilton and when Laoise Clancy’s deflected shot was parried away by the excellent Karen Connolly, Dearbhla Rooney rushed in to force the ball home.

Alva Sheridan made a good save from O’Donovan but the full-forward converted a free two minutes later.

But the sides were level on 12 minutes when Muireann Devaney saw her shot hit the post. Kate Johnston won the ball back and worked it to Devaney who pounced for a goal despite a lot of defenders trying to stop her. Incredibly, Corofin hit back straight away with a goal of their own, a quick free to O’Donovan freeing Louise Coen who drilled the ball to the net.

Back came Glencar/Manorhamilton - a quick free quickly transferred into Devaney who pounced to tie the scores.

O’Donovan and sub Leah Fox swapped points before a great run from Sarah Hughes, with a fortunate rebound of the ball off Manor’s Rebecca Rooney, ended with Chelsey Blade firing home to open up a three point lead.

Glencar/Manorhamilton were still pushing hard and keeper Karen Connolly made a truly superb save to deny Leah Fox a goal while Chloe Rooney saw a shot go wide after another Devaney shot hit the woodwork.

The half did end badly, however, with Amy Coen pointing and Hannah Johnston receiving a yellow card and ten minutes in the sin-bin after the break. Those ten minutes would prove costly as the 3-6 to 3-1 halftime gap was soon transformed to 5-12 to 3-2 and the game was gone.

Sheridan made a good save by deny Louise Reilly a goal  but then Amy O’Donovan went score-crazy, scoring 2-2 in less than two minutes as Manor couldn’t get out of their own half. Devaney lifted the siege with a point on four minutes but points would quickly follow from O’Donovan, sub Laura McTigue and Louise Reilly.

Incredibly, Corofin had lost full-back Sharon Coen to a yellow card five minutes in but by the time Glencar/Manor were back to full-strength, the game was over and O’Donovan would add another two frees and one from play.

Glencar/Manor kept battling with points from Aoife Gilmartin & Dearbhla Rooney while Leah Fox was on target after a good run from Devaney. However, Corofin would finish off the game with another O’Donovan free and a second goal from Chelsey Blade to seal their victory.

Main Woman: Corofin's Amy O'Donovan was the star of the show and the Galway team had a number of top performers. For Glencar/ Manor, Hannah Johnston, Rebecca Rooney, Aoife Gilmartin, Eadaoin Clancy, Dearbhla Rooney & Muireann Devaney all stood out with  Gilmartin particularly impressive.

Talking Point: Glencar/Manor were bitterly disappointed by their defeat but with only two players overage for next year, Manor must fancy their chances to lifting this title in the years ahead.

Turning Point: Corofin were  the better team but a yellow card for Hannah Johnston saw the Galway side take complete control, scoring 2-6 to Manor's solitary point.

Ref Watch: Mayo referee James Regan didn't have a lot to do. Hannah Johnston's yellow was for persistent fouling and a Corofin yellow was also correct.

Highlight: Glencar/Manor really put it up to Corofin early on, two Muireann Devaney goals real highlights and they had a few more chances to hit the net only for inaccuracy to cost them late in the first half.

Lowlight: The scale of defeat is hard to take for players so used to winning and winning well. It may turn out, however, to be a blessing for the years ahead as the pain of this defeat will drive them on.