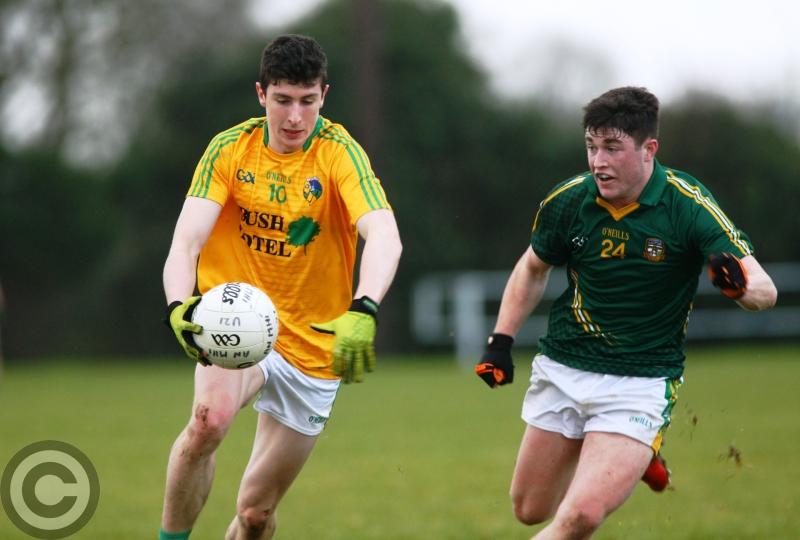 Goals win games as Leitrim learned to their cost against Meath in Saturday's Hastings Cup clash in the Meath Centre of Excellence.

Leitrim had three goal chances but Meath took three of their chances and while that might seem like a simplistic explanation, it is perhaps the best one that describes a game a lot more competitive than the scoreline suggests.

Meath were definitely  deserving winners but there were moments that they were under pressure only for Leitrim to miss some great goal chances that might have made this a much closer game.

The key moment came with Meath's second goal, a goal that came after Leitrim had recovered brilliantly from conceding a goal in the very first attack. Jack Heslin had a great chance but shot straight at the keeper, Meath on the other hand exploited a poor dropping  shot as a forward darted in ahead of a defender  to find the net less than a minute later and the damage was done.

Meath exposed holes in the Leitrim rearguard that will have to be addressed before the championship but the U21s can take a lot of solace from a good strong display when missing some key players such as Mark Plunkett, James Mitchell and Keith Beirne are reintroduced.

Darragh Rooney ensured his team-mates weren't missed too much in attack with a great display as he led the line with real aplomb but there will need to be a greater scoring input from his colleagues in future games.

Defensively, Leitrim had problems as the Meath full-forward line plundered 3-12 and could have had a lot more

Leitrim face Offaly in a must win game next Saturday where a five point win would be enough to move them into the Shield Final at least as Meath, who face Wicklow in their last game, look a good bet to top the group on scoring difference should Leitrim beat Offaly.

Meath laid down an early marker, 13 seconds into the game in fact when Ethan Devine’s powerful run cut open the Leitrim defence and a pass over the top of the last defender found Conor Moriarty for an easy goal.

Leitrim were rattled and missed a few chances before Darragh Rooney steadied the team from a free after a foul on himself, adding a lovely point from play five minutes in after a long ball saw him spin his man to score.

It was tit for tat for the next ten minutes with Rooney twice pointing in response to scores from Eamon Mac Donnachadh & Thomas O’Reilly and when Rooney pointed to tie the scores on 16 minutes, Leitrim were really threatening.

Leitrim should have taken control when Jack Heslin was put clean through on 18 minutes but he hit his shot straight at the keeper, Darragh Rooney putting over a free after a foul in the follow-up.

But Meath made the most of their escape when, from the kickout, a poor shot was rescued when Moriarty got out in front of the defender, turned and fired to the net.

It was a huge body blow for Leitrim who saw Francie Flynn drive a goal chance just wide after the Meath keeper spilled a high catch. Luke Murphy added a point but Meath took control for the closing minutes of the half as they added five unanswered points.

Thomas O’Reilly (3), Moriarty and David McLoughlin added points as Meath led 2-7 to 0-7 at the halftime interval.

Darragh Rooney added another three minutes into the second half but Meath hit back with points from O’Reilly and McLoughlin, Rooney replying from a free after a foul on the lively Ryan O’Rourke who came on as a second half sub.

Leitrim should have had a goal when Jack Heslin burst through at pace but he shot into the side netting and despite a good O’Rourke point, Meath killed off the game with a third goal, set up when Cathal McConnell broke free and set up David McLoughlin for an easy goal.

McLoughlin swapped points with Conor Gaffney and that was how the game went with the teams trading points, Francie Flynn & Conor Cullen on target for Leitrim with O’Reilly scoring twice for Meath.

David McEntee found the target for Meath, who introduced seven subs in the last ten minutes to go with their three halftime changes, and despite Darragh Rooney going close to a goal for Leitrim, his shot deflected over, the Royals finished with points from Podge McGowan and Sean Reilly.

Main Man: Darragh Rooney was one player Meath never fully got to grips with and nine points, four from play, was a great return. Francie Flynn, Jack Heslin, Keith Keegan and Luke Murphy all did well for Leitrim.

Talking Point: Meath were clearly the better team but Leitrim missed three good goal chances that might have made this game a hell of a lot closer.

Turning Point: Jack Heslin missed a great goal chance when he was through one-on-one with the keeper after 18 minutes. Barely a minute later, Meath had the ball in the net at the other end to take control of the game.

Ref Watch: Louth referee Noel Hand did a good job although confusion over the blowing of the whistle for the new mark is a problem that players and referees will have to adjust to.

Lowlight: Defensively what was evident against Wicklow the previous Monday was exploited by Meath to deadly effect.