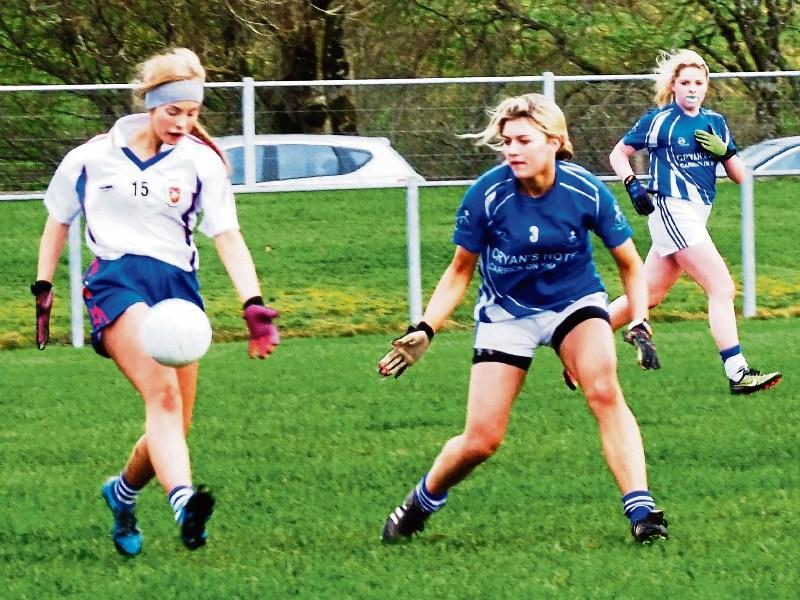 With Shauna Boyle, Lorraine Meehan and Sophie Healy causing all manner of problems with their pace, movement and finishing the opening exchanges were difficult to say the least from a Carrick point of view.

Cheered on by a vocal support the Tuam school were dominant from the opening whistle as they took full advantage of the strong wind that was blowing in Michael Glavey's pitch in Ballinlough.

The game was barely a minute old when midfielder Shauna Boyle opened the scoring with a well taken point and moments later the lead was double when the deadly accurate Ciara Maloney converted a free.

As Carrick struggled to assert themselves on the contest Scoil Bhride extended their lead with further points coming from Lorraine Meehan and another Ciara Maloney free.

Carrick were in desperate need of a score to settle their nerves but they were dealt a further blow when the Tuam side struck for the game's opening goal in the 13th minute. A Carrick attack broke down too easily and Scoil Bhride ruthlessly took full advantage with a lightening fast counter-attack.

The ball was eventually worked to Sophie Healy who took full advantage of the space in front of her as she powered forward before taking aim at the Carrick goal. Her shot looped over Carrick goalkeeper Zoe O'Callaghan but just under the crossbar.

To their credit Carrick responded well to that setback with Natasha Munnelly opening the Leitrim's schools account with a fine individual point and that was followed moments later by a second Carrick point when Aisling Leahy pointed after being picked out by Munnelly.

Unfortunately that was not to signal the start of the Carrick revival as Scoil Bhride quickly regained the upperhand.

Further points from Ciara Maloney (free) and Lorraine Meehan were followed by a Sophie Healy goal after a series of excellent passing.

With 10 minutes of the half remaining, the game already seemed to be running away from Carrick and it was to get worse for them as the deficit was extended with a Ciara Maloney point and a fine left footed goal from Lorraine Meehan.

The first half scoring was completed with late points coming from the boots of Ceiligh Walsh and Ciara Maloney (free) meaning the Galway school enjoyed a commanding 3-10 to 0-2 lead at the interval.

To their credit the Carrick players produced a much improved display after the break.

Caoimhe McGarry led the fightback from centre-back while the midfield duo of Isabella McKeon and Clodagh Sheerin had a much bigger impact on the contest.

Tuam's Lorraine Meehan opened the second half scoring but Carrick soon showed their teeth and were very unlucky to see Tuam goalkeeper Karen Connolly make a fine save from Shauna McWeeney.

Aisling Leahy's well taken point was cancelled out by a Sarah Hughes before Carrick were denied a goal for a third time, on this occasion Natasha Munnelly's goalbound shot was blocked.

Two pointed frees from Natasha Munnelly, either side of a point from team captain Roisin McGrenaghan kept Carrick's interest in the game alive, even if victory seemed highly unlikely.

Another score from McGrenaghan, either side of Tuam scores meant with 12 minutes left, Carrick trailed by 3-15 to 0-8 and they could only rue their missed goal chances.

As if to indicate it wasn't to be there day, Carrick's Aine Earley hit the crossbar in the closing stages.

Carrick certainly left the pitch having done themselves justice in the second half and they finished strongly with unanswered points from Natasha Munnelly (two frees), Lauryn McKeon and Clodagh Sheerin helping to put a more respectable look on the final score.

Main Woman: There were a number of Carrick players who stood up in the second half. Caoimhe McGarry, Hannah Reynolds, Isabella McKeon and Natasha Munnelly were all to the fore. However the decisive contributions came from the Tuam players with Lorraine Meehan and CIara Maloney both very much to the fore.

Talking Point: Goals win games! Tuam were clinical in front of goal while Carrick spurned four excellent goalscoring opportunities in the second half.

Turning Point: Such was Tuam's dominance in the first half it is hard to pinpoint an exact turning point in the game although the first goal, which arrived in the 13th minute was a real body blow as it arrived at a time when Carrick were struggling for confidence. The goal left Carrick, who were yet to score, trailing by eight points and facing an uphill battle.

Ref Watch: Gus Chapman issued yellow cards to two Tuam players which helped Carrick reduce the deficit during the second half. The Sligoman was up with the play throughout and there weren't many complaints from the sidelines with regards his decisions.

Highlight: The accuracy of the shooting from the Tuam players, particularly in the first half was impressive.

Lowlight: The second half was a lively and entertaining affair but for a Connacht Final the opening half appeared to be much too one sided.