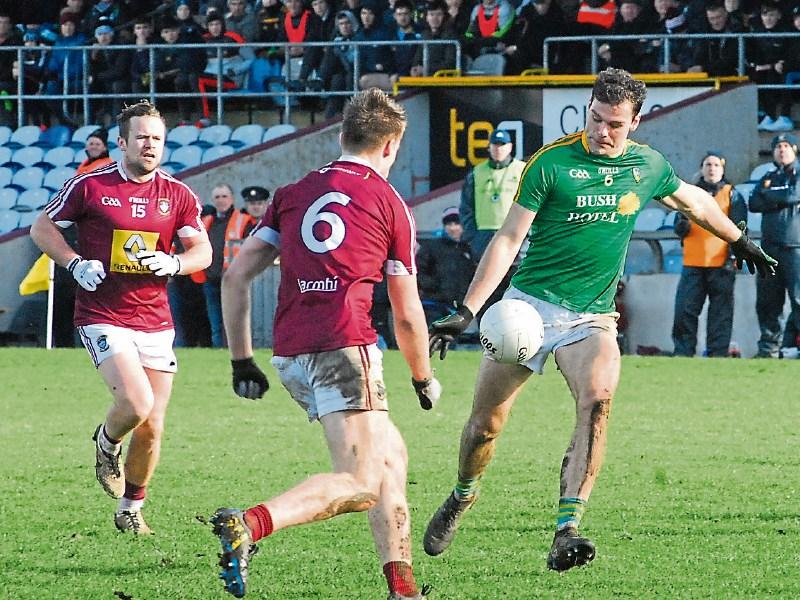 Injuries and absentees did Benny Guckian’s Leitrim no favours but they will nevertheless be disappointed by the second half collapse as Leitrim went from trailing by just four points with 20 minutes remaining to ultimately suffering a 12 point defeat.

The loss of Ballinamore duo Shane Moran and Dean McGovern meant Nevin O’Donnell and Caillin Canning were handed starts in midfield while there were also enforced changes in the half-back line with Noel Plunkett starting in place of Matthew Murphy and in the half-forward line where Ronan Kennedy and Wayne McKeon were named in place of Mark Plunkett and Ryan O’Rourke.

The changes seemed to cause confusion within the Leitrim ranks in the opening stages as players seemed to be unsure whether to press forward or sit back and the hesitancy was exploited fully by Westmeath and in particular John Heslin.

The game began with Leitrim enjoying the benefit of a strong wind at their backs but it was Westmeath who opened the scoring in the fourth minute with a John Heslin pointed free although that was cancelled out within a minute when Emlyn Mulligan pointed after Oisin Madden was fouled.

Heslin doubled his tally in the sixth minute with another successful free and shortly afterwards he further extended his side’s lead with an excellent score. A deft drop of the shoulder left the Leitrim defence exposed and Heslin took full advantage as he slotted the ball between the uprights.

Just when the visitors needed a score to settle their nerves Damien Moran scored an excellent point. Emlyn Mulligan played a short free to Nevin O’Donnell who in turn picked out Caillin Canning. When the ball was worked to Moran, the Bornacoola man displayed buckets of confidence as he pointed from 45 metres.

That score was immediately followed by another Leitrim score as Ronan Kennedy turned quickly before shooting to leave two between the sides.

Leitrim were now getting closer to the required tempo but Westmeath were up to the challenge and showed plenty of experience and cuteness as they attempted to take the sting out of Leitrim’s attack.

With 25 minutes on the clock the returning Paddy Maguire was introduced to help quieten John Heslin but that was a task that proved to be easier said than done.

Paul Sharry became the first Westmeath man other than Heslin to point when he made light of the strong wind with a fine shot to put the home side three clear and with seven minutes of the half remaining disaster struck for Leitrim.

A promising attack broke down all too easily, as was the case on numerous occasions throughout the afternoon and Westmeath took full advantage with a clinical counter-attack.

Corner-back Mark McCallon was presented with the freedom of the left side of the pitch in which to surge forward and he did just that before playing a perfectly timed pass to John Heslin who dispatched his shot past Leitrim goalkeeper Philip Farrelly.

Moments later Westmeath were inches away from a second goal when Paul Sharry’s ball across the face of the Leitrim goal was just out of the reach of Kelvin Reilly but team captain Ger Egan was on hand to pick up the loose ball and pointed to put Westmeath seven points clear.

That was quickly followed by another John Heslin pointed free before Leitrim completed the first half scoring with two booming frees from Nevin O’Donnell that left the score 1-8 to 0-5 in favour of the hosts at the interval.

Nevin O’Donnell brought that form into the second half with a successful free into the wind, which had eased significantly since the start of the game but Westmeath soon hit back with a fine point from midfielder Alan Stone and the lead was further extended when Kieran Martin pointed 1o minutes after the restart.

Leitrim needed a moment of inspiration to kick start their challenge and that duly arrived with a fine passing move that resulted in Ronan Kennedy finding the Westmeath goal. Paddy Maguire and James Rooney were both heavily involved in a move that started deep in the Leitrim half and the ball was then worked through Wayne McKeon and Emlyn Mulligan.

Having seemingly been on course for a heavy defeat, Leitrim now trailed by just four points and there was a palpable sense of nervousness around TEG Cusack Park.

That nervousness didn’t spread to the Westmeath players and three unanswered points - two John Heslin frees either side of a Paul Sharry point immediately ended the Leitrim mini revival.

Leitrim replied with an Oisin Madden point but Westmeath were now in complete control and added three further unanswered points courtesy of two from Heslin and one from Ger Egan before they struck for their second goal.

Substitute Tommy McDaniels was only on the pitch a matter of seconds when Egan's curling shot came back off the upright and McDaniels had the easy task of dispatching the ball to the net.

The game dragged towards its inevitable conclusion with Damien Moran and Nevin O'Donnell both scoring good points for Leitrim but they were cancelled out by scores from Paddy Holloway and fittingly John Heslin completed the scoring with a late free to secure a deserved win.

Main Man
John Heslin was head and shoulders above everybody else on the pitch finishing with a peronal tally of 1-11. From placed balls and from play the St Lomans man was clinical throughout.

Talking Point
The long wait for promotion from Division 4 now seems a long shot. The collapse in the closing stages of the game - just four points separated the sides with 20 minutes remaining was particularly frustrating from a Leitrim point of view while the failure to execute simple passes will need to be rectified urgently.

Turning Point
Leitrim's failure to build on Ronan Kennedy's 49th minute goal was significant. After the three-pointerWestmeath hit back with three points before Leitrim's next score to derail the Leitrim challenge.

Ref Watch
Sligo referee John Gilmartin succeeded in frustrating both teams throughout with soft yellow cards given to both sides.

Highlight
Ronan Kennedy's goal, some fine long range frees from Nevin O'Donnell, a fine score Damien Moran and the return of Paddy Maguire were positives on a frustrating day.

Lowlight
The failure to capitalise fully on the advantage of having the wind at their backs in the opening half cost Leitrim dearly.