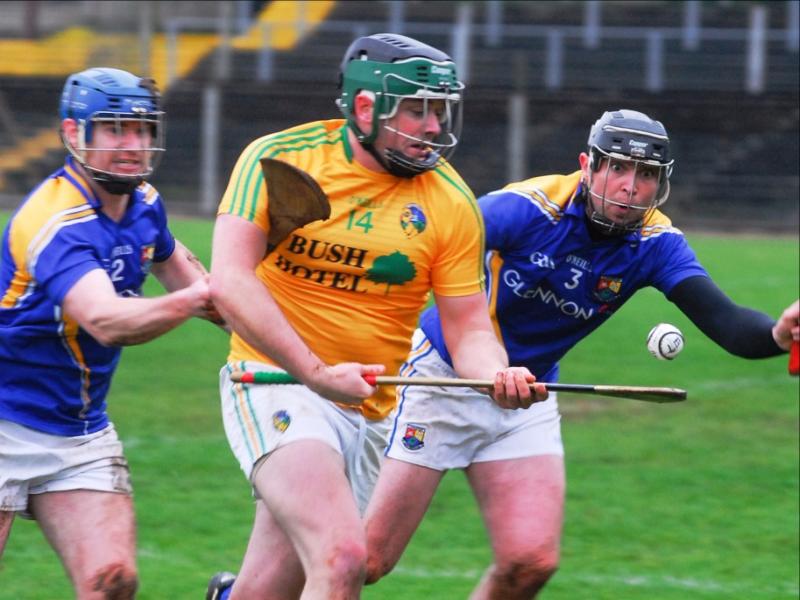 Warwickshire’s two new inter-county players for 2017 made all the difference in their closely contested game against Leitrim at the weekend.

Liam Watson and Paul Hoban were superb in the eventual two-point win against Martin Cunniffe’s men, who look better than their position on the league table of Div 3B suggests.

Leitrim had a bye for the first round, so only opened their league account against Longford in Round 2, before the journey to Pairc na hEireann this weekend.

And now Tony Joyce’s charges sit top of the table, and with just Longford left to play, look destined for a place in the league final to contest promotion into Division 3a next year.

In difficult conditions, it was not until the 14th minute that the scoring opened, as Clement Cunniffe opened his tally with a pointed free.

Warwickshire had a few runs in on goal in this opening quarter but were slightly hampered by the waterlogged section around the square, and immediately after Cunniffe’s point Conor Robbins hand pass set Liam Watson free in front of goal, but the Antrim man shot just wide.

Two further wides from the visitors came before they put some real pressure on Warwickshire, as Cunniffe’s free in landed handily for Zak Moradi, who used the momentum to power the sliothar beyond the reach of Mike Cremin, to give his side a 1-1 to nil lead after 20 minutes.

But it didn’t take long for the home side to begin to settle and Watson, an All-Ireland senior club winner with his home side Loughgiel Shamrocks in 2012 as he scored 3-7 in the final, scored from a 65, after some good work from Padraic Crehan and Colm McBride.

Building on the momentum, Ian Dwyer added one from play  before Watson, as good from play as from at the set pieces, won and scored a further two frees.

Watson would add another from play, before putting in a long ball on target goal for Sean Hennessy to attack. It got knocked into the net but goalkeeper Declan Molloy also got a knock which floored him and the goal was disallowed.

Hoban, who had played solidly in midfield up until this, claimed the next ball in midfield and burst for a spectacular run to get away from his markers in midfield to take his opening score before Watson again put in a long ball for Hennessy to try and convert for a goal.

This time Molloy was pre-empting the attack and a minor off-the-ball incident ended the rivalries between the pair for the time being.

Leitrim closed the gap to a point through another Cunniffe pointed free next before Colm Moreton scored from play to equalise. But the hosts would go in a point up as none other than Watson won a free which he duly converted to leave it 0-7 to 1-3 at the break.

Watson would open the second half with another point, before Cunniffe got the chance to pull his side ahead with a short range free, but it was blocked well by Cremin.

McBride made a great run and executed a pin-perfect pass to set Conor Robbins up for a chance, but he was dispossessed before Hoban cleared up an interception to sail his second point over.

Two more frees from Cunniffe meant that Warwickshire were not getting too far ahead, as the score stood at 0-10 to 1-5, with some refereeing decisions and poor discipline at times from the hosts preventing them from putting the tie to bed.

Leitrim would get to within a point through another Cunniffe free. Captain Donnacha Kennedy made a superb take on the half-back line to start off the hosts’ next attack, before Hoban put in a great ball to Robbins, who shrugged off his marker with ease for the score of the game.

But their side would concede another silly free in a scoreable position, which Cunniffe sent wide for a let-off, but he would not miss again and quickly redeemed himself with a point from play, after making the most of a quick ball in off of the wing.

Just like Watson, Cunniffe was particularly useful in play as well as a set-piece specialist, and the cleanliness of his jersey compared to the rest of the pitch showed he was not too easy to keep up with.

But Hoban would respond immediately with a superb point from play, before Cunniffe once again added another two frees, to leave it level at 1-9 to 0-12.

Warwickshire needed to push on and stop conceding frees in dangerous areas and kicked off their attacking comeback through a pointed Hennessy free. William Allen did brilliantly to dispossess Cunniffe next to set up the next attack.

A brilliant run from Leitrim’s Karl McDermott led to a free which Cunniffe shot over with ease to level the sides once more, but Watson struck his own free sweetly next to give them a one-point cushion again.

He would add another pointed free, before Cunniffe added two wides from set plays to fail to bridge the gap, before some great play from Hennessy gave Warwickshire the insurance they really needed for a strong finish.

A final pointed free from Watson, duly, finished the match off on a scoreline of 0-18 to 2-10, as Leitrim added a late consolation goal to leave two points between the sides.