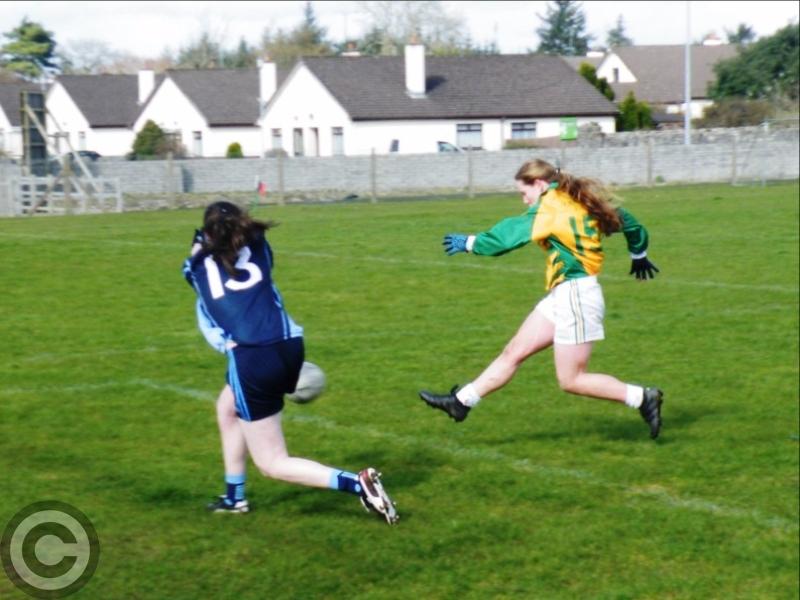 The Manorhamilton footballers who have formed the spine of the teams that have been so successful in the Scór and Féile competitions in recent years claimed more silverware last Thursday when they proved  too strong for Scoil Chuimsitheach Chiarain An Cheathru Rua in the Ladies Gaelic Football Connacht PPS Group 2 Junior C Final.

Leah Fox and Muireann Devaney were both to the fore for St Clare’s in a game that was over as a contest long before the half-time break.

While the scoring exploits of Devaney and Fox will attract much of the focus, there were some excellent performances throughout the pitch from the St Clare’s players.

Goalkeeper Chloe McPartlin will be disappointed with the goal she  conceded but the accuracy of her kick-outs more than made up for that solitary disappointment. In front of her full-back Hannah Johnston was rock solid  while centre-back Shauna Loughlin was equally impressive although her job became considerably easier in the second half as the challenge from the Carraroe side fell away.

The foundations for victory were undoubtedly laid by the tireless work of midfield duo Dearbhla Rooney and Emma McLaughlin with their dominance from the opening throw-in giving an indication of how the afternoon would unfold.

Within three minutes of the opening whistle St Clare's were already on course for victory courtesy of goals from Muireann Devaney and Mairead Clancy before Leah Fox scored the game's opening point in the eight minute.

Dearbhla Rooney scored the fourth goal  before Devaney and (free) and another of Manorhamilton's stand-out performers Emma McMorrow added to the St Clare's advantage with points.

Carraroe registered their first point in the 21st minute, a well taken point from Mary Nic Dhonncha but the game was already looking over as a contest.

Muireann Devaney replied with another St Clare's point before Sorcha Ní Dhonncha scored a slightly fortuitous goal for Carraroe but the final stages of the half were dominated by the Manorhamilton school who scored four further goals - two from Devaney and one each from Rachel Conlon and Emma McMorrow while Carraroe added only a solitary point scored by Michaela Ní Chonghaile.

Leading 8-5 to 1-1 as the second half got underway victory already looked secured but even playing into the wind in the second half there was no sign of the Manorhamilton players easing up.

Emma McMorrow scored her second goal of the game two minutes after the restart and that was followed by a precession of scores with points coming from Dearbhla Rooney (three, one free), Muireann Devaney (free) and Leah Fox before the lead was further extended courtesy of a close range goal scored by Muireann Devaney.

The Galway side replied with a  point from full-forward Sorcha Ní Dhonncha but it proved to be no more than a temporary reprieve as St Clare's quickly hit back with points from Rachel Conlon (free) and Leah Fox.

There was an evident hunger to St Clare's and although victory was long secured they kept  looking for more scores until the final whistle.

Muireann Devaney's fifth goal of the game was followed by a Leah Fox point and although Carraroe hit back with a Sorcha Ní Dhonncha point, fittingly it was St Clare's and Muireann Devaney who completed the scoring with a late point to complete an emphatic victory that ensured the Connacht title was Manorhamilton bound.

Main Woman: With five goals to her credit Muireann Devaney would seem an obvious choice but she had plenty of help throughout the afternoon particularly from Shaun Loughlin, Leah Fox, Dearbhla Rooney and Emma McLaughlin.

Talking Point: Without wishing to take away from the success of the St Clare's team such a one sided encounter was a disappointing outcome for a provincial final.

Turning Point: Two goals inside the opening three minutes set the template for how this game would transpire.

Highlight: St Clare's were clinical in front of goal throughout the afternoon and the Carraroe defence had no answer for the constant wave of attacks they faced over the course of the game.

Lowlight: Leitrim teams have been on their fair share of heavy defeats in all manner of matches at various grades so it is all enjoyable to witness a comprehensive victory for a Leitrim side. However, having witnessed many such defeats it is hard not to have some sympathy for the Carraroe side for whom reaching a provincial final was undoubtedly a big event for them but they were comprehensively beaten by a much better team.