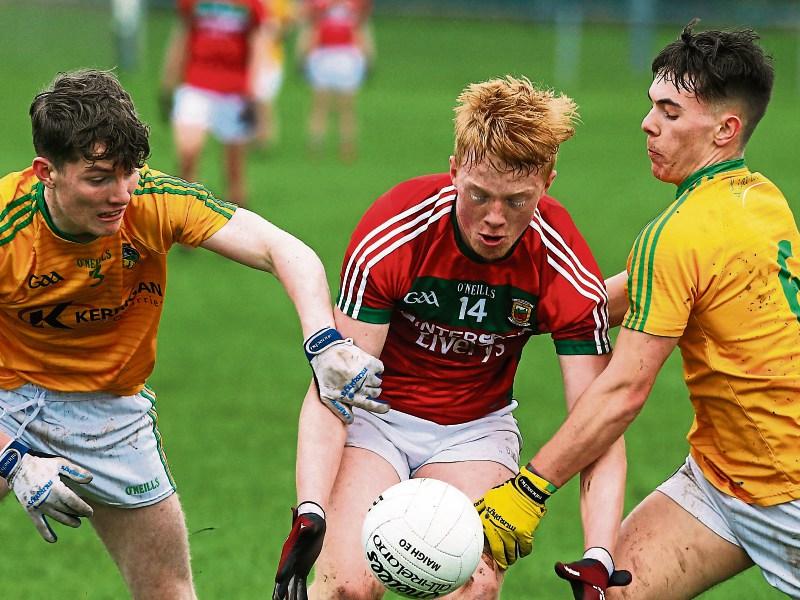 After a heavy defeat against Galway the week previous in Tuam, Leitrim made a number of changes with Shaun Chandler, normally a forward, lining out at centre-back while Aaron Hoare, Donnacha Devaney, Jordan Reynolds and Cathal McHugh all came into the team.

The changes seemed to work as Mayo, without 11 players who were involved with their school teams last Saturday, trailed by two points as halftime approached. Unfortunately, Mayo struck for their first goal and with the benefit of the stiff wind in the second half, the home side dominated to record their second win in the competition.

Playing against a stiff wind in the first half, Mayo struggled to find any early rhythm and Leitrim were arguably the better side as they led 6-4 with first-half injury time looming. But a swift counter-attacking move led to a Mayo goal in the dying embers of the first half, started and finished by the industrious Michael McGarry.

That score swung momentum in Mayo’s favour and their superior fitness and physicality helped them dominate the game thereafter.

And after half time, Mayo’s clinical forward line came to the fore. When Kuba Callaghan scored his side’s second major after 41 minutes, the result was all but secured, as Mayo’s superiority all over the field quickly cancelled out any potential Leitrim attacks.

Leitrim chalked down the opening score through powerful midfielder Caleb Duffy after less than a minute of football. But Mayo’s response was almost instant as the lively Keith Joyce landed a neat score a minute later.

With the wind at their backs, Leitrim were enjoying plenty of possession and were making inroads in the Mayo defence. Mayo goalkeeper Jamie McNicholas produced an excellent save after five minutes to prevent Seán Harkin from finishing a run from deep.

But Leitrim maintained this pressure and points from Jordan Reynolds, Peter Prior (two frees), Eoin Kenny and Caleb Duffy put them 0-6 to 0-4 ahead after 29 minutes.

Mayo’s scores during that period came from Pat Lambert (2) and Sean Keane but as the game entered first-half injury time, Michael McGarry used his pace to play a neat one-two with Seán Keane and bury the ball low past Eoin Gallagher.

After the restart, Mayo looked a much more settled unit and as Paul Towey fired over two points in the opening five minutes.

Leitrim’s response came two quick-fire points from Jordan Reynolds (free) and James Clancy but that proved to be their last score for over 25 minutes of football as the well-organised Mayo defence completely shut up shop.

Keith Joyce got his second point after 40 minutes before Kuba Callaghan capitalised on an errant kick-out and fired low to the net to kill the Leitrim challenge.

McGarry exchanged late scores with Paddy Kelly shortly before the final whistle sounded and when it did, the result was one that nobody could doubt.