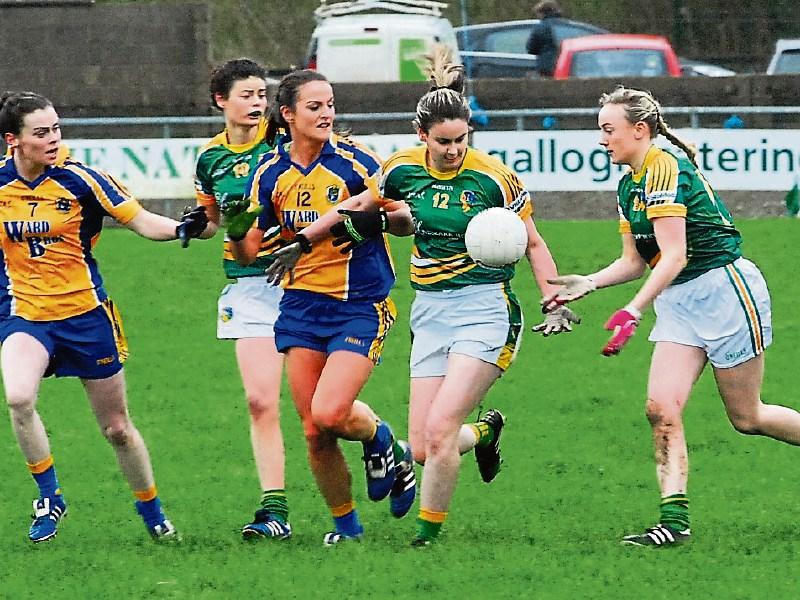 Hopes of a top four finish and progression to the semi-finals of the Lidl National League Division 3 are now hanging by a thread for Leitrim after last Saturday’s four point defeat at the hands of Roscommon in Ballinamore.

On reflection, this was a game Roscommon deserved to win but frustratingly it was certainly a game Leitrim could have won but throughout the afternoon they were guilty of basic errors, for which they were ruthlessly punished.

When looking for where it went wrong for Leitrim, the first 10 minutes were undoubtedly a contributing factor as they had conceded 2-2 before managing to register their first score of the game.

The continued absence of Aine Tighe due to injury is undoubtedly a significant factor and any team in the country would miss a player of her calibre but perhaps the Leitrim players will grow and learn from having to cope without her formidible presence.

With the likes of Ailbhe Clancy, Dearbhaile Beirne and Roisin Fowley in the Leitrim forward ranks, it is clear there is scoring power in the absence of Tighe and as the game developed it did appear as some players were beginning to take on the responsibility that so often falls on the shoulders of the Kiltubrid forward.

The visitors opened the scoring with barely 20 seconds elapsed when some quick passing left the Leitrim defence exposed and one of Roscommon’s star performers Joanne Cregg dispatched an unstoppable shot to the top corner of the net.

The lead was extended shortly afterwards when Jenny Higgins took full advantage of a defence that was not yet up to the pace of the game as she strolled past would-be challengers before placing her shot over Michelle Guckian’s crossbar.

It got better for Roscommon when Joanne Cregg evaded the attention of Roisin McHugh before slotting her shot over the bar.

Having been comprehensively outplayed during the opening exchanges, Leitrim regrouped well and came into the game as an attacking force for the first time. However, successive wides from Laura O’Dowd, Michelle Heslin and Ailbhe Clancy meant Leitrim had nothing to show for their endeavours.

Those misses were fully punished moments later when Rebecca Finan was pushed in the back by Sinead Tighe and a penalty was correctly awarded. Natalie McHugh took responsibility for the spot kick and dispatched it past keeper Michelle Guckian.

The task facing Leitrim appeared an increasingly steep one but they got a piece of good fortune just when they needed it. Ailbhe Clancy's 13th minute free looked as though it would drop harmlessly short but it dropped just under the crossbar to ignite Leitrim's challenge.

Unfortunately, Leitrim were unable to build on that score as two defenders were drawn towards Roscommon captain Natalie McHugh and she released a perfectly timed pass to the unmarked Rachel Fitzmaurice who applied a composed, low finish for the visitor's third goal of the day.

As has been the case throughout the league, Leitrim utilised the rule allowing them to make unlimited substitutions and the introduction of Kirby Gilgunn and, in particular, Roisin Fowley had a very positive effect on the team.

After Roscommon extended their lead with a point from Natalie McHugh, it was Leitrim who were the stronger for the closing stages of the first half.

A strong injection of pace from Ailish O'Dowd was matched by a precise shot over the bar and that score was followed by two points from Dearbhaile Beirne as Leitrim reduced the deficit to six points before the interval.

A pointed free from Dearbhaile Beirne followed by a Michelle Heslin point gave renewed belief to the Leitrim players and supporters that the game was very much still within their grasp.

A fine point from the excellent Joanne Cregg slowed Leitrim's momentum but eight minutes after the restart, Leitrim were presented with the perfect opportunity to further reduce the deficit thanks to a spot-kick.

After Ailbhe Clancy was denied by Roscommon goalkeeper Karin Roddy, Roisin Fowley was quickest to react but the Dromahair forward was fouled by Roddy and a penalty was immediately awarded.

In the absence of Aine Tighe, Ailbhe Clancy took responsibility and the Glencar/ Manorhamilton player unleashed an unstoppable shot to the top corner of the goal that left just two points between the sides with 22 minutes remaining on the clock.

It seemed as though that would be the moment that Leitrim would kick on but to their credit, Roscommon showed great resilience as they battled back with unanswered points from Gillian Dufficy, Natalie McHugh and Caoilinn Beirne.

Leitrim knew that a defeat would not mathematically end their top four hopes but they would have been quite aware that with games against table toppers Tipperary and fourth placed Meath still to come, a defeat would make a semi-final spot very difficult to secure.

An Ailbhe Clancy pointed free with 11 minutes to go left four points between the sides as Leitrim geared up for a grandstand finish.

A minute later, the deficit was down to a point when Laura O'Dowd's pointed effort deceived the Roscommon goalkeeper and dropped into the net.

Ultimately that was to be as close as Leitrim would get as the Rossies finished strongly with two late points from Laura Fleming either side of a Natalie McHugh pointed free securing victory.

Main Woman: Roscommon midfielder Joanne Cregg was arguably the game's standout performer. In the absence of the injured Aine Tighe, Ailbhe Clancy, Laura and Ailish O'Dowd all impressed while there was a marked increased in intensity when Roisin Fowley was introduced. Dearbhaile Beirne found the going tough against a well drilled defence.

Talking Point: Leitrim's slow start to the game proved critical as they  trailed by 2-2 to no score inside 10 minutes. A brave fightback  ultimately fell short and Leitrim were left to rue those careless opening minutes.

Turning Point: Laura O'Dowd’s 49th minute goal could have proved a turning point as it reduced the deficit to a solitary point but Roscommon finished stronger to claim a deserved win.

Ref Watch: Garryowen McMahon awarded a penalty to each side but there were no complaints with regard either decision.

Highlight: As well as all the action on the pitch, the Leitrim Ladies Gaelic Football Association used the home game as an opportunity to honour last year's U14 team who won the All-Ireland B title.

Lowlight: From a Leitrim point of view, the number of unforced errors is an area that will need to be rectified.