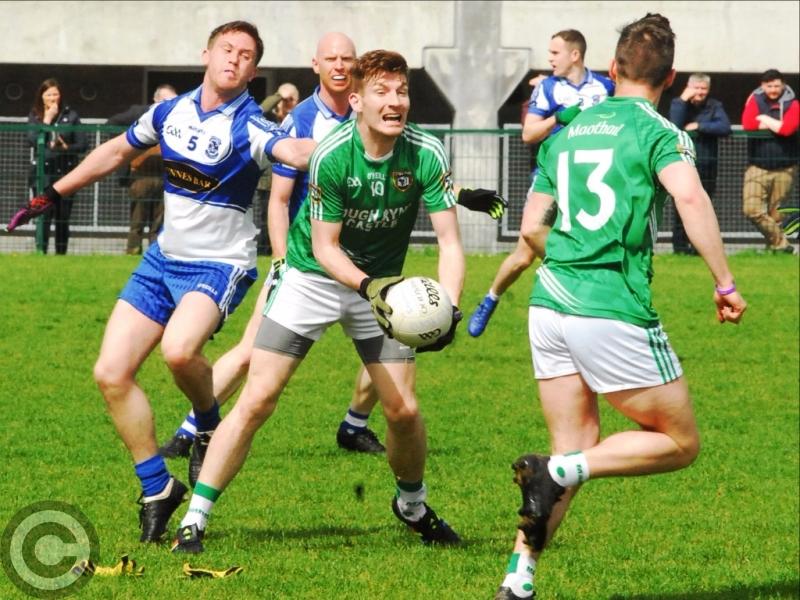 Annaduff had seen off both Kiltubrid and Cloone in their first two outings of the Dunnes Bar Division 2 campaign but fell to a one point defeat against Glencar/Manorhamilton's second string side, 2-10 to 2-9.

Annaduff actually started the best with seven points in the opening 17 minutes to just three for Ballinamore. Both teams goaled before the halftime break, leaving the visitors with a two point halftime lead.

Annaduff looked on course for the victory when, after a good save from Shane Cox, Alan Glancy found the net to leave them six points clear. Incredibly, that was to be their last score of the game with 20 minutes left to play.

With seven minutes to go and Annaduff ahead of four points, a Ballinamore penalty reignited their hope and they struck for two points to take the lead. Annaduff had the chance to force a draw but struck the woodwork.

Leitrim Gaels also fell to a shock loss as Glencar/Manorhamilton’s second string team had three points to spare, 1-15 to 1-12, on Sunday. The Gaels had started their campaign impressively but the strength in depth of the Manor men was demonstrated with a good three point victory.

Ballinaglera now have sole ownership of top spot in the table with their third win on the trot, a 0-12 to 0-10 victory over Carrigallen to emphasise their growing status as one of the Divisions team to watch as they look to improve on their third place finish of last year.

Ballinaglera have already beaten Drumreilly and Bornacoola in the campaign and face a strong Glencar/Manorhamilton second string side in round four.

Drumreilly picked up their first win of the campaign when they had a goal to spare against Bornacoola, 3-10 to 2-10, a result that moved Drumreilly above the Bors on scoring difference.

Three first half goals from Drumreilly gave them a seven  point  lead and although Bornacoola responded with goals from Anthony Mulligan and Kevin Shanley to narrow the gap to just a point, Drumreilly finished strongest to record a three point victory.

Cloone recovered after their shock second round loss to Bornacoola to see off Kiltubrid by a goal, 2-9 to 1-9. Cloone led from the start but had to withstand a strong second half fightback from a Kiltubrid team seeking their first win on the field of play.

Kiltubrid did benefit from a walkover against St. Mary’s over the Easter Bank Holiday weekend and the Carrick men suffered a third loss of the campaign when Aughavas proved far too strong, a 3-15 to 0-8 win lifting them into third place in the table.

But it is far too early to make predictions for promotion in what is already shaping up as a dogfight in Division 2.

Ballinaglera are top of the table, undefeated after three outings, with six points but Cloone, Aughavas, Annaduff and Leitrim Gaels are all close behind on four points and the promotion battle looks to be a thrilling one even at this early stage.

There is only one game this weekend with Sean O'Heslin's hosting a Leitrim Gaels team anxious to get back to winning ways. This could be a trickier game than expected as Ballinamore won't be distracted by their Senior team and may have a strong line-up out.