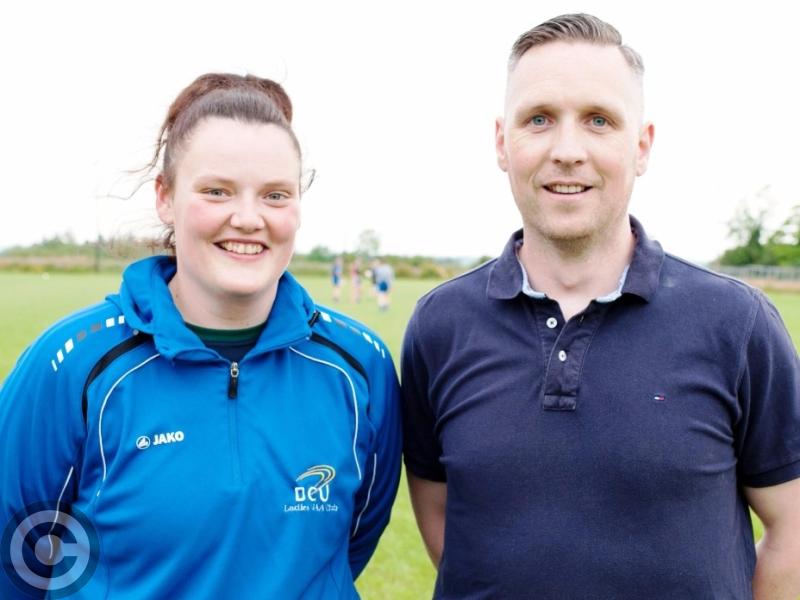 It is not too often you hear of a Leitrim manager talk of Croke Park ahead of a Connacht Final but Ladies Senior team boss Philip Brady is setting his sights high for the Green & Gold Ladies.

Leitrim take on reigning champions Sligo in Sunday’s TG4 Connacht Intermediate Championship Final in Elvery’s McHale Park (2.30 throw-in) and although Philip and his team are going all out for victory, the Leitrim manager is aiming for much bigger prizes.

“Obviously we want to win it, we want to win everything that is in sight of us but our main goal is to get to Croke Park and the All-Ireland Final. Sligo are a great team and are All-Ireland contenders. They lost last year by a point after extra-time and I watched it loads of time, they are an excellent team and they are going to be there or there abouts.

“Connacht is great to win and a reward for where we are and the work we have put in but at the end of the day, the All-Ireland is our goal and getting to Croke Park is our goal, something Leitrim has failed to do the last number of years and that is our goal from the start.”

And Philip believes that Leitrim have to rise to the challenge mentally if they are to overcome Sligo  and achieve greater things - “Obviously, it is a challenge with them because they are mentally scarred after the last few years.

“And while we have to know what the opposition is doing, and we know Sligo very well, we still have to worry about our own game and individual performances as well as the team game. We made a lot of mistakes in the League and we’ve been working hard on rectifying those in the last few weeks.

“I think if we can get our own game right, we’ll cause Sligo  a lot of problems. A performance is what we are looking for, we need to get the performance out that we’ve been showing over the last couple of weeks and if we do that, we’ll see where we are whatever result comes.”

Sligo and Leitrim have contested the last five Intermediate Finals in a row so there isn’t really anything either side doesn’t know about their opponents and it is a fierce rivalry that Philip has quickly come to appreciate.

“We got a good flavour to it in Drumshanbo a few weeks back and  it was a great game. I’ve been following Leitrim a few years now and while the rivalry is good, we haven’t won in a few years, Sligo have been dominant.

Yet Philip agrees that Sligo were far more convincing winners than their two point winning margin in Drumshanbo suggests - “I think we got a bit lucky and yet we could have won it but in realistic terms, we were about ten points off a worse team.

“Going into the Roscommon game, we were looking at where we had to improve. And we did improve to large degrees but our finishing let us down where we had to play the last few minutes.

“We were dominant for a good while in the second half and while that is good to see, I  think if we let Sligo up eight or ten points again, we’re not going to come back and that has been the main thing for the last five or six weeks, to start off better.

“For me we were ten points a worse team off than Sligo that day but it is a great challenge for us, that what we did for the last 10 minutes the last day, we might potentially be able to do for longer.”

Yet Philip sees plenty of room of optimism - “We know we are going to finish strong, our fitness is good, we’re happy with the way we are but if we go out of a game for too long a period, there is going to come a game where we aren’t going to come back.

“We’re improving all year, we’ve been missing players all year. Aine Tighe was missing all League, we’ve lost Aoife Fox who is a huge cog in our wheel, it has been a difficult year but we’ve been improving all year and when you look back, who remembers who won the National League last year?

“The aim is to get to Croke Park and it is still our aim and our aim is to improve all the time as we have been doing all year. We’ve played a few challenge matches, we have improved and we will improve for the Connacht Final.

“Whether it is good enough to beat Sligo, it is a new team. We know we have a performance in us, if we can get it out for 40-45 minutes instead of the 15 or 20 we have shown, then we’d be very confident of winning.”

That confidence is based in his team performing as they are showing in training but Philip also wants his team to lift the load off Aine Tighe’s shoulders - “If you haven’t got a panel, you may forget it. From hearsay, it was depending on Aine Tighe for years and during the National League, we had one or two great displays.

“But when Aine came back, they let her take the mantle again but the last couple of games, girls have been stepping up to the mark and it is not just Aine who is doing the main damage. That is what we have been trying to do all year.

“If they fall into that mindset, that Aine Tighe is the only one, then when Aine Tighe gets the ball and nobody helps her, the likes of Sligo in the Connacht Final can overturn her, then we’re going to lose the game.”

There may be some hope for Leitrim in the fact that Sligo fell to a surprise defeat to Roscommon in their last game but Philip won’t read anything into the result - so much so that he didn’t even watch the clash between the two teams.

As for a verdict, Philip may be thinking long term and Croke Park but the Mullahoran clubman fully believes his Leitrim team can regain the trophy next Sunday in Elvery’s McHale Park - “100%, we can beat them and we’re 100% confident we can beating them.

“They are All-Ireland contenders and that is the standard we  set ourselves, Leitrim are in a good spot mentally and physically and yes, we can beat and we’re very confident we will beat them.”

Sligo have to start as favourites but there is a sense in the Leitrim camp that they are hitting form at just the right time. The title really could go either way but Leitrim certainly have the firepower to prevail in Elvery's McHale Park.