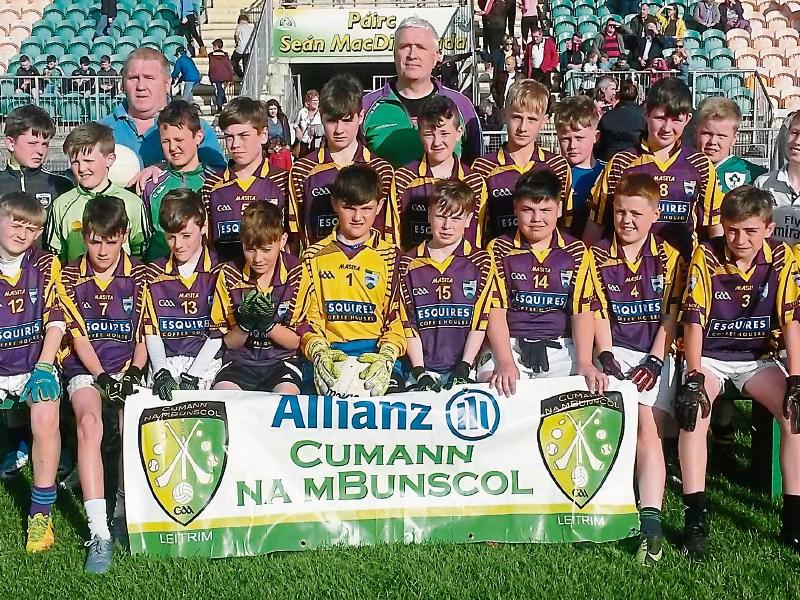 It was glory for the boys of St Joseph’s Leitrim Village as they enjoyed a merited seven point victory over Gaelscoil Liatroma in the Final of the Allianz Leitrim Cumann na mBunscol Boys Division 1 League in bright sunshine at Páirc Seán Mac Diarmada.

The last remaining final of the 20 final programme played over four days of frenzied activity did not disappoint the large attendance present.

These two teams have contested the last three finals against each other with a victory apiece but St. Joseph's seem to be gaining the upper hand as they retained the title they won last year.

The greater overall strength of the lads from Leitrim Village was the telling factor as they combined resolute defence with an attack that threatened from a variety of angles to take the Blue Riband Cumann na mBunscol title for 2017.

Gaelscoil Cora Droma Ruisc, to their credit, never threw in the towel at any stage nut in reality they had left themselves a mountain to climb after a first half that saw them trail their opponents by an eleven point deficit.

They fought gamely throughout the second period and at one stage had halved the deficit, but the Leitrim Village lads steadied the ship and ran out worthy winners.

Opening exchanges were finely balance as Jamie Rynn from play and Brian Goldrick from a free gave St Joseph’s an early lead but this was quickly cancelled out with two points from Brian O Cianaigh.

Ben Finn from play, Liam Chandler (free) and Rob Casey from play gave St Joseph’s a lead that they would never relinquish as the game moved towards the end of the first quarter.

Niall O Cianaigh replied for Gaelscoil from play but this was quickly cancelled out by another Goldrick point from play.

A long delivery was well fielded by Brían Goldrick as he turned and with impressive strength drilled to the back of the net for a crucial goal.

It was very much all St Joseph’s at this stage as they added further points from Jamie Rynn and a Chandler free. There followed a period of intense attacking from both sides with brilliant defensive work and blocking preventing certain scores.

Following a clever flick from Ben Finn that came back off the Gaelscoil post, Robbie Casey was on hand to finish the rebound to the net and a really it was going to be extremely difficult for the Cora Droma Rúisc Buachaillí to recover from this hammer blow.

Paddy Keane added a further point and in the final action of the half, Brian Cull in the St Joseph’s net brought off a brilliant save from Brian O Cianaigh, as he deflected the goal bound shot over the bar.

With a 2-9 to 0-4 lead at the turnover, St Joseph’s added to this tally with further scores from Aaron Farrell and Liam Chandler from play.

A top class strike from a Brian O Lochagáin free evaded all the cover and rested in the St Joseph’s net as Gaelscoil Cora Droma Rúisc commenced a comeback.

When Chandler added another St Joseph’s point, a point from play by Brian O Lochagáin followed by another goal flicked to the net by Diarmuid O Conaill raised the hopes of the Gaelscoil followers.

However it wasn’t to be and an exchange of points from Gerard O Muireartaigh and Ben Finn concluded the scoring.

Both teams deserve great credit for their wholesome contribution to this most enjoyable contest played in a tremendously spirited manner.

They were both very well coached and displayed all the skills of the game from blocking and fielding to score taking from a variety of distances and angles and both schools can be justifiably proud of the respective efforts of their teams in this showpiece fixture.

Special thanks to Leitrim Cumann na mBunscol PRO Declan Bohan for his assistance in covering the Primary Schools finals over the last few weeks.