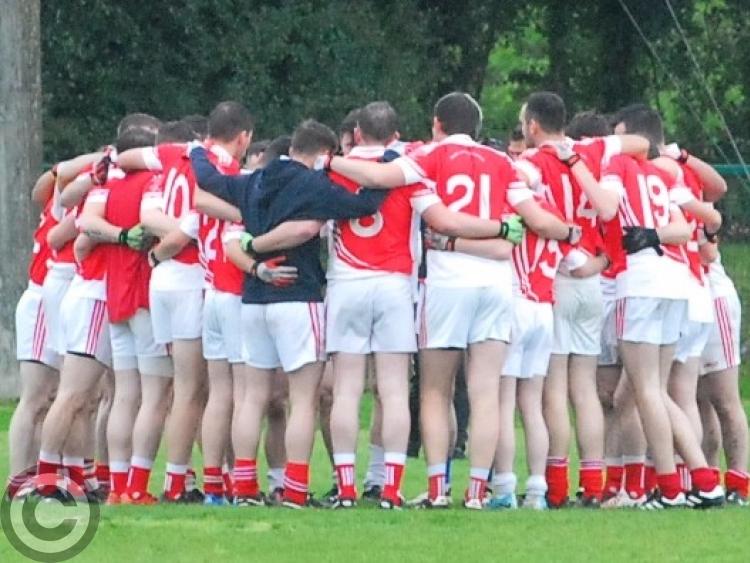 Ballinaglera finished the Group campaign with a vital win. Photo by Willie Donnellan

In a tie that finished in near darkness, Ballinaglera came from behind to claim a quarter-final place with a minimum margin win over neighbours Drumkeerin at the end of Saturday's hotly contested showdown in Drumshanbo, thanks to a Barry McGuire goal deep in added time.

Also going for early showers were Ballinaglera's Ciarán Cornyn who received a 47th yellow card and a 56th minute black card while his team-mate Barry McGuire was the recipient of 49th and 70th minute yellow cards.

Drumkeerin lead from the 15th minute until they were pipped at the post by McGuire's goal at the death. It was an entertaining encounter throughout that was marred by some slightly over robust exchanges as the second half headed to its conclusion.

Ballinaglera was on top in the opening exchanges and took a two point lead in the first six minutes when Barry McGuire and Rory McPartland hit over a point apiece. Over the next six minutes Drumkeerin levelled with points from Jerome Maguire and Darragh Flynn (free).

After that Cathal McCauley put over three points on the trot and Jerome Maguire chipped in with a point, to put Drumkeerin ahead by 0-8 to 0-3 at half-time.

Ballinaglera narrowed the gap in the opening eight minutes of the second half with brace by Seamie McMorrow from frees.

A 40th minute goal by Eddie McTiernan, after he was put through by Glen Cavanagh, helped to keep Drumkeerin in the driving seat. Over the next six minutes Ballinaglera replied with two Fergal Wynne points and one from Brendan McGourty.

Jamie Langan finished a 51st minute ball that was sent in the goalmouth by James Gallagher (Creevelea) to the Ballinaglera net, to put Drumkeerin six ahead.

Over the next 12 minutes Ballinaglera fought back and reduced the deficit to the minimum after Barry McGuire put over a point while Seamie McMorrow sent in a free from the sideline that ended up in the Drumkeerin net and Fergal Wynne pointed.

Eddie McTiernan put Drumkeerin two points up when converting a 35th minute free. Four minutes later Ballinaglera snatched a dramatic win after Seamie McMorrow drove a 45-metre free into a crowded Drumkeerin goalmouth and Barry McGuire was on hand to finished to the net.