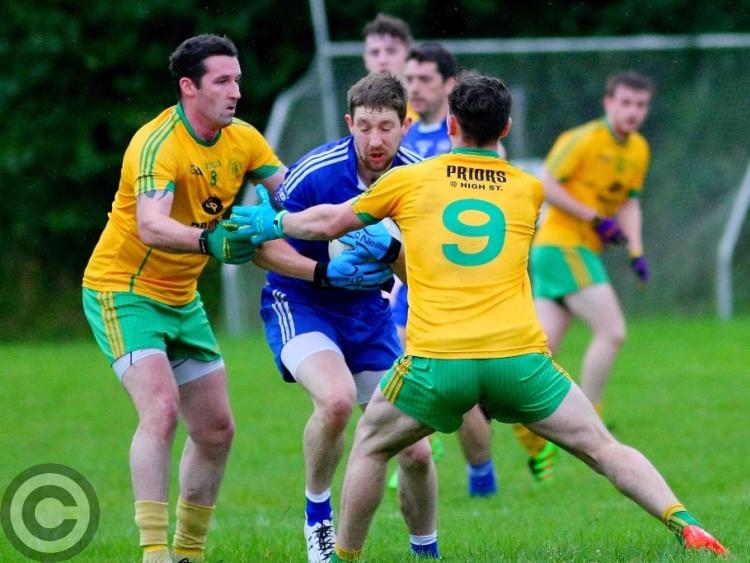 No way through as Melvin Gaels player is stopped by Ballinamore's Wayne McKeon and Dean McGovern. Photo James Molloy

A good start is half the battle and so it was for Ballinamore Sean O’Heslin’s when they hit 2-2 without reply in the opening six minutes of their encounter with Melvin Gaels in Drumkeerin last Saturday.

The Ballinamore men led 2-6 to no score after the first quarter and with the Gaels missing a number of regulars, including influential County player Darragh Rooney, it wasn’t the start the losers were hoping for.

In fairness to the Gaels, they became much more competitive for the remainder of the contest and actually outscored the winners 0-12 to 0-7 in the final 45 minutes.

But the damage was done early on with Niall McGovern causing all kinds of trouble to the Gaels; he opened the scoring in the very first minute with a fine point and followed it up shortly afterwards with a goal after good work by Brian Leyden.

The winners were coming forward in droves and it was no surprise when Peter Reynolds got in for his sides second goal and when Wayne McKeon landed two points in as many minutes, one from a free, it looked ominous for the Gaels.

Three more points followed for the Ballinamore men, the first a fisted effort from Paddy Connaughton and two from Niall McGovern, one a free to leave nine points between the sides with just a quarter of the game gone.

The losers opening score came 20 minutes in, a free from James Bredin and shortly afterwards, they almost got in for the goal they needed to get back into the contest but David McSharry’s goal bound shot was brilliantly saved by defender Patrick McLoughlin.

They did hit three of the next four points through Paul McGurrin, David McSharry and Cillian McGloin with Niall McGovern getting the winners final score of the half, a point to leave nine points between the teams at the break.

Nothing between the teams in the second half, both teams hitting over four points each in the opening 15 minutes, Shane Murphy and Peter Reynolds from play and frees from Niall McGovern and Luke Murphy for the winners with Cillian McGloin (2), Conor Sheridan and Declan Clancy all hitting points from play for the losers.

The Gaels needed a goal but it wasn’t to be but they did outscore their opponents four points to two in the closing ten minutes with Philip McGowan and three David McSharry frees ending their scoring, Luke Murphy from play and a Niall McGovern free hitting points for the winners to leave their team comfortable winners.

The Ballinamore men had already qualified but recorded full points from their five matches in a very impressive campaign and now meet Dromahair in the quarter final.

The Gaels also qualified by virtue of Gortletteragh losing to Aughawillan but face a tough quarter final encounter against St Mary’s.