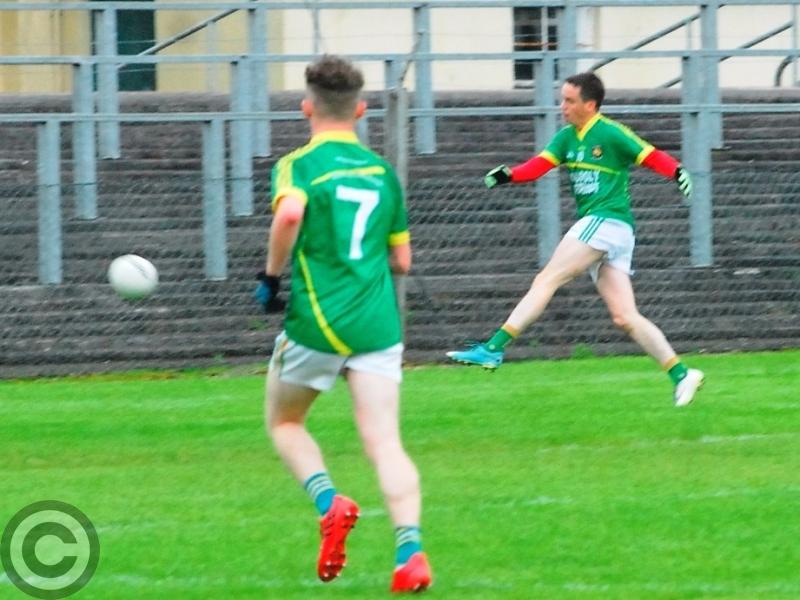 If there is a club better at defying the odds in the Senior Championship over the last five years than Drumreilly, could someone please point them out.

Despite limited playing resources and suspensions, Drumreilly again defied the odds to comprehensively see off a Bornacoola team chasing a spot in the last eight.

Bornacoola had started the best but two goals in the space of four minutes put Drumreilly firmly in the driving seat.

Bornacoola set the early pace and looked a class above as only poor finishing stopped them going out of sight with three wides in the first five minutes. Brian Conroy opened the scoring with a great point from the corner and Philip Howard added another.

But the game changed utterly on 15 minutes when Declan Maxwell’s pass over the top found an unmarked Nigel Maguire sprinting clear and his languid but precise finish gave keeper Mark McCloskey no chance at all.

Drumreilly keeper Damon Maguire did well to bat out a Brian Conroy effort while Conor McCauley shot wide and it proved costly missed as a wonderful move involving James Holohan, Conor Gaffney and Declan Maxwell ended with Donal McCabe in behind the cover and blasting to the net on 19 minutes.

McCloskey saved a shot from James Holohan but it was Drumreilly who were on top with points from Nigel Maguire and Conor Gaffney that left them 2-3 to 0-3 ahead at the break.

Drumreilly took control when good work from Peter Prior set Frank Holohan through two tackles to point after 45 seconds and Conor Gaffney added another after a short free and neat footwork.

But Bornacoola brought the match back to life in spectacular fashion when Alan Croghan, with a hint of over-carrying, fired a blistering shot from the right wing to the bottom left hand corner, cut the gap back to five points.

Damian McGuinness shot a lovely point and Bornacoola almost grabbed a second goal a minute later when his shot across the face of goal was deflected wide after a high ball had broken kindly.

Bornacoola  missed two frees and Gaffney showed them how to do with a 14th minute effort. Conor McCauley kept the Bors in touch with a spectacular effort but Gaffney fired over two quick fire points inside 60 seconds and  Drumreilly were six points clear.

Alan Croghan fired over a point after a good move on 48 minutes but despite losing Anthony Holohan to a black card, Bornacoola continued to miss chances although it took a brilliant save from Damon Maguire to deny Sean McKeon a certain goal.

With Bornacoola chasing, Drumreilly struck on the break with Gaffney firing over and it was all over for the Bors when Shane Conroy received a straight red card after an incident.

Michael Duignan put over an injury time free that was nothing more than consolation with Conor Gaffney tapping over another free after an Ollie Vaughan yellow. It ended sourly for Bornacoola as Kevin Shanley was given a straight red card after a lunge/trip on Drumreilly’s Peter Prior.

Talking Point: Just how do Drumreilly keep defying the odds and maintaining their Senior status? Far bigger clubs with more resources have failed but Drumreilly's spirit and resilience is every bit as impressive as any out there.

Turning Point: Drumreilly's first goal was a kick in the gut for Bornacoola who had been dominating the game completely up to that point. Drumreilly never looked back and Bornacoola were never the same after it.

Ref Watch: Seamus Mulhern did a good job in difficult conditions, kept control of a potentially difficult game and consulted with his officials, sending off two Bornacoola men near the end.

Highlight: Drumreilly's two goals were brilliantly taken and showed a killer instinct that simply can't be taught and ultimately that was the difference in this game.

Lowlight: Conditions made for very difficult football but some of the misses, particularly from Bornacoola, will have broken their hearts.