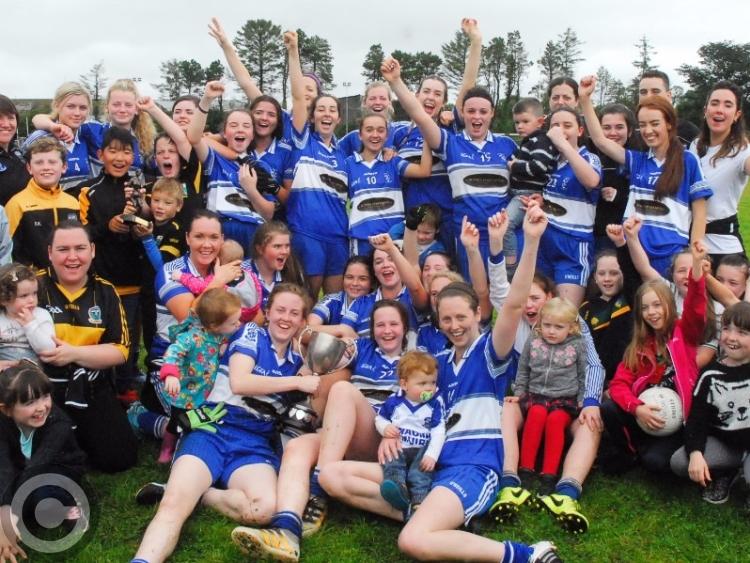 Annaduff battled and battled but they were unable to match the overall strength in depth of an impressive Bornacoola St. Mary's in Sunday's Ladies Junior Final.

Backboned by the Bruen sisters in the middle of the field and a tigerish and mean defence, Bornacoola St. Mary's certainly had the platform for success and a potent attack with threats from everywhere did the rest against a brave Annaduff.

But the tide was very much against Annaduff who lost their second final in a row as they couldn't hold an attack where Nadine Hackett, Aisling Leahy and Kelly Howard all excelled.

The platform provided by Player of the Match Kasey Bruen and her sister Elise in midfield was vital as Annaduff simply couldn't get enough ball to their own dangerous forwards.

Early exchanges were lively and sharp as Nadine Hackett and Vivienne Egan (free) swapped points but the game took a decisive turn on five minutes when Kasey Bruen’s long ball found Hackett who offloaded to Aisling Leahy and she buried the ball in the Annaduff net.

Fourteen minutes in, Bornacoola St. Mary’s pounced for a second goal when Kasey Bruen’s long range shot hit the post and fell right into the hands of Kelly Howard who goaled from close  range.

Bruen was the inadvertent provider of the third Bornacoola-St. Mary’s goal when another long range shot from the midfielder was stopped by keeper Lisa Rinn but ran right to Sandra Butler who buried from close range.

Bornacoola-St. Mary’s were on top and it took two good blocks to deny Howard goals with Rinn making a couple of good saves, including an effort from Kasey Bruen.

Those saves looked huge when a high Egan ball across goal was caught by Evie Guckian and as the defender attempted to hold her up, the Annaduff player was fouled, Egan converting the spot-kick with some ease on 23 minutes.

Evie Guckian pointed after good work from Hannah Reynolds but Annaduff were unable to profit as a nervous Bornacoola-St. Mary’s missed chances. It took two Howard free to settle them and they soon the put the game to bed.

Aisling Leahy made a great catch from a kickout and her pass was fielded by Hackett who buried from close range and Bornacoola-St. Mary’s finished the half with points from Howard & Leahy to leave them 4-7 to 1-4 ahead at halftime.

The second half would be an underwhelming affair as Bornacoola St. Mary’s were happy to maintain their advantage despite Egan opening the second half scoring with a free on 45 seconds.

But any hopes of a comeback were ruthlessly killed off when Nadine Hackett, appearing to over-carry the ball, buried the ball in the net. Aisling Leahy fired over a great point for the winners with Kelly Howard added another.

Annaduff did win a second penalty when Evie Guckian was fouled after a long ball with Egan dispatching with some ease but the impetus was gone and the game went 12 minutes without a score, Egan seeing a shot well saved by Caroline Guckian before the freetaker converted a free.

The impressive Hannah Reynolds made a great catch before hitting a great point for Annaduff on 20 minutes, their last of the game. Aisling Leahy added another point before a long ball found Hackett in the clear and she produced a great finish to put the exclamation point on the victory.

Annaduff could have had a third goal when Sinead Reynolds managed to escape close marking in added time and was fouled but Vivienne Egan miscued her third penalty.

Main Woman: Kasey Bruen was a deserving Player of the Match winner as she set the tempo of the game for the winners and was a real driving force for the winners. Nadine Hackett, Kelly Howard, Elise Bruen, Sara Crowe, Aisling Leahy & Jasmine Maye all stood out. For Annaduff, Hannah Farrell looks a real prospect while Vivienne Egan was at the heart of everything. Evie Guckian, Lisa Rinn, Sinead & Grainne Reynolds and Carmel Donelon all impressed.

Talking Point: There are already a lot of amalgamations at club level in Ladies football but it seems it will become ever more common in the years ahead as a lot of Ladies teams are struggling for numbers. It is a big challenge facing not only the Ladies game in the county but the Men's game too.

Turning Point: Bornacoola St. Mary's were always in control but a battling Annaduff were threatening to get back into the game when Nadine Hackett scored her first goal just before halftime while the winners added four points to put the game beyond reach.

Ref Watch: Kieran Moran let play flow a lot, allowed a bit of overcarrying and could have penalised a few incidents a bit harsher. But it can't be said he had any detrimental effect on the final result.

Highlight: Bornacoola St. Mary's workrate and teamwork all around the field was exemplary.

Lowlight: The game went long periods without any score and given the big population base along the N4, worrying to see these three clubs at Junior level.