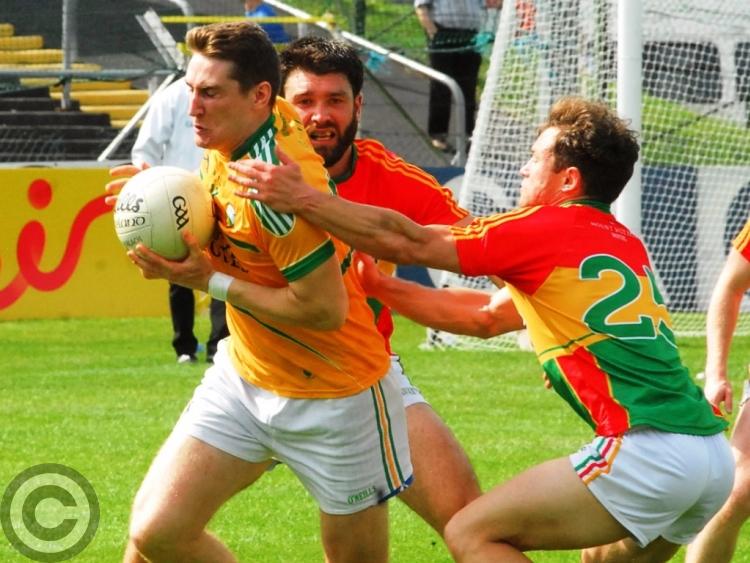 Keith Beirne in action for Leitrim against Carlow. Photo by Willie Donnellan

2017 has been a big year for Keith Beirne and while Mohill’s Connacht Gold Senior Championship Final against Glencar/Manorhamilton is occupying his mind right now, it was also a breakthrough year at County level.

The Mohill man lined out with both the Senior and U21 teams in Championship action this year and Keith admits that it took a different approach from him to this year to ensure he would get playing time.

“I suppose because I was always playing the soccer and I was playing football when it suited. This was the first year I gave up the soccer and concentrated on football. Look, I was happy with the way the year went.

“For somebody who didn’t play any inter-county football really, I was playing a small bit underage but it was always colliding with the soccer so I was never able to commit fully. This year, I was able to commit.”

And Keith paid tribute to manager Brendan Guckian for putting his faith in young footballers - “For any young lad coming up, the hard thing is will I get playing, will I get in? Obviously a manager has to trust the players who have done it before, the experienced players but I suppose Brendan didn’t have that option, he just had young players.

“He put a lot of trust in a lot of us, he didn’t care about pressure and told us if we want to do, we can do it. It is great experience for next year.”

Looking back on the year, Keith is already looking forward - “London was good, Roscommon we could have done an awful lot better and I suppose Carlow didn’t go well but it is something to build on.

“If you look at the team there, the young players are all around the same age, we all came up together so if we do stick together for the next few years, it will be very exciting to see how far we can get.”