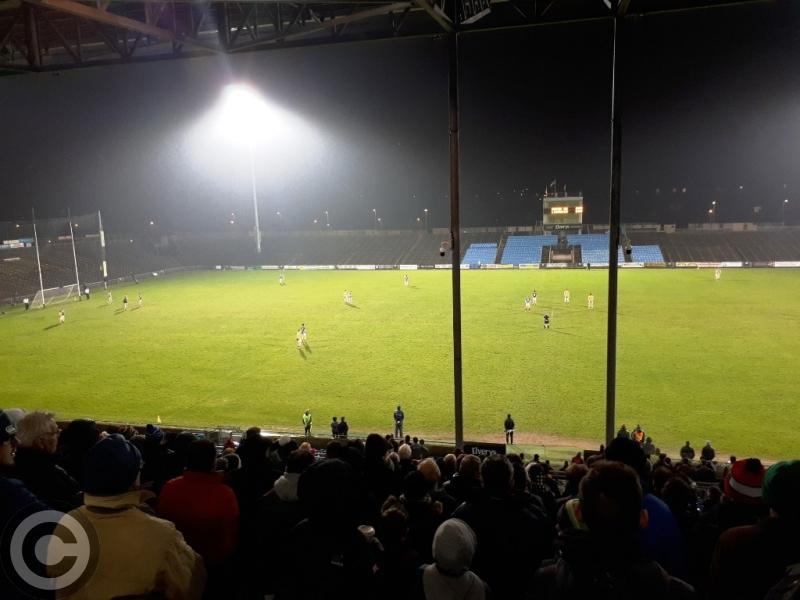 The crowd stand for the anthem in Elvery's MacHale Park

Leitrim turned in a wonderful display in Elvery’s McHale Park in Castlebar to snatch a deserved draw against a third string Mayo on Wednesday evening.

Leitrim produced a power packed 10 minutes before the halftime break to score six unanswered points and put them into a two point halftime lead.

The second half saw Mayo come more into the game as they gradually clawed back the gap, Leitrim managing just two points from Niall McGovern and Darren Carberry, and it looked as if Mayo would snatch the win as they scored four points in the last six minutes.

However, with the game in the final seconds, Niall McGovern’s lobbed ball into the goalmouth saw a combination of Brendan Gallagher and Aidan Flynn contest the high ball with the keeper and a defender, Gallagher capping off an excellent display as he connected with the ball which flew past the keeper and into the net.

It was a much improved showing from last Wednesday’s heavy defeat against Roscommon and will provide a great lift to the team ahead of Sunday’s trip to Galway.

Leitrim could have goaled with their first real attack when a long ball saw Darragh Rooney field the ball inside the square but as he turned, his shot was blocked by Mayo keeper Paddy O’Malley.

Brendan Gallagher did open the scoring with a fourth minute free but Mayo were soon showing their class with Fionn McDonagh, Ross Egan and Neil Douglas all on target inside the first ten minutes.

Leitrim had some costly wides and Colm Moreton was lucky to pick up just a yellow card after a high challenge, Alan Freeman putting over the free. Donal Wrynn and Gallagher had bad wides before Ciaran Treacy scored a wonderful point for Mayo.

A foul on Wrynn allowed Gallagher match the score but a loose pass in defence saw Leitrim concede a free, converted by Alan Freeman.

Damien Moran, on for Colm Moreton, floated over a wonderful score with almost his first touch and after Mayo missed a few chances, a quick counter-attack saw the ball arrive to Brendan Gallagher for a lovely point.

Gallagher then put over a free on 30 minutes after a foul on Darragh Rooney to leave a point in it and a clearly fired up Leitrim pushed on with Shane Quinn doing incredibly well to win the ball out on the wing, the ball ending up with Eoin Ward who scored a great 45 yard effort.

Leitrim went in front on the break once more, Keith Keegan scoring a nice point and although Damian Moran had a wide, Aidan Flynn scored a great effort on the counter attack to leave Leitrim 0-8 to 0-6 ahead at the break.

Both sides made a change at the break, with Niall McGovern replacing Donal Wrynn. Both sides missed chances as the conditions seemed to be getting the better of the teams but it looked as if Mayo would make a major breakthrough when half-back James Stratton was pushed in the back and a penalty awarded.

Diarmuid McKiernan faced Alan Freeman and the Allen Gaels man made an excellent save, pushing the ball clear to safety.

Leitrim made two changes with James Mitchell and Noel Plunkett entering the fray and Niall McGovern hit a monster free to put Leitrim three clear after 12 minutes of the half. Mayo hit back from the next kickout, Aidan Butler applying the finishing touch.

McKiernan made a good catch from a long range Neil Douglas free on 14 minutes as Mayo missed a few chances and there was a yellow for a high Brendan Gallagher foul with Darren Carberry replacing Conor Gaffney.

Mayo started to push on and points from subs Jason Gibbons and Adam Gallagher tied the scores with ten minutes left but Leitrim hit back, albeit with slight fortune, after Noel Plunkett’s shot was blocked and a Mayo player lost possession in the tackle, sub Darren Carberry chipping over a lovely point with nine minutes left.

Mayo, however, levelled with a superb point from sub Peter Naughton and they took the lead when Keith Keegan’s heavy foul allowed Ciaran Treacy put over a free three minutes from time.

Mayo pushed on with James McCormack pointing after Peter Naughton’s shot hit the post and from the kickout, Ciaran Treacy put over another point to leave Mayo three clear going into added time.

But there was one final sting in the tale when a high Niall McGovern’s ball to the far square was met by a combination of Brendan Gallagher, the ball ending up in the net to grab a deserved draw.