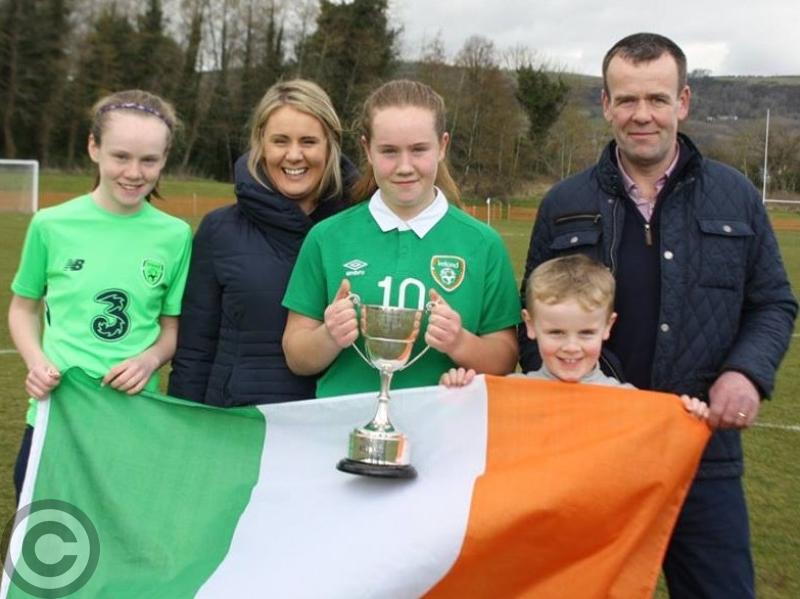 St. Clare’s Comprehensive School go for All-Ireland glory next Sunday April 15, and they will be hoping that star forward Muireann Devaney repeats her semi-final scoring exploits.

Up against a highly fancied St. Dominic’s Belfast, Muireann led the Manorhamilton school to victory in the Lidl Ladies All-Ireland Junior C Semi-Final in Clones, scoring an incredible 5-5 out of 6-6 in the process.

To make Muireann’s achievements all the more remarkable, the dual star has been lining out with the Irish U15 Soccer team in recent weeks, winning the Player of the Tournament Award in the Bob Docherty Cup.

But St. Clare’s coach James Glancy stresses that the Manorhamilton school are not a one-player team - “We have some very talented footballers all over the field, we’re not just a one person show. Muireann is an extremely talented girl, she is good at everything but we have other girls as well who get the ball up at far as her to do the damage.”

Yet James does not play down the importance of the player who was voted Player of the Match for Leitrim in last year’s All-Ireland U14 B Final - “She is extremely important player for us and it is a big benefit to have her but again you have to stress the girls at the back who did such an exceptional job in the All-Ireland Semi-Final.

“They stopped the other team from scoring and we were lucky to be able to work the ball up to Muireann and she finished things off for us.

For manager Danielle Nolan, it is Muireann’s attitude that really stands out - “Muireann is an unbelievable football player but she is such a humble girl as well. She never takes full credit despite in our All-Ireland Semi-Final, she scored 5-5 out of the 6-6 but yet she wasn’t walking around as if she had done it all, it was everybody that got that result.

“Our full-back and half-back line were of massive importance in our semi-final and the attitude of the rest of the team, that what was won it for us. Muireann always looks for someone else for the option, she doesn’t give out to her team-mates and nobody sees it as the Muireann Devaney show but she is of massive importance to our team.”